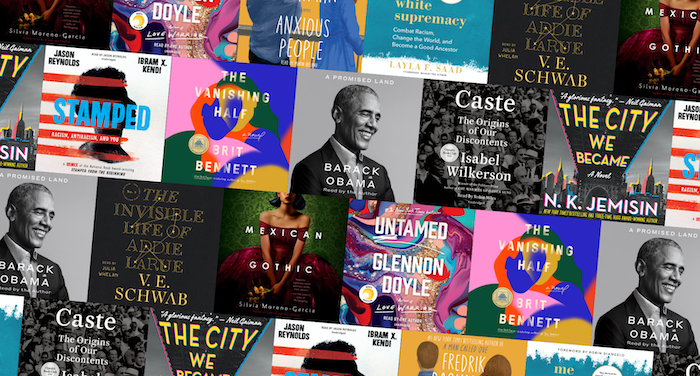 Libro.fm, a digital audiobook retailer that allows listeners to purchase their favorite new listens while splitting profits with indie bookstores, released their top 10 audiobooks of 2020. The list is based on sales of over 1,300 independent bookstores and highlights the culture zeitgeist of one of the most challenging, volatile, and unique years in modern history.

The top 10 audiobooks of 2020 explore a wide range of themes, voices, and perspectives and include about every genre imaginable. Readers were eager to enjoy memoir, anti-racism books, literary fiction, and excellent genre books.

Take a look at the list and, if you haven’t, add them to your TBR. Links go to Libro.fm, which you can sign up for and choose a bookstore to support, a monthly membership, or ala carte purchases.

It comes as little surprise to see former President Barack Obama’s memoir topping the list. With his own narration and the success of Michelle’s memoir last year, anticipation for this title has been building since Obama left office in 2016.

Antiracist literature took centerstage in June amidst marches for justice in the wake of police brutality against Black men across the US. Reynolds and Kendi’s Stamped made the philosophies and practices of antiracism accessible for young readers, while Saad’s Me and White Supremacy encouraged readers to sit down and face the realities of their racism via journaling work. Wilkerson’s long-awaited followup to The Warmth of Other Suns, Caste, captured readers looking to better understand segregation and the realities of America’s unspoken caste system.

Schwab, Moreno-Garcia, and Jemisin’s speculative fiction exploring fantasy worlds similar to and wildly divergent from our own held steady on bestseller lists and garnered praise from readers all year long.

And it’s no surprise to see Bennett’s sophomore work alongside other 2020 book club staples like Untamed and Anxious People — perhaps a book title far more on-the-nose for the year than could ever have been imagined.

Samples of each of the audiobooks, alongside praise from booksellers, can be explored at Libro.fm’s blog.