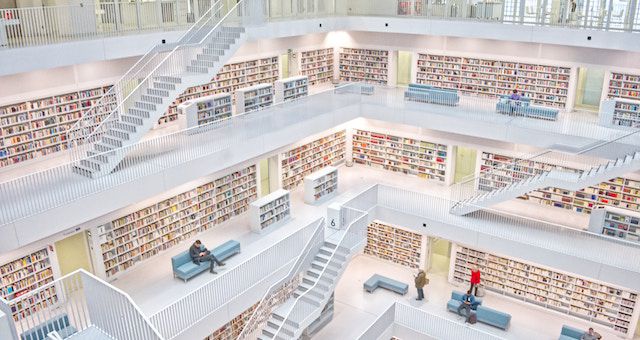 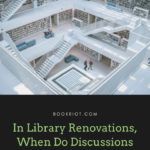 Back in October, Book Riot reported on the $41 million newly opened Hunters Point Library in Queens, which has three floors that are only accessible by stairs. This construction project began in 2010 and was completed and opened on September 12th, 2019. It is astonishing to think that in the approximately nine years of this project, planners seemingly did not consult with Americans with Disabilities Act (ADA) experts, advocates for people with disabilities, or even librarians who work with a wide range of patrons each day—any of whom would likely flag the accessibility issues with the design. When this story originally broke, the Hunters Point Library first claimed their library did meet ADA legal requirements, because their plan was to have librarians retrieve books for patrons who could not access the top three floors of the library by walking. Of course, this is not a sustainable solution, nor does it take into account consideration for the accessibility needs of librarians working in that library. 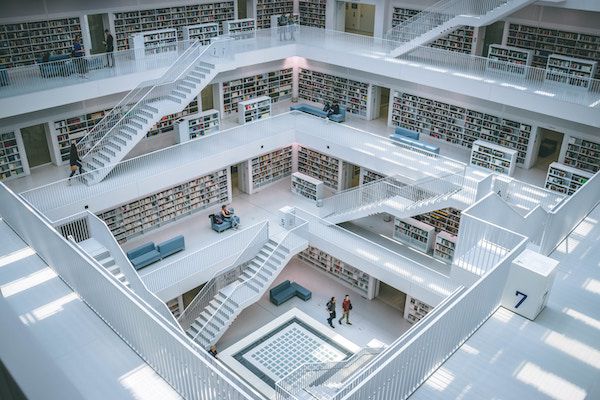 When I spoke with Sandy Ho, a Research Associate from the Lurie Institute for Disability Policy at Brandeis University, about this half-hearted solution, she wished to remind decision makers that spaces often forget to consider that people with disabilities could be patrons, but also they could be consumers, leaders, and/or employees in that public space as well.

“Our society has been by and large constructed on an ableist premise and ableism prioritizes and values non-disabled people. It is an immense privilege to presume your way of moving and being is the expectation,” she wrote.

Following the public outcries that this is not an accessible or sustainable solution for patrons or librarians, the Hunters Point Library has now announced they will move the contents of the top three floors to another part of the library. Additionally, on November 26, it became public that the Disability Rights Advocates group filed a class-action lawsuit against the Queens Public Library, the library board, and the City of New York over the Hunters Point Library. It is yet unclear what the library will now do with the wasted space that is not accessible.

I spoke with Miriam Andrus, the former executive director of the Big Rapids Community Library in Grand Rapids, Michigan, about the renovation process that occurred while she oversaw the public library there. From Miriam’s perspective, lack of space—closely tied together with accessibility—is usually the catalyst for libraries deciding to renovate existing spaces. For example, if a library runs out of shelf storage space for books, or public programming space, the creative solutions these libraries might employ to get around space limitations may no longer meet ADA requirements or be fully accessible to the public. This necessitates an addition, renovation, or building an entirely new library. In her experience, accessibility was not only addressed right at the start when a construction project idea, when the idea was germinated, it was in fact the seed that got the construction project going in the first place.

Miriam writes, “When accessibility is not at the forefront of the planning process often it become evident at the end of a renovation. If adequate spacing for ADA accessibility was not fully thought of before a project, it can become a serious problem when trying to retrofit furniture or shelving.”

Alice Wong, the Founder and Director of the Disability Visibility Project agreed, “It sounds obvious, but discussions of accessibility should arise at the very outset of any plans. When taking on a project that requires a major investment in time & money, these decisions should be integrated and made early on rather than retrofitted afterward.”

These concerns about retrofitting solutions seem to be exactly what is now happening with the Hunters Point Library. If we agree that accessibility must be addressed at the very beginning of these projects, then what could and should that process look like?

How should decision making groups address accessibility in the beginning of library construction projects?

Alice says that the answer is pretty simple: just ask. “Architects and developers should be humble enough to ask the actual communities that will be using the space what they want from it. I think public libraries are especially obligated to reach out to marginalized communities for their feedback and expertise.”

Usually in big renovation projects for these public spaces there is an “imagining” phase where a group of decision makers consult with architects and designers both about architectural design and the community needs before a single brick is laid.

For libraries looking for a model, under the direction of the San Francisco Department of Aging and Adult Services, the Paul K. Longmore Institute on Disability surveyed and developed ideas for the nation’s first city-run center devoted to disability culture. Alice Wong served on the planning committee for this project as a disability advocate. She highly recommends the committee’s final report, which provides a blueprint of what people with disabilities and other stakeholders prioritized when it comes to diversity, access, and inclusion. This report contains both process and methodology, field research, and findings. Perhaps it can provide guidance and a model for public libraries and architectural firms consulting their communities in a meaningful way before beginning a construction project.

Seeking diverse community input is already a standard practice in the D.C. Public Library system, which is currently on its 23rd library construction or renovation project. Jaspreet Pahwa, from the Capital Planning & Construction team with the D.C. Public Library, explained that community engagement is the starting point of all their funded library projects. In fact, “focus groups with library patrons who have faced barriers using our libraries have informed the design for the modernization of Martin Luther King Jr. Memorial Library, as well as the Facilities Master Plan that will inform the future of the library built environment over the next decade.”

Pahwa also acknowledged the potential barriers to participation in community engagement meetings that people with disabilities may face. This is why her team employs a variety of engagement tactics including multiple public meetings, online and physical surveys, and focus groups.

But is it possible to make any public space accessible to all patrons? Even really old, historical spaces?

Let’s set aside for a moment that the Hunters Point Library was brand new construction. Often when the practicality of making public spaces more accessible  is drawn into question, historic or old spaces are a sticking point. Jaspreet Pahwa admitted that in modernizing historic buildings, “one of the first and significant challenges is creating a universal entry experience for all our patrons.” Many of the D.C. libraries are built on tight urban lots. The historic buildings often also have steep steps and heavy front doors. Each site is unique, she says, “and connecting the original entrance via a ramp—thus a a universal entry experience—is a challenge that has been overcome at some but not all [of] our historic libraries. Other historic renovation challenges have been overcome by creating open lines of sight, easy to navigate spaces with a high quality of natural and artificial light, reducing the number of doors, and sensitively designing doors.”

Miriam Andrus pointed out that small libraries especially are often put into old schools, strip malls, or other buildings that were not originally intended to be a public library. However, she believes that if the whole team working on the library “had the goal to improve accessibility of their libraries and took action to do so, more people would be using the services they provide.” Indeed, the library that was renovated under Miriam Andrus’s tenure as executive director was located in an old school, and their architectural team managed to make the space accessible.

Likewise, Sandy Ho told me about bookshops she’s visited that were built in the late 1700s, yet had step-free flat entrances and elevator access installed. Like Sandy said, she doesn’t expect changes to happen in all public spaces overnight. “But the question of ‘who gets to be public and who doesn’t’ should be front and center. Historical spaces hold so much value and meaning in our society that should also be accessible to people with disabilities to experience.”

And of course accessibility goes beyond physical accessibility, inclines, and actual brick and mortar structure.

In their responses, all parties also acknowledged that accessibility goes beyond physical accessibility. Beyond just being part of design plans, Jaspreet Pahwa feels that accessibility, plus sensitivity, inclusiveness, and an ongoing quest for understanding, are central to bettering our society.

As Sandy Ho said, “The Americans with Disabilities Act was passed in 1990 and it is frustrating that nearly thirty years after its passage so much of our understanding around access begins and stops at doorways. To me, true access means that in the design and planning of any space, program, service, event, and public spaces, people with disabilities are presumed to be present.”

She reminds us, “There is power in being able to exit a place in the event of an emergency. There is power in being able to access services and resources just as anyone else does, without needing to disclose your disability. In a world with true access, there is no separate standard for some people, because there is no standard way to exist as a human.”