If you work in a public library, you are already probably familiar with the LibraryReads lists, which are issued every month. For those readers not familiar with LibraryReads, let me provide a little background. The lists were created in September of 2013 as a way for librarians to vote on and share their favorite new books being published during a particular month. Every month, the committee would release a list of the 10 most popular books, as voted on by librarians, and then librarians would have a new way to share the hot new titles and hidden gems with their patrons and with each other.

It’s a great idea in theory, and I was really excited when it first came out. There were some interesting books on the lists, and I found a couple new favorites that I probably wouldn’t have otherwise discovered on my own. But then as the list reached its second, and then its third anniversary, I started feeling disenchanted with the list, but I couldn’t exactly put my finger on why. It just felt like each month’s list was…more of the same. More historical fiction set in the early 20th century, more book-club-friendly fiction, a lot of mystery series and psychological suspense novels, mega bestselling authors like Nora Roberts, Lee Child, and Debbie Macomber showing up on the list with some regularity. It didn’t feel fresh or all that interesting anymore.

It wasn’t until I started writing for Book Riot and making myself pay attention to author diversity that I realized, “Holy hell, this list is SUPER white.” In fact, it started nagging at me so much that I decided to do some major data collection. I went through every list since September 2013 and recorded the title, author, author gender, genre, and whether or not the author was an author of color (AoC), which I defined as someone who was not of white European descent. This is an imperfect definition, of course, but it serves an extremely illustrative purpose, which I’ll show you below. But first, here are a few other things I noticed when I started analyzing the data:

* General fiction was a sort of catch-all category, comprised mainly of literary fiction, so-called women’s fiction (even though I, and other Rioters, hate that term), and other books that defied a specific genre category.

**These genre classifications are imperfect, and there are definitely certain titles where one could argue that these books should be categorized as historical fiction rather than romances, but I’m not conducting a scientifically valid analysis here – I’m illustrating a point. 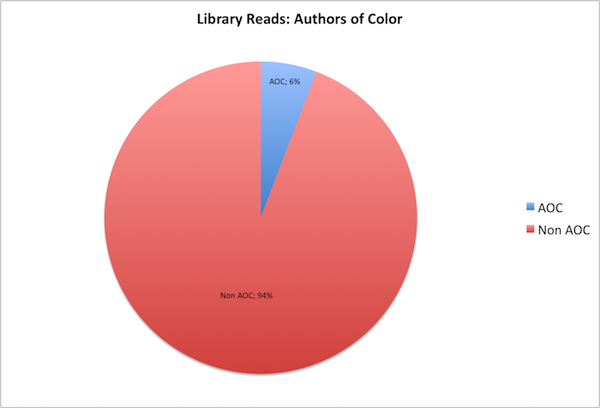 Here’s how it breaks down by year:

I want everyone to look at those numbers. In 2015, there was a 6 month gap when the LibraryReads lists featured exactly 0 authors of color. That’s 60 titles, and out of the dozens of books published each month, there wasn’t a single book written by an author of color that librarians wanted to nominate? I suppose you could point to the 2017 numbers and say, “We’ve already matched the highest number of authors of color mentioned per year and we’re not even halfway through the year yet!” but if you honestly think that these numbers are worth celebrating, it’s time you took a long hard look at the books you read. There are nearly as many historical fiction novels set during either of the World Wars on the lists (24) as there are books written by authors of color (25).

This isn’t a problem we can blame entirely on librarians. It’s already well-established that the publishing industry is strikingly white and unfriendly to diverse authors, and if you compare the LibraryReads lists to the marketing materials put out by the major publishers, you’ll see a lot of familiar titles and authors that make both of the lists. The publishers do a big push on certain titles, which are the books that librarians have easy early access to, and suddenly we have lists full of predictable titles.

Now, I want to make this clear – there is nothing inherently wrong with these books as individual titles. If you enjoy psychological suspense, by all means, read that. If you love reading Debbie Macomber or Michael Connelly, you do you. Popular books aren’t bad. But these lists aren’t just about individual reading tastes. They’re a representation of what librarians as a collective enjoy reading. They’re meant to introduce patrons to new titles by giving them the librarian “stamp of approval,” and they’re meant to act as a collection management tool. But who are they helping really? Do your patrons really need to know about the new Nora Roberts book? Because if your libraries are anything like mine, your patrons already know about these titles! And how helpful of a tool can these lists be if they’re just providing librarians with the same general selection of books month after month?

I think the concept of this list is great and that the program began with nothing but good intentions of sharing books with the community. But LibraryReads fans, it’s time to take a step back and look critically at these lists. Are they really helping us? Or are they just validating our own whitewashed choices in books, whether they’re the books we purchase for our collections or the books we choose to read in our down time? No tool is perfect, but considering this is a tool created by librarians, we have a lot of work to do. We’re librarians, and we can find way more diverse titles to read and recommend. There are no excuses.