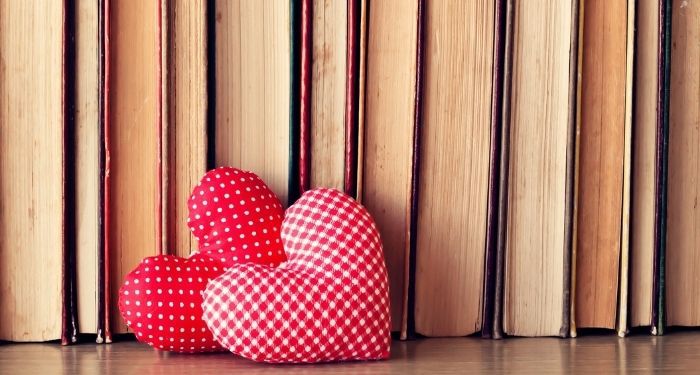 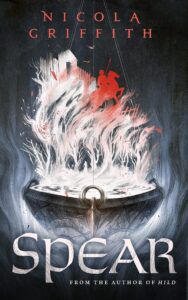 She left all she knew to find who she could be... She grows up in the wild wood, in a cave with her mother, but when she hears a traveler speak of Artos, king of Caer Leon, she decides her future lies at his court. Brimming with magic and eager to test her strength, she sets out for Caer Leon. With a stolen hunting spear and mended armour, she begins a journey of magic, mystery, love, lust and fights to the death. She will steal the hearts of beautiful women, fight warriors and sorcerers, and make herself a home.

I didn’t set out to become PCPL’s Resident Romance Librarian.

(That’s not a real title, but if it were, I would take that job in a heartbeat.)

In fact, when I started at my current job six years ago, I wasn’t sure if my reading habits actually mattered. While I spent a few hours a month working the desk at the main branch and maybe a couple hours at a time visiting other branches, my work was primarily behind the scenes. I was there to manage online resources and help out with the library’s website and intranet. (And maybe do a few other things, but scope creep is a different essay.) But a few things changed that allowed me to let my freak flag fly, as it were. And the library’s go-to romance person emerged.

Let’s take a few steps back.

I started reading romance as a precocious 11-year-old. I picked up the books my mother read when she was done, curious of her interest. I took a few breaks to read things like the entire Anne Rice and Jennifer Roberson catalogs, and spent the entirety of graduate school reading Pride and Prejudice and Twilight fan fiction. But I picked them back up to escape the daily doldrums of my first library job, and never looked back. I wouldn’t call myself an expert, because it’s hard to be an expert on one of the most varied, expansive genres in literature, but I do consider myself well-versed, for my own sake and for the sake of anyone who will listen. For a while, I wasn’t sure if those listeners existed in the library. There was an imbalance in the people I knew who had more than a passing knowledge of romance, or even a grudging respect for the genre.

Early in my PCPL career, I joined the library’s readers advisory team — the group dedicated to not only sharing the knowledge of good books amongst each other but working on the best practices for keeping up with books and recommending them to our customers. The last hour of each meeting involved a round-robin book share, and I spent a lot of time making sure I always had a book or two to discuss that weren’t romance novels.

I slowly started to include them when it was my turn. One month I’d throw out Alyssa Cole or Beverly Jenkins. A few months later, Sarah MacLean. Courtney Milan. Tessa Dare. Alexis Daria. Talia Hibbert. On and on I went, until I was offering up at least one romance recommendation a month. I’m not sure if any of the other librarians picked anything up, but they didn’t sneer at me. (At least to my face.) There was one staff member, in particular, who still sort of rolled her eyes at the idea of romance…but thankfully, the Book Snob retired and we could all have a little more fun.

When we implemented a new format to build out our genre knowledge, I made my move. We were going to do primers and presentations on various genres, and I was going to go first. I made a Romance 101 for the ages (which I eventually made into a blog post for my library’s website…one that I definitely need to update). In my presentation, I gave more examples and broke down the genre into even more tropes and sub-genres, and eventually gave my colleagues homework. Hopefully everybody went and checked out at least one romance novel. As I continued to talk about the romances I was reading and intended to read with my readers’ advisory folks, they got more comfortable with the idea that the books had some merit.

Meanwhile, the library’s website platform made for more and more allowances to produce content. Cue me, making lists and writing blog posts. Any staff member was welcome to do so as well, and it was nice to slowly see people adding more and more romances to their lists as the years went by. I was still the primary person to make those lists and other content, but they were getting made, used, and referenced. (And to note, when I was trying to make a list, if there were romances we should have that we didn’t.) So there was that!

And then, right before the pandemic, that same group of people planned to create a new online service: personalized reading recommendations. It would be broken down into personae who would recommend for specific genre requests, and I couldn’t help but name the avatar for romance Aphrodite Jenkins. (Damn right, I did.) I’m not the only one who recommends books requested under that persona, either! There are others who openly read romance now! Look how far we’ve come!

Nowadays, romance is practically part of my personality, and I’ve become the go-to person when it comes to creating romance content and getting romance recommendations. If somebody needs a good rec to add to a list, they come to me. Just today, multiple people came to me as the “friend with different reading tastes” for the Read Harder task that we do bimonthly. And I’ve lost count of the number of times that I’ve been “blamed” for getting someone (on the team or not) hooked on reading romance. (Sometimes they even tell me what to read!)

Because there’s nothing like getting an email from a colleague claiming they never expected to try romance but my enthusiasm when discussing them regularly inspired them to pick one up.

One down, six hundred to go.