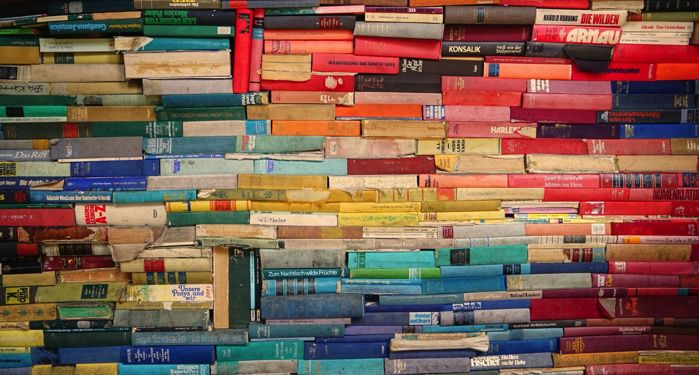 Many of the biggest joys in my life relate to LGBTQ+ books. That includes reading them, writing about them, and connecting queer readers with queer books! I feel privileged, honored, and lucky to get to do that work as a librarian and writer. In addition to Book Riot, I have my own book blog, Casey the Canadian Lesbrarian and a monthly column on Autostraddle.com called Ask Your Friendly Neighborhood Lesbrarian.

As a queer woman, books by and about queer women are the most special to my heart. As a bisexual woman, I’m particularly interested in books by and about bi+ women. I’m also committed to reading and promoting books by and about underrepresented groups in the queer community: trans women and men and nonbinary, asexual and/or aromantic, intersex, and Two-Spirit people.

Some days I still can’t believe it when I get publicity emails from publicists offering me FREE review copies of LGBTQ+ books. They are often advanced reading copies available before the book even officially comes out! After almost a decade of writing about queer books on the Internet, I get a fair amount of these emails. I especially get them in the month of May, as publishers are looking specifically at their LGBTQ+ titles for June, Pride month. In fact, I received four such emails just in the last week. I was excited about those emails, and the others that arrived in my inbox in May. And then I was disappointed.

Why was I disappointed, you ask? Because the books marketed as “LGBTQ+” did not, in fact, live up to the name. The reality, unfortunately, according to the emails I received about Pride month books, is that “LGBTQ+” meant 80-90% content about cis gay men. There was usually a little lesbian content thrown in (as a treat?), little to no bi and/or trans books, and nothing that might be indicated by the +, like ace or intersex. Why is it that when book publishers and publicists say LGBTQ+ books, what they really mean is gay and cisgender?

That’s partially a rhetorical question. I know the big, overarching reason why. It’s the patriarchy and cisnormativity/cissexism (the assumption that everyone is cisgender and that being cisgender is superior to being transgender). But given the fact that the term LGBTQ+ is a literal acronym comprised of letters that stand for different identities under the queer rainbow, I find it baffling. Why use an acronym to describe a group of books when it clearly doesn’t apply?

I am forced to conclude that people are simply using LGBTQ+ as a synonym for gay. But the acronym exists so that we could be more inclusive of queer identities other than cisgender gay men, and books don’t magically become more diverse because you call them LGBTQ+ instead of gay. That makes the publisher or publicist look, at best, ignorant of the actual content of the books they are promoting, and at worst, deliberately misleading, trying to appear more inclusive and diverse than they actually are.

I think my frustration is obvious. As I wrote above, I’m a queer woman who writes mainly about books by and about queer women. I tell this to publicists explicitly. So when I get an email asking if I’m interested in reviewing any of the books on a list where the majority don’t fit in that category, it’s a waste of my time and theirs.

I would like to ask publicists and publishers to examine what they are publishing and marketing as “LGBTQ+.” When you look at the books under that umbrella, do they really represent the acronym? Or should you call them GGGGL? (I’m focusing on diversity in terms of gender and sexual identities in this post, but I don’t mean to underestimate the importance of also centring intersectional identities. This means publishing and promoting more LGBTQ+ books by and about people of color, disabled people, non-Christian religious folks, and other underrepresented groups.)

If the so-called LGBTQ+ books don’t actually deserve the name, why not label them more specifically? It would show where some of the gaps are. It would also highlight specific representation so that queer books can be best matched with the queer readers and reviewers who are interested in them. If you mean gay books, just say gay books! (Side note: I also sometimes see well-meaning reviewers labeling a single book or character “LGBTQ+”. Please be specific instead unless you actually mean L + G + B + T + Q + other identities).

In short: don’t use the acronym LGBTQ+ for books unless you really mean it. Seems simple enough, right?

Don’t miss all the LGBTQ+ books content on Book Riot. You can also check out what I’ve recently written about new queer women romances and 2020 bisexual women books.