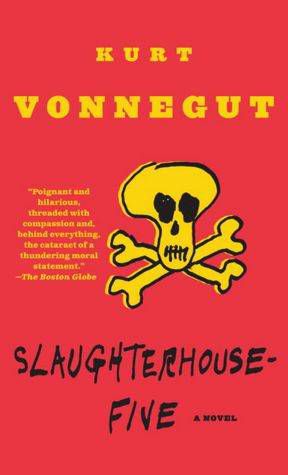 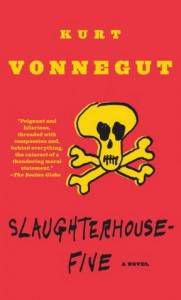 Slaughterhouse-Five, first published in 1969, is one of the goofiest, but most profound, anti-war novels of all time. It’s Kurt Vonnegut’s most well-known novel and usually the simple answer to the deceptively difficult question, “What is your favorite Vonnegut novel?”

To celebrate Kurt Vonnegut Day and since neither of us had read it in many moons, Rioter Amanda and I decided to re-read the tale of Billy Pilgrim and the Tralfamadore. Of course, we have ALL THE THOUGHTS. Here they are:

Greg Zimmerman: I’m only 20 pages in, and I already want a cigarette. Kidding. But I’d totally forgotten about the meta first chapter! Before we actually jump into the story itself, we get a semi-autobiographical (or, perhaps, totally-autobiographical) chapter on Vonnegut’s process leading up to writing the story. You know what my favorite part of this (other than the great first line: “All this happened, more or less) is? That DRUNK DIALING EXISTED in the ‘60s. Human nature is human nature, I suppose. Initial re-reading impressions on your end, Amanda?

Amanda Nelson: I’m with you on the meta-chapter. I didn’t think anything of it when I first read this in high school, but now I think it’s all part of Vonnegut’s avoidance of talking/thinking/writing about Dresden. He says that he didn’t really start the book until his children were grown — and even then he needs a whole chapter to ease into it. I wonder if any book before this one was so open about how hard it is for soldiers to go back to that place (you know, as opposed to glorifying the experience). I also wonder if this is the real, foundational reason the book has been banned so often — not cursing or sex, but honesty about a soldier’s mental state after war. It makes us uncomfortable. BUT THAT IS ENOUGH WONDERING FOR 10 PAGES. MOVING ON.

GZ: Censors — what a bunch “bitchy flibbertigibbets!” Am I right? And so now seems like a great time to talk about Vonnegut’s prose — which I think is best described as Hemingway minimalist, only if Hemingway were quite a bit quirkier and constantly winking at you from the page. At one point, Vonnegut describes his famous sci-fi novelist (alter ego?), Kilgore Trout, thusly: “Kilgore Trout’s unpopularity was deserved. His prose was frightful. Only his ideas were good.” If Vonnegut is describing himself there, and there’s at least a puncher’s chance that he is, it’s the best combined self-deprecation and humblebrag of all time! I love Vonnegut’s prose — it really is two-thirds of the fun of this novel. I mean, how can you not love sentences like this: “He made the inside of poor Billy’s skull echo with balderdash.” (Which, incidentally, is how certain politically posting Facebook friends make me feel, too.) Why hasn’t anyone built the “Kurt Vonnegut Insult Generator” yet? C’mon Internet!

AN: I think “bitchy flibbertigibbett” is the best name for a closed-minded annoyance of a person that I’ve ever encountered. Why are there so many “so it goes” tattoos and no “bitchy flibbertigibbet” tattoos? We’re doing it wrong. I also love the mental image that comes with this bit: “He didn’t look like a soldier at all. He looked like a filthy flamingo.” Something else that I can’t stop thinking about is how much I MISSED when I read this in high school. Back then, I thought it was a goofy and odd sci-fi doo-dad with a dash of rebellion (so, right up my alley). But now, ten years later, I’m catching all the humanism, Vonnegut’s comments on religion (Billy’s meek faith that the rest of the soldiers found “putrid”) — you know, the DEPTH. Good literature is wasted on the young ← I AM TOTALLY KIDDING THERE. What did you think of the book after your first reading?

GZ: That…is an excellent question. I read it the first time more than 10 years ago in college, but not for a college class — just for fun (read as: because I wanted to people think I was well-read and smart and “literary”). I’ve always operated under the assumption that I loved it — but as I thought about it before starting this re-read, I really had no idea if I actually loved it or loved the idea of me being the kind of reader who loved it. Now, though, more than halfway through a re-read, I’m pretty sure, yeah, I love it. You’re right, a lot of what Uncle Kurt is talking about here — everything from mental illness to the nature of time and the evils of war — belies the simplicity of the prose AND the story.

But, hey, so what’s up with all the owls and barking dogs?

AN: I…I don’t know! *sobs* I’ve actually just finished the book, and I have a few random thoughts bouncing around. Does Billy Pilgrim actually go into space, or is he hallucinating after having a breakdown and reading a bunch of Kilgore Trout’s novels while in the hospital (the books’ plots do resemble Billy’s travels, don’t they?)? How does Billy get off Tralfamadore? He doesn’t die there, so how does he get home, and does the woman in the zoo stay (if any of it is real)? Am I just being nit-picky here? And to be totally honest, the fatalism of “so it goes” (both the phrase and the, ya know, theme) started to grate on me after awhile. War is a glacier — you can’t fight it? Approaching moments in time can’t be changed, free will is an illusion? I just…those ideas make me antsy.

GZ: I think we’d need to bring in a Vonnegut scholar to answer all those! My own theory on the Tralfamadorians and time travel in general is….well, a couple things: 1) The time travel is a combination of what we call PTSD today and brain damage from the plane crash, and it’s not real (remember, “all this happened, more or less), and Billy Pilgrim read these ideas in the Kilgore Trout novels while he was in the veteran’s hospital after the war, and just adopted that as his own “experience,” and 2) The Tralfamadorian adventure is both a result of that, and also a way for Vonnegut to explore the notion that the only way that mass death that results from war can possibly make sense to our limited, stupid human brains (even though we perpetuate it wantonly, as we did in Dresden, and also Nagasaki and Hiroshima), is if no one ever really dies — if “All moments past, present, and future always have existed; always will exist,” which is how Billy Pilgrim explains the Tralfamadorian concept of death and time. Of course, that notion is preposterous on our plane of understanding, and therefore so is war. Buy that?

Even though there’s a lot to laugh at here, it is, at its essence, an anti-war novel. One of the most memorable and haunting parts of the novel is near the end, as the narrator is talking with his war buddy O’Hare about the fact that there is a net gain of 191,000 people per day, and by the year 2000, the world’s total population will be 7 billion. Then, he says, “I suppose they will all want dignity.”

If you disagree, I urge you to do so in Vonnegut-insult-style, i.e., “Go take a flying fuck at a rolling donut.”

AN: I don’t disagree, but I’ll say it anyway because the mental image is too good — go take a flying fuck at a rolling donut. Booyah! Anywoot, this is an anti-war novel, but it seems like such a hopeless one. The repetition of “so it goes” and the idea that events like massacres are unpreventable (or immovable) can easily lead to a “why bother trying” sort of attitude. I’m glad you brought up the line about dignity because that’s my favorite from the book — why don’t more people get THAT as a tattoo instead of “so it goes”?

GZ: I’ve also seen a fair number of “everything was beautiful, and nothing hurt” tats around the interwebs (never in person, honestly) – but you’re right, there seems to be a disproportionate amount of “so it goes” ink … it’s the “low-hanging fruit” of Vonnegutology.

I’m glad we did this re-read — this time, this book definitely resonated a bit more than when I was a pie-eyed college kid. For instance, I’ve added the following to my list of “Life’s Immutable Rules”: “Before you kill someone, make absolutely sure he isn’t well connected.” Always good to remember…