It wasn’t a galaxy far, far away…but it was kind of a worryingly long time ago now. The year was 1996, and I was twelve years old, and I was very confused and bothered by a Star Wars thing. This was the first time that Star Wars had ever bothered me, but to be fair, it wasn’t actually Star Wars’ fault.

1996 was a pretty remarkable time to be a rabid 12-year-old fan. The world of Star Wars had been kicking along pretty well, particularly for a bookish kid like me. We had already had a lot of excellent books, beginning with Timothy Zahn’s remarkable Thrawn trilogy (which literally caused me to become a writer) and proceeding on through a ton of various novels by lots of really good authors. But in 1996, a weird thing appeared. 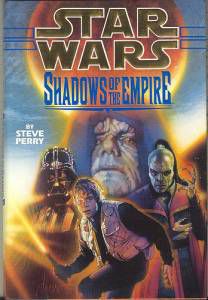 To this day, I find this cover exciting. Nostalgia, I suppose.

In 1996, I bought a book called Shadows of the Empire. It was a really good Star Wars novel, but even the book was unique in a couple of ways. For one thing, the artwork looked less “pasted over from screenshots of the films” than many of the covers had at the time. This one looked like a gorgeous original cover. For another thing, the book featured a slightly salacious scene in which a the bad guy tried to seduce Princess Leia and look I was twelve okay it was good stuff, leave me alone.

At any rate, it was an excellent book. It took place between The Empire Strikes Back and The Return of the Jedi, which was very cool and filled in a gap that none of my expanding collection of Star Wars novels had yet touched. It was also the first Star Wars novel I got to buy in hardcover, which was also a big deal for me back then.

I was very, very confused about how this could have happened, but look, books don’t get soundtracks and action figures and games and stuff. But I knew tons about Star Wars, I don’t see how I could’ve missed this. Beyond confused, I remember I was also thoroughly irritated at my parents for a little while too, because what the hell! Why hadn’t they taken me to see this thing yet!

It’s worth pointing out this was pre-internet for me. An information age had not yet penetrated my small, hyperactive brain yet.

Maybe some of you know about all this already, but perhaps some of you don’t, so let me walk you through the remarkable project that was Shadows of the Empire. It was a major Star Wars release, a “movie without a movie,” essentially, and a huge promotional thing which paved the way for 1997, which would see the release of the Star Wars Special Editions in theaters (a pilgrimage for me, to finally see Star Wars in theaters and get to pick out new additions) and eventually the upcoming Prequel films (also a pilgrimage, even if they were of dodgy quality. Look, I was the perfect age for this stuff).

How cool is all of this? Can you imagine if we had more of this? Now, I suppose the equivalent is the fact that so many books get turned into movies, which themselves come along with soundtracks, toys, and books. But imagine if we got more of this just for books? If we had more books that were “movie without movies” and we got the full array of accompanying releases to go along with, say, a new Neil Gaiman novel, a new Margaret Atwood book, a new Maggie Stiefvater novel or trilogy. Imagine if we had got all of that surrounding each Harry Potter novel, even before all the excellent movies had happened and supplied it, in their own way. Wouldn’t that be brilliant? A Harry Potter soundtrack based solely off a book and not the film?

Alas, it probably won’t happen. When doing a movie with a movie, you’re also doing a project without the movie profits, so it kind of helps to have the big pile of money that LucasArts was generally sitting on back then. But still. I can dream.