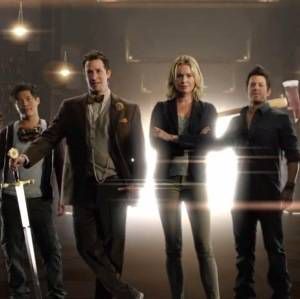 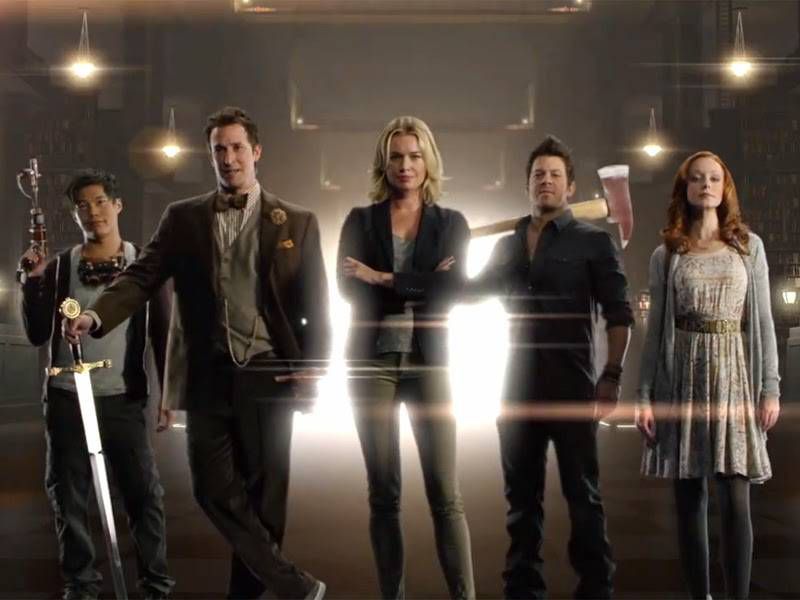 I know you saw the previews: Carter from ER (Noah Wyle) swashbuckling around in a respectable, knickerbockers fit, saving the world one adventure at a time, with a smugly intoned tagline: “I’m – the Librarian.” BLAM! POW! YES!!

I watched the two hour premiere of The Librarians (which is just two shows back to back – TV, you are not fooling anyone with this gimmick) and I laughed, I giggled, I swooned over the awesome dream library Carter calls home….wait, let me back up.

The basic premise is this: in this world, magic has gone awry sometime around the time of King Arthur, Camelot, and Excalibur. There are still streams of magic racing around, but it’s underground, and on the DL, and that’s why we can’t see that it exists. To keep everything in order, and to battle the (weekly, cuz it’s a TV show) bad-magic uprisings, there are the Librarians, a necessarily know-it-all group called forth, one at a time, with a Watch-sorry, Guardian (hello, Buffy and Giles!) to protect the chosen one as they go about their evil-fighting business. Carter doesn’t think he needs a Guardian – since he’s got a photographic memory and has read ALL THE BOOKS, he can pretty much get his way in and out of any crazy situation. Example: counting how many bullets the bad guy just fired and then knowing, by the make/model of his gun, that he is out of ammo and therefore can easily be taken down. Oh, and did I mention he has a sidekick/trainer in the form of the Excalibur sword, magically enabled to fight on its own, with a Data/Lore emotion chip added in, and inhabiting the (invisible) form of a puppy dog? Yeah. It’s kind of cool.

So Carter the Librarian thinks he’s just peachy – until Rebecca Romijn shows up as a counter-terrorist officer on a leave of absence, and gets a secret white envelope from the Library itself, inviting her back to headquarters to officially sign up as his Guardian. He throws a fit and fights it for about five seconds, but by the end of the two hours it’s all true wuv and magical kissing and everyone’s happy.

But this is the best part: the actual physical library space, the Librarians’ Batcave, is a book lover’s fantasy. An endless maze of wood-paneled stacks, lined with all the best books, and safeguarding magical artifacts the Librarians have saved over the years. Like all the Camelot stuff, the Ark of the Covenant, Noah’s Ark, Pandora’s Box, in the Library to keep it all from falling into the wrong hands. Which it does, naturally, and then Carter has to go and activate some of the other Potentials (and no, sadly he doesn’t meet up with Morpheus in that ramshackle apartment building and have cookies with the Oracle [yet]). The potentials are: an all-five-senses enabled photographic memory gal who gets some orgasmic sensory hallucinations as part of her extra sensitive memory deal; a badass oil rig cowboy with a stellar IQ; an Auzzie pickpocket/heist mastermind who can steal anything; and their Guardian, the aforementioned Romijn, armed and dangerous. And at some point, there will be dragons.

Bottom line is this: the show is an excellent mashup of other history, mythology, adventure and sci-fi books, shows, movies, and Star Trek plot lines, and I thoroughly enjoyed watching it. With literary in-jokes and characters named after their ‘thing’ – Cassandra, the one who sees the truth, Lamia with an actual snake tattooed on her arm – and books referenced literally around every turn, it’s a lot of fun. And as a Librarian in Training myself, I loved seeing Librarians getting game and something cool to do besides look sexy and shush patrons. (To be fair, our Librarians do both, but also a lot more.) At the end of episode 1, the Library, to save itself from evil, folds up and winks out of our universe (cannot wait to see evil Carter in the Alt-verse, maybe run into old Ben on that island), and so Carter permanently enlists the Potentials to fight the good fights, while he goes off in search of the Library, and all its cool stuff.

And here comes my only gripe: white folks don’t control all of the information, TV, and I would appreciate it if you would kindly throw some color in there. Aside from the Asian/Aussie criminal guy. Oh, and the sexy black British woman bad guy. With a wealth of reference information at their fingertips and a world of evil to fight, The Librarians should know better than that. Librarians are a diverse group of people. If this is truly a neverending story of good vs evil, I hope one day we’ll get to meet the international counterparts to the U.S. Librarians, every bit as intelligent, resourceful, kick ass and attractive as our guys, just working in a different part of the world.

After all – I’m (almost) a Librarian too.