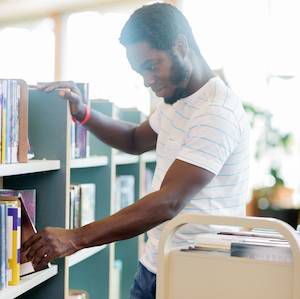 As a future librarian, the best book I’ve read – the most intimidating, inspiring and just plain interesting – is also the one with the worst title: This Book is Overdue! But, get it? Marilyn Jackson’s title is just a play on the stereotypical librarian, shushing patrons and and glaring evilly from behind the circulation desk, all while sucking us dry of spare change for those late books, like Blockbuster.

It’s a joke, because, especially these days, the public-library-librarian is just the tip of the iceberg. There’s a masters degree you need to practice this art, and it’s got a big name: Library and Information Science. (LIS, FYI.) Because yes, the library is still a huge part of what librarians do. But so is the science of building easily searched databases (and loading information into them), getting information to the masses via various social medias, creating second life worlds ripe for literary exploration (like the Deadwood virtual library, taking you back to the town in it’s infamous heyday, where you can perform period-centric research), and of course collecting, reviewing, and just all-round book lovin’. The subtitle of the book is How Librarians and Cybrarians Can Save Us All. The point of the book is that librarians can do just about anything.

Like Kathy Shaughnessy from St. John’s University in New York, who was in Rome with a group of librarians to teach computer literacy, and, in the process, enroll a bunch of international students into a new, very specialized, online LIS program: Global Development & Social Justice. The group’s modest goal? First: teach the students to use computers (this is your browser, etc.); so they could return home to the Congo, the Philippines, Mexico, the United States, and get the online degree; then proceed to help their home communities and promote social justice. Librarian missionaries.

Or like censorship fighter Judith Krug, who you might recognize from her biggest creation, Banned Books Week.

Or The Connecticut Four, who challenged the FBI & the Patriot Act, refused to hand over their libraries’ computer records, and sued the government – all to protect their patrons.

Of course, the book also chronicles the rise of the Online and Street Librarians, pounding pavements with mobile phones & tablets, using wikis and Tweeting out relevant information. They might help people at conventions and other gatherings navigate strange cities and find food, public restrooms, aid, schedules, transit, street closings, be forewarned of police action – just the basics.

Jackson even provides a bit of practical advice through anecdotes about rouge turds (!!) in public libraries, and how to deal with them. In case you need to know.

And don’t forget the ALA book-cart drill teams!

To sum: if you’re interested in becoming a librarian, curious about all the stuff librarians do, or just want to read a great book, try this one out.

And then come back to Book Riot, where I’ll be calling out more Cool Stuff Librarians Do, just for you.