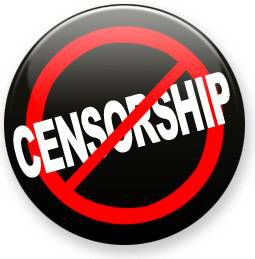 Last week, a fellow Rioter wrote a thought-provoking piece about why she couldn’t finish a reread of classic Gone With the Wind, even though it had been one of her favorite romances when she was younger. The post centers around the question of what you do as a reader when your former favorite reads no longer hold up to your adult ethical standards.

But it seems what many took away from this post was that it argued for censoring books like Gone With the Wind.

Since when is critically assessing what one reads censorship? And when can we fairly point to something — anything — and claim it’s an act of censorship? Perhaps it’s time we look at what censorship really means.

Censorship is the act of suppressing speech, books, movies, and so forth, which may be considered “inappropriate” or “unacceptable” or “controversial.” It’s when one person or group of people or organization decides that something isn’t okay for others to consume and takes active steps to make that material inaccessible for other people.

Criticism, on the other hand, is an evaluation, examination, and judgment on the strengths and weaknesses within an artistic work.

It’s reasonable to assert that criticism may be a first step toward censorship. But censorship veers from criticism because it changes from intellectual evaluation to physical action. No longer are we discussing the book; instead, passages are blacked out, pages ripped out, or entire books are pulled from shelves.

When a book is challenged or banned from a school, that’s practicing censorship.

Censorship is an act of power. It’s a means of saying that their individual or collective criticism of the book is the criticism of the book — it’s the only evaluation and judgment that matters because it’s the only one that exists. And because they have deemed the material inappropriate, they have asserted their power by actively removing the book from other reader’s hands. They have censored the material, and they have chosen to disallow other readers from criticizing the work for themselves.

Censorship is an act of privilege. Aside from placing one person or group’s critical assessment as THE right assessment, censorship literally prevents other people from accessing the material in order to form their own opinion. Sure, maybe readers who want the book that’s been challenged or banned can get it from a library in another town or maybe they can order it from the internet — but those are maybes. There are plenty of readers who, due to no fault of their own, have no means of accessing that material. The option is taken from them.

Those who believe having their book censored would be “awesome,” for whatever reason, exercise their privilege, too, assuming that the publicity they’d garner somehow wouldn’t mean their book was unavailable for many who would like to have access to it.

Criticism doesn’t equal censorship. Instead, criticism advances discussions that work to dissuade censorship. Criticism opens up dialog about tough topics, rather than shuts them down altogether. Criticism encourages thinking.

I’ve read and reread the post about Gone With the Wind, and I’m trying to dig out where Kit calls for people to censor this book. In fact, I’m having a hard time finding where she’s even suggested that as readers, we need to look more critically at books like this and discuss their hugely problematic elements. Her post is a discussion of why this particular book felt much more problematic to her as an adult than it did when she was a younger reader. It’s a critical examination of her own ethical beliefs in context of the book that once was a favorite romantic read.

It’s about a reader coming to understand herself.

That’s precisely what good criticism does — it forces you to examine yourself and your own thoughts and experiences. It begs you to engage and assess, rather than blindly accept or willfully suppress what you’ve been told or led to believe.