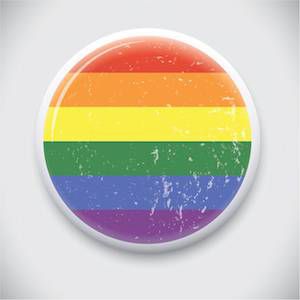 Today may be the day my negative feelings about the phrase “just happens to be gay” expanded beyond pet peeve level & into something bigger.

You can read the whole conversation here. And read this followup interview with Talley over on Gay YA. “Just happens to be gay” is a common phrase, particularly in descriptions of book characters. (Book reviewers and book bloggers are especially prone to use it, which is why I think it’s important we have this conversation here at Book Riot.) It’s a phrase I hear a lot. And it’s a phrase that really frustrates me. I know what it’s supposed to mean: that the character has other dimensions and, especially, that the plot of the book doesn’t revolve around the character’s sexuality. And it’s origins are, I suspect, relatively progressive. But as Talley and those who responded to her tweet point out, that’s not what many of us queer people hear when we see that phrase in action:

@robin_talley I could swear it’s code for “I’d like to be able to ignore all the ways it forms an identity, especially the hard parts.” — Dahlia Adler (@MissDahlELama) April 3, 2015

@robin_talley “I want more people to offhandedly reference someone of their gender being cute but never actually get any!” — Dahlia Adler (@MissDahlELama) April 3, 2015

@MissDahlELama But there are also ppl who mean “I’m OK with LGBT people as long as they aren’t in your face about the, you know, sex stuff.”

Basically, “just happens to be gay” isn’t working, at least for enough of us to make it a problem that needs figuring out.

Below I’ve discussed a few reasons why, and I’ve started trying to figure out a better way to talk about queer characters. These are just preliminary thoughts, a stab at thinking through why “just happens to be gay” has failed us. Please note: None of this means that if you use the phrase, you’re an evil monster. But it is meant to prompt us to think and talk about how the phrases we use feel to a wide variety of people. Talley started a really important conversation, and I think we need to keep having it.

There’s also a way in which it can dismiss, even erase, queer readers. The phrase works to assure straight readers that they’ll still be able to identify with the character, even though s/he’s queer. But where does that leave readers who aren’t straight?

Queerness isn’t a minor characteristic. Being queer isn’t like having green eyes or being mildly allergic to strawberries. Growing up queer has an enormous impact on who you are, because—despite Honey Maid coming out against Indiana’s RFRA, despite the popularity of slash fanfiction, despite Modern Family and the shifting tide on marriage equality—it’s still often damn hard to do. But a lot of people don’t seem to want to hear that. As Talley put it:

@MissDahlELama I think some also want to pretend there are no problems associated with being LGBT anymore, & find discussion of such boring.

And “just happens to be gay” can signal just that: that this book doesn’t deal with the difficult, icky, everyday stuff of being queer in a world where it’s still not A-okay. Which means, really, that it often doesn’t deal with queer characters at all but rather with characters onto whom queerness has been placed like a jaunty cap or a cute belt. It’s an accessory, not deeply set and so easily removed or ignored. And there’s this, too:

.@mielsnickety @robin_talley @MissDahlELama it can also be really dumb:”a charming romance in which the hero just happens to be a wizard” — Alexander London (@ca_london) April 3, 2015

It’s outdated. Part of my response to “just happens to be gay” comes from the fact that it just feels so dated, like talking about your gay uncle’s “roommate.” It’s saying “gay people can be chefs and boxers and morticians without every part of their life being about having sex with other gay people.” Which doesn’t exactly advance the conversation. Basically, while being queer isn’t easy, the old-fashioned work of “just happens to be gay” seems to have outlived its usefulness. It was once progressive and open, in other words, but I don’t think it really is anymore.

(Yes, this and the previous section are in tension with each other. But that’s okay. We contain multitudes.)

We need more stories, not fewer. “Just happens to be” does a lot to separate the story being described from those other (inferior? less enjoyable?) books where a character’s queerness is front and center.

But that doesn’t mean—and this is a suggestion embedded, at times, in the dark corners of “just happens to be gay”—that there should be fewer stories about that boring stuff that only queer people care about and more stories where queerness is sufficiently present to make the reader feel comfortably liberal without pushing it too far. And that’s definitely not enough. As author Justina Ireland put it in the converastion with Talley:

@robin_talley The “just happens to be” phrase is diversity without the messiness of diversity. I always eyebrow raise when I read it.

The world is messy, and it’s going to take a lot of storytelling (not less!) to come even close to capturing it.

So what’s the answer? How do we talk about queer characters in richer, less dismissive ways? I’m not sure. It’s hard. Which is why the conversation that Talley started is so important.

But I’m pretty certain that’s not the only way to solve the “just happens to be” problem. So let’s keep talking about it, keep seeking out a variety of useful, effective, affirming ways to talk about books with diverse characters.