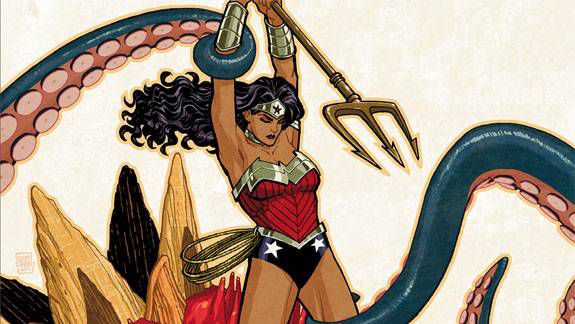 This week probably involves complicated travel plans, loud family members, and a very large amount of turkey and football for you (if you’re in the U.S. anyway). But Charlie Brown and my fourth grade teacher Sister Estelle taught me that Thanksgiving is a time to reflect on all the things, big and small, that make you happy in life. Comics make me very happy. So I thought I’d give a special shout out to those books that, if they were people, I would hug and say, “I luuuurve you!”

#5 Wonder Woman
Forget everything you think you know about a superhero comics. Because Wonder Woman is nothing like anything you would expect from the genre, and that’s what makes it a spectacular series. While he is sort of telling an origin story for the Amazon princess, Brian Azzarello is really doing a fantastic crime family drama with the Greek gods. Cliff Chiang’s modernized character designs for the entire pantheon, on top of the his stellar visual storytelling, are some of the most striking art I’ve seen. And the colors in this book, courtesy of Matt Wilson, make everything jaw-droppingly gorgeous. It’s unlike any other superhero comic on the rack.

The Stack Newsletter
Sign up to The Stack to receive Book Riot Comic's best posts, picked for you.
Thank you for signing up! Keep an eye on your inbox.
By signing up you agree to our terms of use
#4 Cow Boy: A Boy and His Horse
What I love about Nate Cosby and Chris Eliopoulos’ Cow Boy is that not only is it a fantastic comic for kids but it doesn’t talk down to them. This graphic novel follows the adventures of Boyd Linny, a 10-year-old bounty hunter in the Old West. Boyd’s a rich, complex character that just breaks your heart with his cold determination and moral righteousness. There’s also plenty of tusslin’ and humor to keep what’s a heavy story enjoyable and fun. It’s great for kids and grown-ups alike, and there aren’t nearly enough comics out there like that. 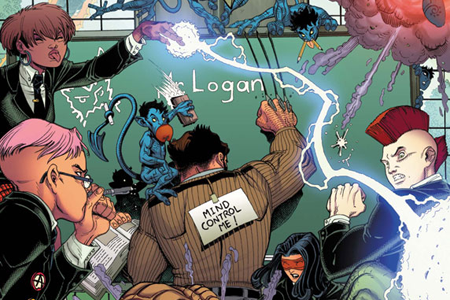 #3 Wolverine and the X-Men
The X-Men books are the greatest, longest-running soap opera in comics. While that is the main reason I love them to pieces, it also makes them inaccessible and a little bit intimidating to new readers. Wolverine and the X-Men does the near impossible: it stays rooted in the nearly 50 years of continuity and melodrama but stays simple and accessible enough for casual or new readers. If you liked the X-Men movies, or grew-up watching Fox’s X-Men cartoon in the 90s, this is a great comic for you. Full of old and new characters, Wolverine and the X-Men sees a new crop of students at the recently founded Jean Grey School for Higher Learning in West Chester, NY. It’s full of high school drama, action, adventure, and kissy faces!!

#2 Hawkeye
This comic is so freaking cool. It’s like the Ferris Bueller of comics. You feel cooler just being near it. You may remember Hawkeye as the dude with the bow and arrow from The Avengers. More than any Marvel comic since the movie came out, this is the book I feel most comfortable giving to people who liked the movie. Matt Fraction is great with snappy, witty dialog, and his take on the titular character is a guy just trying to get though the day in a world full of super-powered villains and neighborhood thugs. The book feels very Whedon-esque. Most importantly though, the art by David Aja, Matt Hollingsworth, and Chris Eliopoulos is brilliant and unique. It’s the kind of visual storytelling that’s only found in comics. 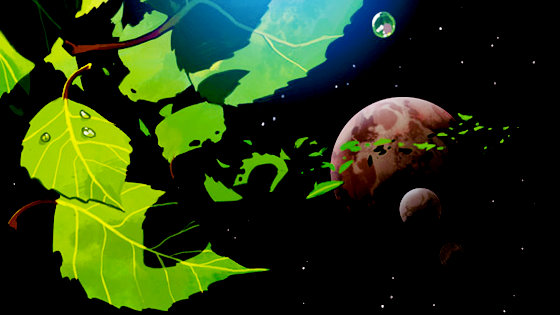 #1 Saga
I’ve said this before, but it’s not even fair how good this book is. Brian K. Vaughan’s writing is just so consistently fantastic. You’d think the series would have hit a plateau by now, but it really hasn’t. Fiona Staples’ art is… I can’t even, it’s that amazing. I want her to draw everything. Everything! There’s a lot of really weird stuff that she has to draw in this comic (like aliens, cybernetic monarchs, and spaceship trees) but she makes it all look so organic and natural. Staples makes this insanely cosmic story feel real and grounded. Like all truly great science fiction, Saga uses fantastical elements to tell a relatable story about love and family. And I can’t get enough of it!