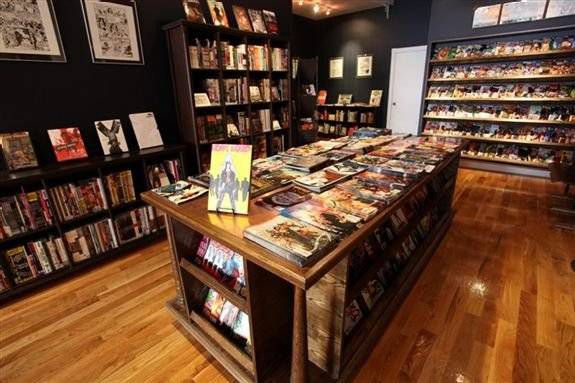 Getting your hands on issues of comics can be a bit tricky sometimes. Unlike in the 80s, when you could find comics on spinner racks in convenience stores, stationery shops, local toy stores, pretty much anywhere, nowadays the local comic shop is the only place to get physical new issues on a weekly basis (digital comics is a whole other thing that we’ll get to eventually).

This has to do with how comics are distributed and the structure of the direct market. Basically, all comic book issues are distributed by one company. Everything has to be ordered at least a month in advance of its ship date by a local shop, and nothing can be returned. It’s an imperfect process that causes more headaches than it needs to and hinders comics getting to new audiences.

I didn’t know any of that the first time I walked into a comic book shop. In fact, I didn’t really know anything about comics when I walked into Jay and Silent Bob’s Secret Stash in Red Bank, NJ. But I wanted to. 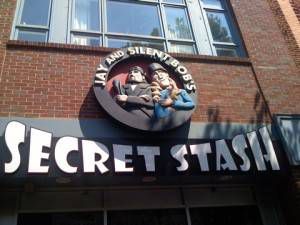 Bright-eyed and bushy-tailed, waiting to have all the secrets of comics unlocked for me, I stopped by the Secret Stash one early summer morning on my way down to the Shore. I went straight to the wall of new issues. I was overwhelmed and a bit intimidated by everything in front of me. But I was immensely curious and eager. I stood in front of the wall, clearly waiting for someone to come help decipher what was in front of me. I cleared my throat and attempted several times to make eye contact with the guy behind the counter. And nothing.

The thing about the Secret Stash is, aside from being a regular comic shop, it’s owned by Kevin Smith. There are some props and stuff from his movies in the store, so I’m sure there are a lot of people who just come in to look around and then leave. So I figured the clerk just assumed I wasn’t in there with a real purpose. I browsed around the back issues bins and shorter bookshelves of what I now know were trade paperbacks. I picked up a copy of Wonder Woman: The Complete History and headed up to the counter. This is what happened:

It was five years before I walked into a comic shop again.

I’m being a Negative Nelly. Obviously, not every shop is like this, and not every first experience buying comics is like this. There are tons of excellent local comic shops out there. And when I finally dove into buying comics on a weekly basis, it’s because the good shops were so very good.

Midtown Comics in Manhattan was my first regular shop. I was super nervous, walking up the narrow staircase the first time I went into the Times Square branch, but that feeling was quickly dispelled once I walked in to the store. Midtown is the Barnes and Noble of comic shops: they’re big and bright with polite, knowledgeable staff and tons of comics in stock. They have three locations in the city; all have a similar layout and are quite welcoming. And they have pretty much everything you could ever want right there in the store.

Midtown made buying my comics simple and convenient. It was easy to slip into the Wednesday ritual with them. I went to the same register each week and am still friendly with a few of the guys who work there. But when I moved to Brooklyn, I needed to find another local shop. And that’s when Bergen Street Comics came into my life. 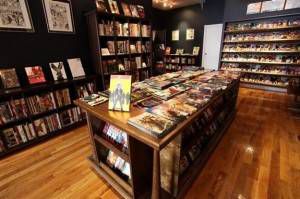 Bergen Street is pretty much the greatest local comic shop ever. Think of your favorite indie bookstore. Now fill it with comics and graphic novels. That’s Bergen Street. There are no statues or Magic cards or collectibles. No back issue bins, and the exposed-brick walls are decorated with original comic book art usually from the most recent event hosted by the shop.

Mostly importantly, Bergen Street makes comics accessible, and very cool. Their collection is amazingly well curated. They have everything to please the weekly capes-and-tights crowd, as well as the best underground indie comics and the latest translated works from Europe. Whether it’s Amazing Spider-Man, Asterix, or Asterios Polyp, Bergen Street has it.

The staff is small but extremely knowledgeable and friendly. They are all brilliant with recommendations, a service I often utilize. After a very long day (and week) at work, I walked into the shop and asked for a comic that would be good to get drunk with. They’re that good.

Bergen Street is also closely tied into the local comics scene, hosting launch parties for small creator-owned comics as well as big name series. They crowd is always fun, with plenty of free bubbly to go around. Ain’t no party like a Bergen Street party.

I look forward to walking into that shop each and every week. And I adore bring people in there, especially folks who don’t read comics. Bergen Street is unparalleled in the way they present their product, and they’re dedicated to finding the perfect comic for each customer who walks through their door. Regardless of what they sell, Bergen Street is a fantastic shop. And that makes them fantastic for comics. They’re the local comic book shop I wish everyone had.