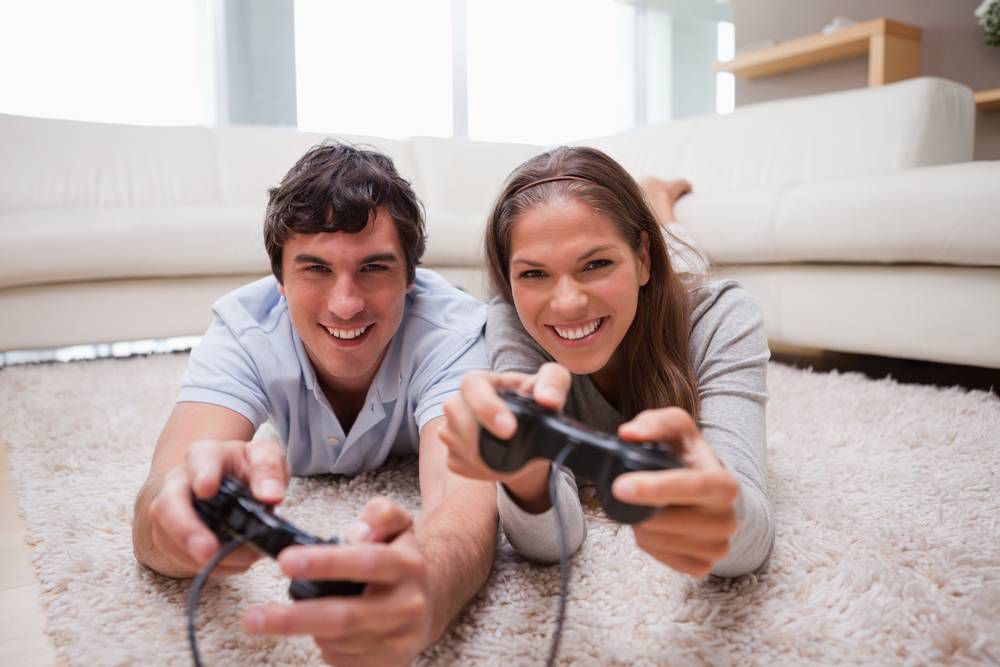 If your head’s spinning, don’t worry, the comics about gaming collected here are much simpler. They’re simply comics that critique, lampoon, and celebrate the nuttiness of gaming and gaming culture. 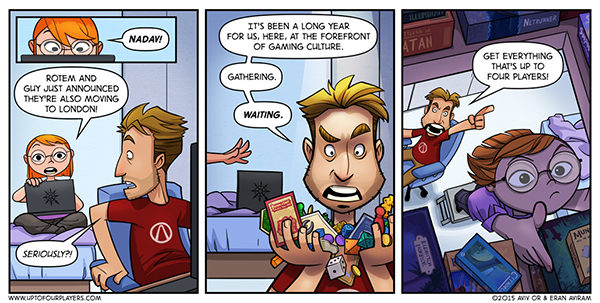 Up To Four Players by Aviv Or and Eran Aviram

Originally a gag-a-day webcomic about two Israeli couples living in London and playing board games, Up To Four has recently shifted to a new long-form story arc as the main characters start out on an epic tabletop RPG. Regardless of where you start, it’s guaranteed to give you a good chuckle and make your fingers itch to roll some dice of your own. 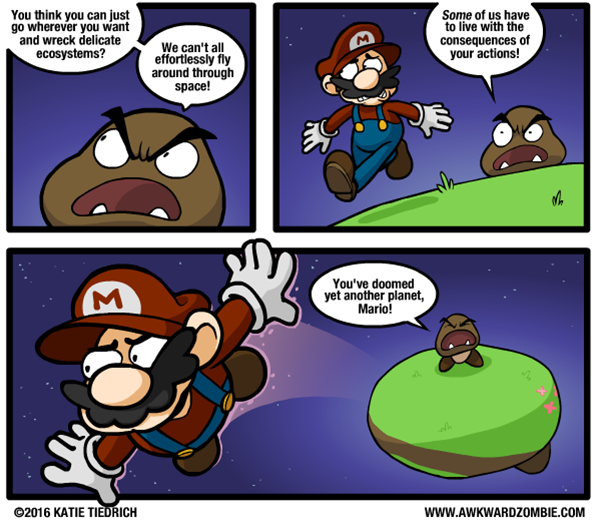 A personal favorite of mine, Awkward Zombie cheerfully pokes fun at the most nonsensical and ridiculous elements of all your favorite video games. The archive even has each strip tagged by game, so you can go through and read about all your favorites, though I find you don’t even need to be familiar with the games to enjoy the comics. (Even if I ever do play a Metal Gear Solid game I’m not going to be able to take Snake seriously after this comic.) 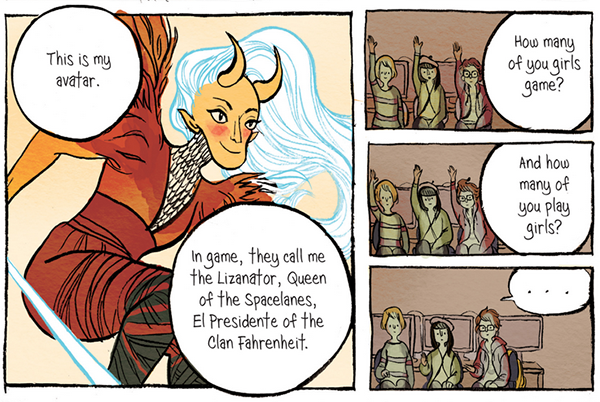 Illustrating the digital interactions of people online in an interesting fashion is no easy task, but Jen Wang does it beautifully in this story of one gamer girl trying to find her place in the world, and maybe fix the world a little bit at the same time.

Sequential Art and How To Play by Phillip M. Jackson

Sequential Art strictly isn’t about video games; it’s a slice-of-life webcomic about an eclectic group of roommates and the crazy adventures that befall them. And if those adventures sometimes seem like they’re straight out of, say, Tomb Raider or Portal, that’s just coincidence, right? If you’re looking for something a little more gaming-specific, Jackson also does a series of single-page video game reviews called How to Play (though it hasn’t been updated in quite a while). 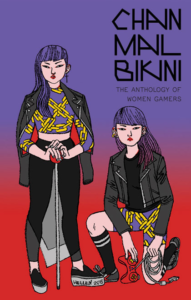 The gaming world can be a harsh place for women, but it can also be a place of sanctuary or inspiration as well. This terrific anthology collects short original comics by 40 women and nonbinary artists who tell stories, many of them autobiographical, about how gaming (from tabletop RPGs to LARPing to MMOs) has shaped their identities and helped them find their place in the world. A solid recommendation for anyone who’s found a home in games.

I see these video game comics from Dorkly pop up on Tumblr every so often, and they always make me grin; imagine my delight when I discovered they were all by the same woman, and that I could browse through them all in one place! From Pokemon Go misadventures to Skyrim glitches, Lepetit continually nails just how ridiculous video gamers can be about their favorite games. 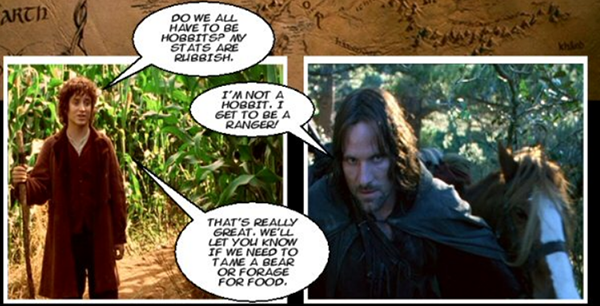 For the tabletop enthusiasts out there who enjoy poking the occasional fun at Tolkein (or, more specifically, Peter Jackson), DM of the Rings is a screencap-based webcomic based upon the very simple premise that while The Lord of the Rings might be a quintessential classic of high fantasy literature, it really makes for a pretty terrible Dungeons & Dragons campaign. I mean, halfling — er, hobbit — starting stats really are pretty rubbish. 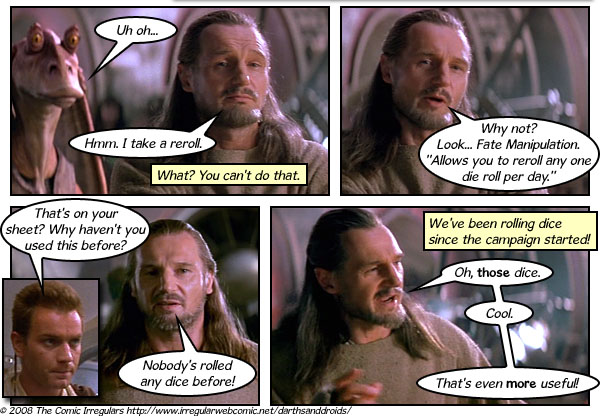 Directly inspired by DM of the Rings, the minds behind Darths & Droids took the same premise and applied it to Star Wars instead, proving that The Phantom Menace makes for… well, actually, not that bad of a D&D campaign (or at least, some might argue, better than the source material!). They’ve worked their way the entire series and are on the climax of Return of the Jedi by this point, although their FAQ indicates they plan to tackle Rogue One and possibly some of the other tie-ins before moving on to the new trilogy-in-progress. 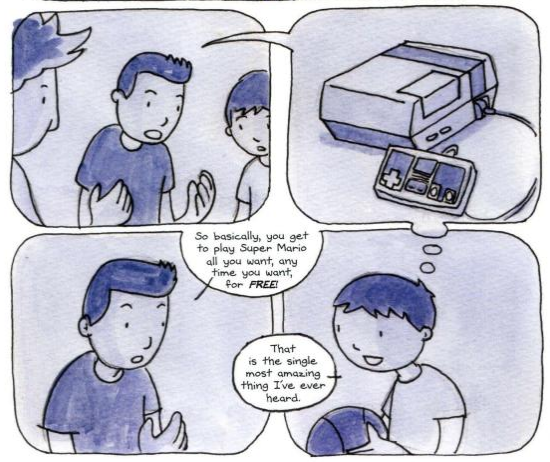 Level Up by Gene Luen Yang, art by Thien Pham

Although it starts out as a nostalgic story of a boy falling in love with arcade games, trust Gene Luen Yang to tell a much deeper and darker story. Classic video games from Pacman to Nintendo provide a much-needed sense of purpose and escape for Dennis Ouyang, but they also seem to lead to something much darker in this tale of grief, family, and growing up. 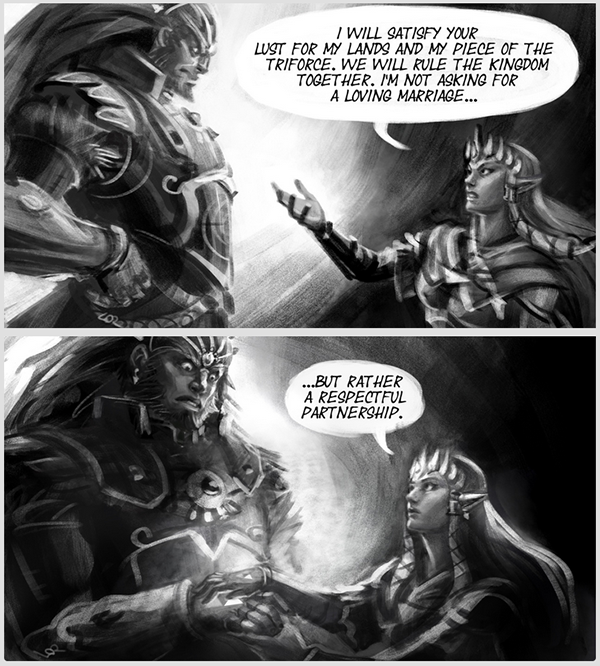 A Tale of Two Rulers by Lorraine (@figmentforms)

Okay, I’m breaking my own theme here, as this is technically a webcomic based on video games rather than about them. But it’s just so good I had to include it. In this fresh take on the Legend of Zelda series, Princess Zelda seeks to break the cycle of vengeance played out again and again in her kingdom… by offering to marry King Ganondorf. Politics, history, duty, and culture all come into play in this fascinating re-imagining of Hyrule, gorgeously illustrated in dramatic black-and-white panels that still manage to evoke evoke the style and imagery of the original games.

What are your favorite comics about gaming life and culture?