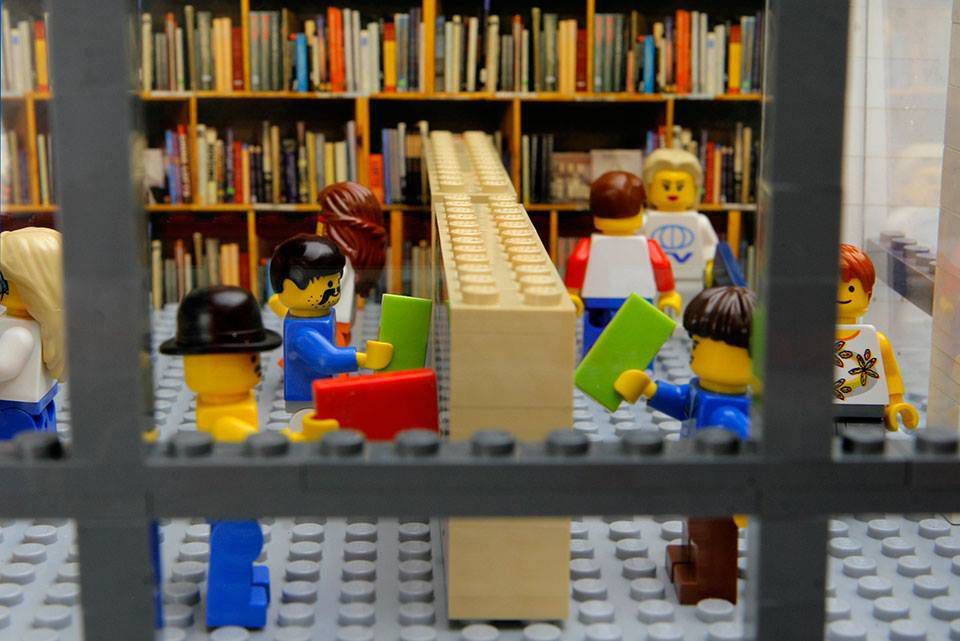 Here’s a roundup of some of the coolest Lego libraries and bookstores from around the bookternet.

Before showing off the actual, based-on-real-life libraries and bookstores that have had their likenesses modeled in Lego form, let’s look at an entirely made-up Lego library.

Remember Joe Hardenbrook — Mr. Library Dude — who brought us these awesome mini-fig librarians? He took his idea a little further to offer up a fictitious Lego Library: 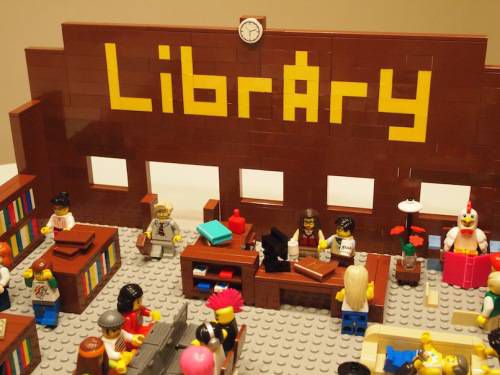 In order to put his Lego Librarians to work, he had to develop the library. It’s complete with not only books, but a computer lab, a story time area (check out the librarian giving story time in a full-blown chicken suit), an intoxicated patron lying on library furniture, and more. 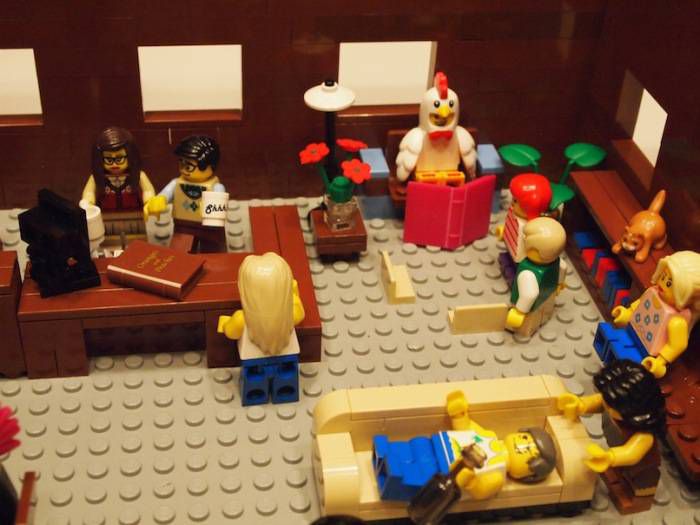 Joe’s library is by far one of the most accurate depictions of a public library I’ve seen, Lego or otherwise. 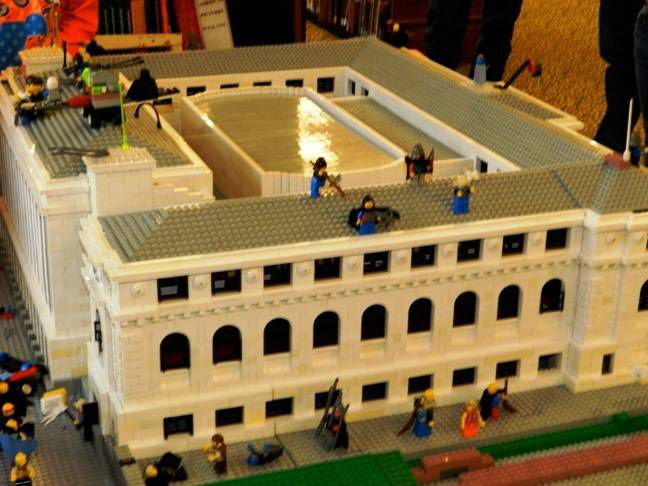 To celebrate the 100th anniversary of St. Louis Public Library’s Central Library, the Gateway Lego Users Group built an impressive replica of the building out of 20,000 blocks. It took them 130 hours. A few additional photos of their creation can be seen here. 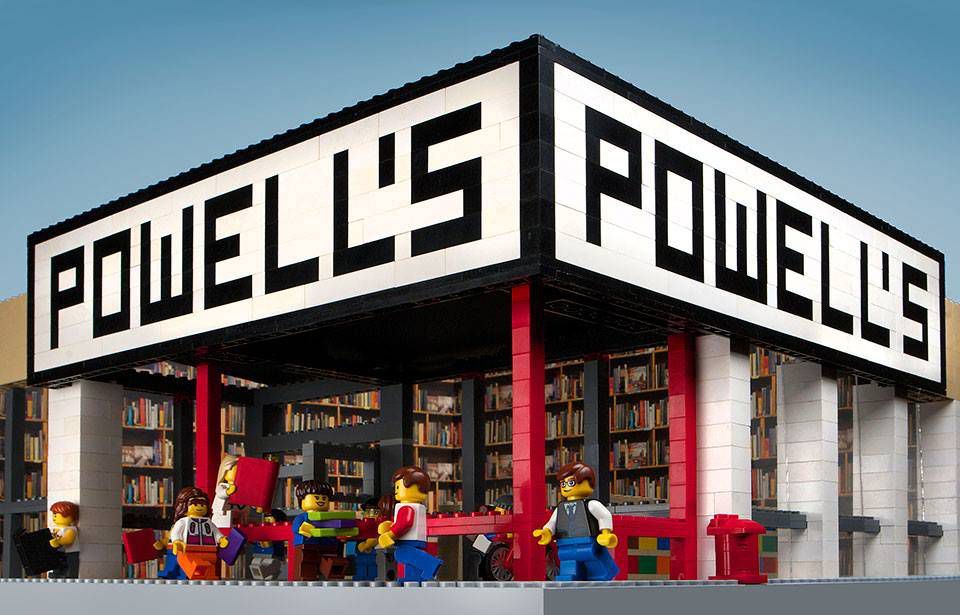 The legendary bookstore Powell’s created their own Lego store to celebrate a sale on their Lego books. Check out the inside: 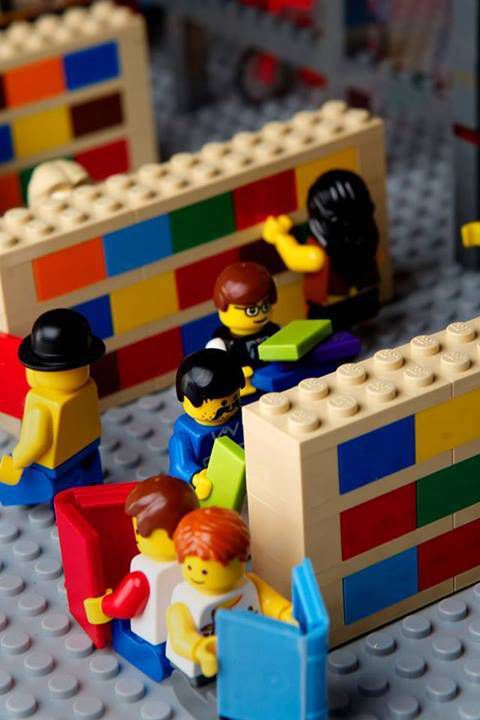 There are so many happy readers inside this Lego store. You can find out a little more about the model and who helped the Powell’s team build it on their Facebook page (along with some more photos). 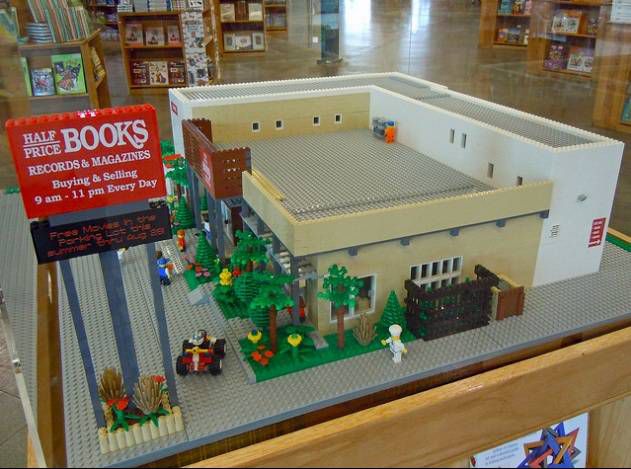 Via Flickr user Jeff Stvan, here’s a Lego model of the Half Price Bookstore in Northwest Dallas, Texas. Even though we can’t see what’s going on inside the store, the details on the outside are fantastic: check out the marquee with the events listed, as well as the air conditioner repair person on the roof.

Let’s take a quick trip to Europe, shall we? More specifically, let’s go to Sweden. 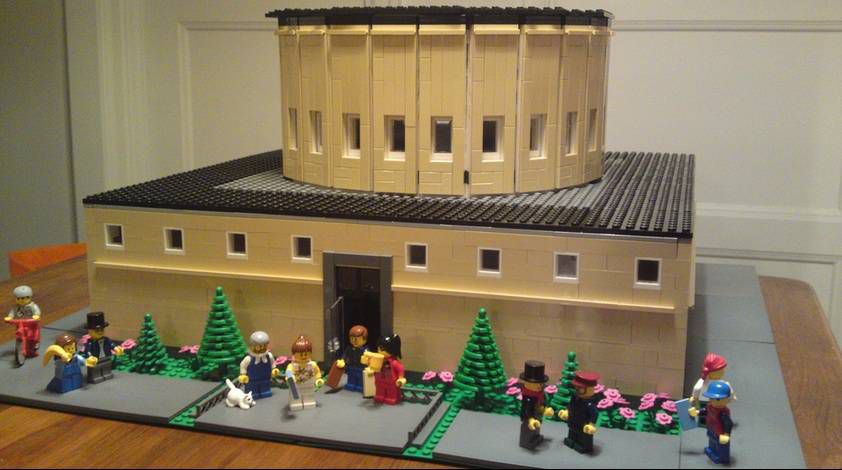 Check out Flickr user minkowsky‘s model of the Stockholm Public Library, complete with a man who brought his cat along.

A peek inside the Stockholm Public Library in Lego reveals setup of rounded book cases along the inside of the library, as well as a busy browsing collection that appears to be pretty well used. 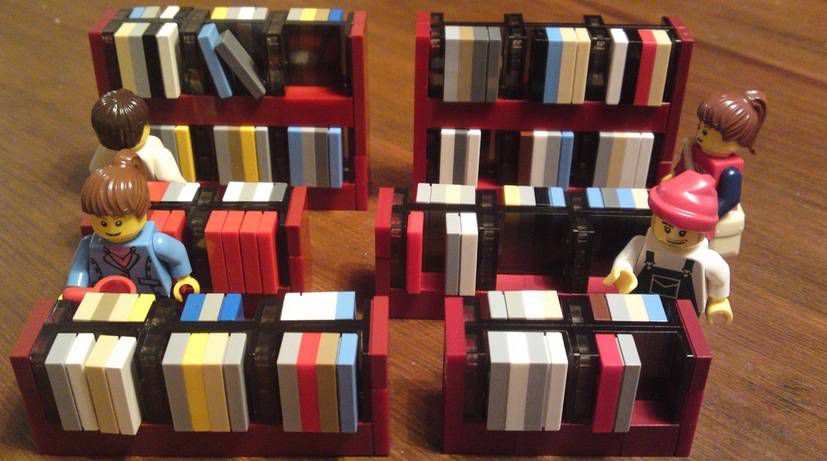 Name that central library! If your guess is Detroit Public Library, you’d be right. This creation, by Jim Garrett, was created as part of a series of Detroit buildings. 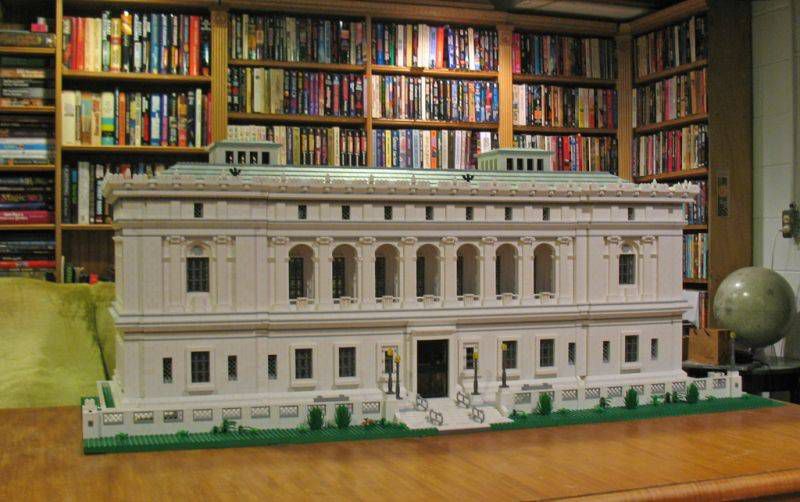 Stratford Public Library in Canada saw its likeness in Legos, which was assembled by one of their own staff members as a way to honor a retiring CEO. 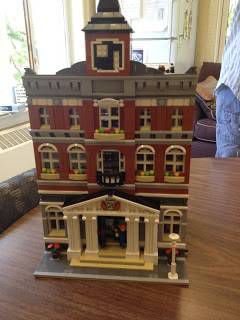 Inside the Stratford Public Library, it looks like there’s story time going on, as well as a nap in the back offices by one of the staff members. 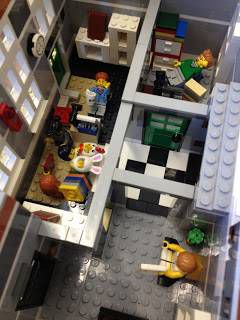 This impressive Lego rendition of the Denver Public Library was put together by Imagine Rigney of the Imagine Build Zone as part of the Colorado Governor’s Mansion Holiday Tour in 2010. 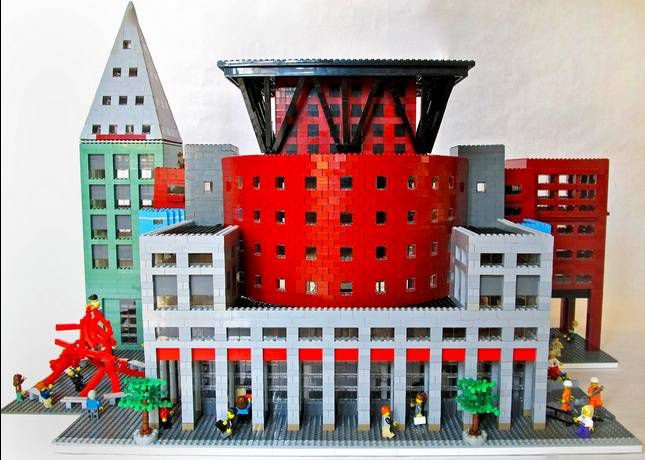 The entire library and all of the different architectural features (and its impressive size!) can be seen in this Flickr set, but perhaps this is my favorite part of the scene: 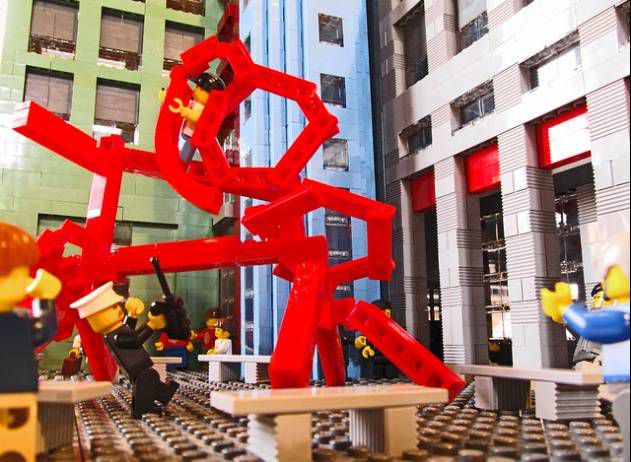 There is a hooligan hanging out in the public art sculpture on the library grounds — and security is doing his best to get the guy down. 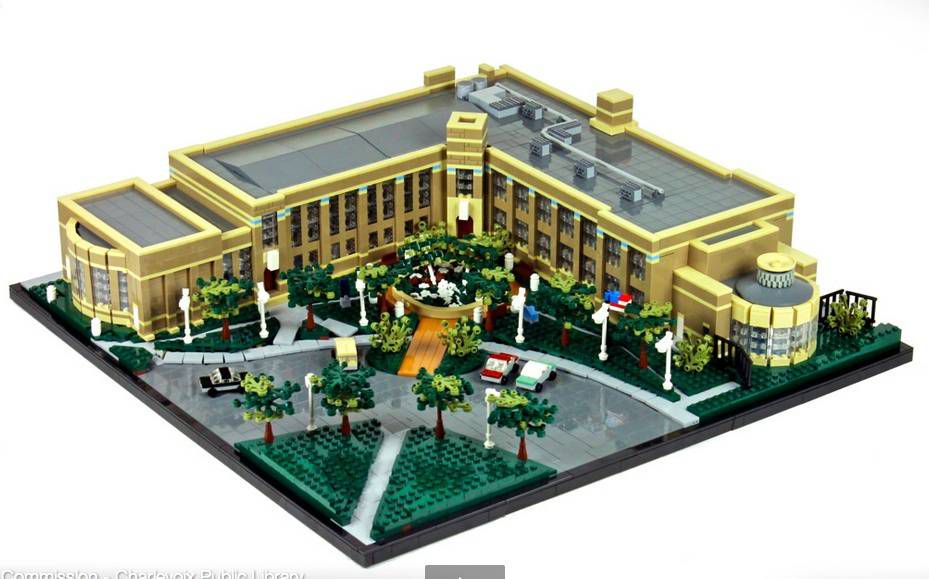 This is an overview of the Lego-fied version of Charlevoix Public Library in Charlevoix, Michigan, finished earlier this year. It was a commissioned project built by Paul Vermeesh, who explains on his Flickr site that it took over 5,000 bricks and one and a half months to build. He worked from the library’s actual blueprints and added his own twists. The Lego library permanently resides at the library for all to enjoy.

Although we never get to see the inside of the library, the outside is spectacular: 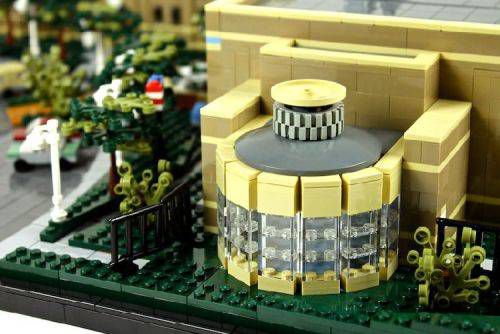 That’s the children’s wing of the library. 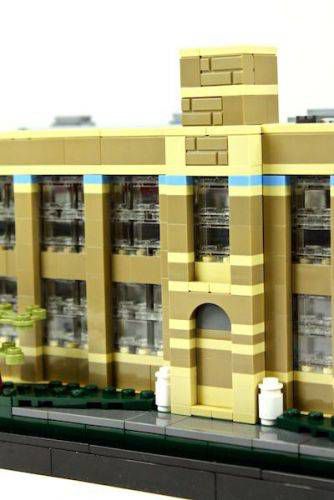 There’s the book drop that patrons can drive up to (or, technically, where the mini figs can drop off their books in their Lego cars). 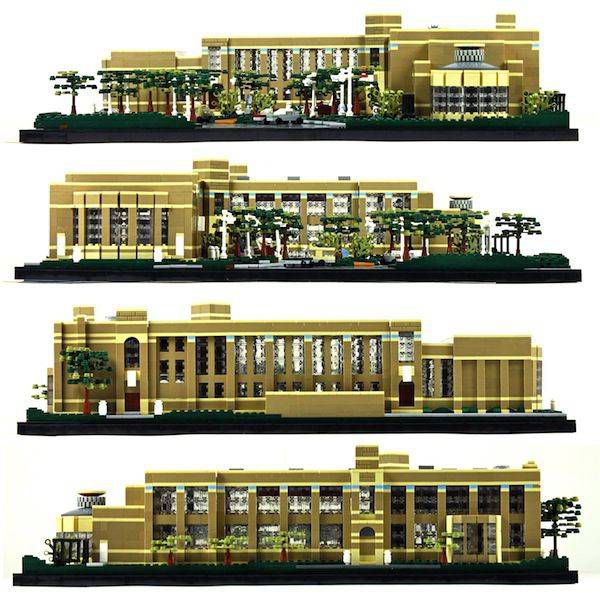 And here’s a look at the profile of the library from all four sides.

On his Lego MOC page, you can read even more about Vermeesh’s process in creating the library, as well as see a ton more images of this impressive Lego creation.

Are there other awesome Lego libraries and bookstores out there, modeled after real ones (or close enough to real ones to be believable)?