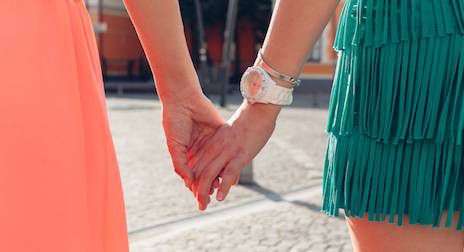 You don’t know me. You may have read a post or two of mine, or seen my name cross your twitter feed, but chances are we’re not exactly bffs. I’m a white, queer, cis gender woman currently living in South Carolina. I’m a liberal. I’m an academic. And despite the fact that I grew up working class and came out at a relatively young age, I’ve never faced a whole lot of discrimination, oppression, or violence because of who I am. A whispered “dyke” in the locker-room is the worst it ever got for me, and because I could bench my own body weight by the time I was a sophomore in high school, even that wasn’t a common occurrence.

I am incredibly privileged, because of my skin, my affect, and my socioeconomic situation. My experience is not the story of my friends who had homophobic messages keyed into their cars over the weekend in Iowa. It’s not the story of an Episcopal church in Indiana or a Mosque in New Jersey, both spray painted with messages of bigotry and intolerance. We are seeing the racism and hate that has long existed in the United States be loosed from the restrictions of social civility, thanks in part to a President-Elect who embodies racist, homophobic, misogynistic, and xenophobic talk. I am a white, cis, middle-class woman and I am completely terrified. I don’t know how gender nonconforming folks, Muslims, and/or people of color are even getting out of bed in the morning.

Things are not okay. It might not work out. The quality of life for many people in this country just got a lot worse. So be sad. Be angry. Be scared. But most of all try to be brave. This past week I’ve taken inspiration from a handful of comics, both new and old favorites that explore bravery in different forms. Buckle up kids, we have a whole lot of work ahead of us.

Roxane Gay is one of my personal heroes. From the first time I saw her on the Melissa Harris Perry show I knew that she was a force for good in this world. So, no matter how much Ta-Nehisi Coates has been killing it on Black Panther (and he has), ever since they announced that Roxane Gay would be writing the title I have been waiting with much anticipation and excitement. The wait is over and totally worth it. Roxane gave us a queer love story within the World of Wakanda. We met Aneka and Ayo in Coates’s very first issue, and in Gay’s we go back to their first meeting. I can’t wait to see where she takes us. 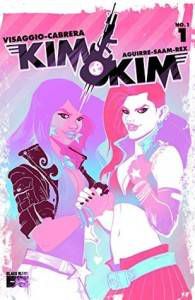 Smart, irreverent, and utterly badass, Kimiko Quatro and Kimber Dantzler, or Kim and Kim, are the bounty hunters of the future you never knew you wanted. They swear like sailors and smoke like chimneys, and along the way fight robot apes, save octopus men, and travel through space in a van that kind of looks like the Mystery Machine with wings. What makes K&K so utterly queer is more than just the identification of it’s characters or the easy way that queerness is spoken about. It’s everything. The world, the very air they breath is steeped in the “Queeriachy,” and it’s awesome.

The Boy in Pink Earmuffs by Jay Fuller

This might be the cutest comic I’ve ever read. For real. Danny, the title character, and his friend JJ, super sleuth their way into solving mysteries (kinda) while navigating the pangs of first baby gay love. Gah, so cute. This webcomic splices silliness with social commentary, particularly around how many feminine of center boys have to negotiate toxic masculinity.

I doubt there are many LGBTQA+ comic fans that haven’t yet read (and loved) Lumberjanes, but just in case you somehow missed it let me sum up the awesomeness for you. Mal, Molly, Jo, April, and Ripley are spending the summer at Miss Quinzella Thiskwin Penniquiqul Thistle Crumpet’s Camp for Hardcore Lady-Types. (I kid you not.) Led (more like wrangled from time to time) by their camp counselor, Jen, the members of Roanoke Cabin get into supernatural high jinks every chance they get. Queerness abounds. Also, smart girls can defeat anything.

Maybe the queerest superhero team ever assembled. From Billy and Teddy’s devotion to each other to America and Kate’s biting banter, Young Avengers reads like a love letter to the LGBTQA+ community. This is not a romance comic however. They’re the Avengers for goodness sake. There is both kicking of a lot of ass and taking of a lot of names. But flirting? Yes, I’m totally here for the flirting. Princess.