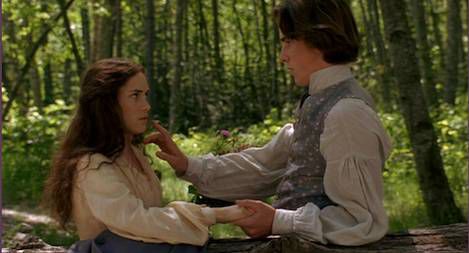 The first time I read Little Women, I remember being absolutely devastated Jo didn’t choose Laurie. It was just plain wrong! He was handsome, creative, and passionate. They had been friends forever and he had loved her all along — wasn’t that the most romantic love story of all?

This feeling lasted for about a dozen years after first reading the novel. When I re-read the novel in my early twenties, I still technically thought Jo should have ended up with Laurie, but I started to feel uncomfortable about feeling that way. Wasn’t it weird, I thought, to feel that way when the character of Jo so explicitly rejected his proposal? Wasn’t it a bit like telling a dear friend she should date someone she wasn’t crazy about just because he had feelings for her and is such a good guy? I dismissed this though because a) death of the author, non-canonical pairings are a-ok, etc. and b) I have a moderate grasp on reality and I do recognize Jo is a fictional character not my friend.

I felt … weirdly incensed about this discovery? Like SOMEONE WAS RESPONSIBLE for telling me and they had fallen asleep on their watch. But of course, someone had told me; I just hadn’t believed her until now. To save anyone reading this the same indignant fate, I will now detail for you my case against Theodore Laurence: Secret Nice Guy™.

The first red flag comes courtesy of when Laurie reveals that he has cabled for Mrs. March to come attend to an incredibly ill Beth, Jo “flies at” him in a rush of emotion. He hugs her back and, attempting to comfort her, kisses her. When she realizes what he’s doing she says, “Oh, don’t! I didn’t mean to; it was dreadful of me.” Later when she asks how she could ever repay him, he “mischievously” replies, “Fly at me again; I rather like it.” Jo’s response? “No, thank you.”

I mean … it’s pretty tasteless to flirt with someone over their beloved sister’s potential deathbed? Oh how nice, you — an exhausted, terrified, and now grateful woman — hugged me because I got your mom to come care for your dying sister; touch me again maybe?

If nothing else, this moment sees Jo firmly establish her romantic disinterest: Laurie kisses her and she says don’t; Laurie flirts with her and she says no. What should basically be the end of his advances becomes the beginning of a pretty regular pattern. To wit:

When Laurie talks about marriage in a significant tone of voice and teases Jo that she will be next, she replies, “I don’t like that sort of thing … don’t say any more about it.”

When he continues in this vein she “look[s] quite ready to fling cold water on the slightest provocation” and says, “Let’s change the subject.”

When Laurie says half of everything he owns will always be Jo’s in “a tone that always made Jo thorny,” she scoffs,“Gracious! I hope not! half of some of your things wouldn’t suit me at all.”

When Laurie “suggestively” asks if Jo would “bless him forever,” she literally shuts a gate in his face and says, “Go away, Teddy; I’m busy.”

When Laurie collapses next to her on a sofa and states, “a fellow deserves petting and ought to get it” she again retorts “I’m busy.”

When he continues to flirt with her, she tells him to “Go and sing for me … go and make yourself useful.” He lingers until she finally asks, “are you going?” and grabs a pillow whose express purpose is to provide a physical barrier between her and Laurie.

The story of Laurie and Jo is not, as I had previously remembered, one of Jo seeming like she loves Laurie and making an out-of-left-field decision. It is very much in the field!  Jo consistently indicates that she does not have feelings for Laurie, does not want him to flirt with her, and tries to prevent him from doing so every time he flirts with her. And he ignores her, again and again.

But wait, there’s more! When Jo realizes that her very consistent attempts to communicate her disinterest are not working, she decides to move to New York for adventure and also to get away from Laurie. The last thing he does before she leaves is lean in and say, “It won’t do a bit of good, Jo. My eye is on you; so mind what you do or I’ll come and bring you home.”

It is INCREDIBLY CREEPY for a man to basically tell a woman that he’s always watching her, and that if he doesn’t like her behaviour he’ll come and get her.

Unfortunately for Jo, her attempts to evade and explicitly reject Laurie’s feelings don’t work. Over her protestations (“Teddy, please don’t”) he proposes to her anyway. When she points to her many many indications of disinterest, first he feebly tries to suggest that some girls say no when they mean yes (RED FLAG). Then when Jo replies “I don’t. I never wanted to make you care for me so and I went away to keep you from it if I could,” Laurie admits “I thought so.”

HE KNEW ALL ALONG SHE DIDN’T LOVE HIM. He correctly read all the signs, he just ignored them anyway!

Look, I have been in unrequited love. I get that in your heart of hearts you sometimes cling to the merest scrap of suggestion that the person you love might love you too. I also get that sometimes you feel the need to confess your feelings even when you know they are not reciprocated. It is a selfish impulse to lessen your own emotional burden by adding to another’s but it is human and we are base, selfish creatures from time to time. But there is a difference, though, in keeping your hope alive and continuing to pressure someone into confirming it; there is a difference between confessing your hopeless feelings and attempting to manipulate, cajole or otherwise pressure their object into returning them.

Which is exactly what Laurie does. When Jo tells him the perfectly valid reasons they wouldn’t be a good match (essentially, their temperaments are too similar and their lifestyles and preferred social lives are too different) Laurie’s response is, “If you loved me, Jo, I should be a perfect saint — for you can make me anything you like.”

No. The last thing I would want for any smart, spirited and independence-loving woman is for her to devote her time and emotional energy to reforming her husband and to making him the kind of person she would want to marry after they are married. That is a prison.

Laurie’s attitude towards (non-March) women in general isn’t the best. Part of his wooing of Jo entails telling her how comparatively “sensible and straightforward” she is. In other words, you’re not like those other girls.

At one point, Laurie goes from waxing poetic about how much he loves flirting and being flirting with to how much he disdains the women who do the flirting. Now obviously this kind of double standard was in no way unusual during the period when Alcott wrote her novel, but it’s worth noting that Jo essentially tells Laurie it’s his fault for flirting with them in the first place: “if you behaved properly, they would.”

After being rejected by Jo, the narrator describes Laurie as someone who “made no effort of any kind but just let himself drift along as comfortably as possible …feeling that all women owed him a kind word because one had been cold to him.”

This is classic Nice Guy™, yes? He doesn’t have much going for him at the moment but believes his heartache makes him special or deep and entitles him to female attention.

But I think the moment that most clearly made the Laurie as Romantic Prospect = Modern-Day Nice Guy™ connection clearest in my mind is when Jo explained to Marmee why she can’t marry Laurie: “I couldn’t fall in love with the dear old fellow merely out of gratitude, could I?”

NO, YOU SHOULD NOT. THANK YOU, JO. This, unfortunately, is exactly what most Nice Guys™ who bemoan being stuck in the “Friend Zone” think. They think they deserve a reward for treating a woman like a person; they think friendship entitles them to romantic love or sex. THEY ARE WRONG.

There may be some who would accuse me of selective reading. After all, Laurie isn’t a terrible person! He’s a kind, generous friend to the March family! And Jo does care for him tremendously! She gives him the nickname Teddy and calls him “her boy”! To which I say: yes, but all of this can be true and Laurie can simultaneously still be a terrible potential partner for Jo. Laurie is at his worst every time he expresses his feelings for her. And if the person you have feelings for turns you into the worst version of yourself? They’re not the one for you (and vice versa).

What I realized re-reading Little Women as a grown-ass adult is this: making Jo and Laurie perfect for each other wouldn’t just require a different ending, it would require an entirely different book. So, it’s been over twenty years in the making, but better late than never: Louisa May Alcott, I’m sorry. You were right.*

*Please note: vote against Laurie is not a vote for Bhaer. There might be a case to be made for him but that is not what I am doing here