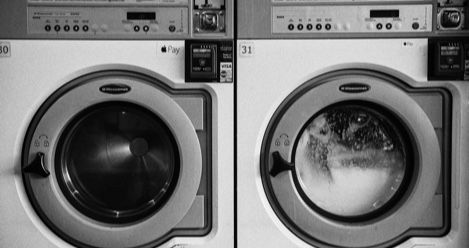 But why hold story hour at a laundromat instead of a library, or perhaps at a coffee shop? Becca Ruidl, who runs the Laundromat Story Time program, told U.S. News & World Report the idea is to make the program as convenient and accessible as possible. Since everyone needs clean clothes, and kids often join their parents on jaunts to the nearest laundromat, it seemed like a smart place to start.

Libraries Without Borders, which co-sponsored the Chicago program along with the LaundryCares Foundation, has held similar “Wash and Learn” programs in other cities. Pop-up libraries have appeared at laundromats in New York and Detroit as well as in Pittsburgh, Pennsylvania and St. Paul, Minnesota.

What a great idea!

This is the nature of movements. Like waves, we can’t see them when we’re in them. “Movements are made up of moments, strung out over months, years, decades,” writes Rebecca Traister in her book Good and Mad. “They become discernible as movements—are made to look continuous and coherent—only after they’ve made a substantive difference.”

Celeste Ng writes about activism and how many of us have been feeling since 2016.

Today in weird book news, Chooseco LLC, the “Choose Your Own Adventure” book publisher, sued Netflix over Bandersnatch, claiming that the interactive film “deliberately exploited the brand awareness of its book series to launch” the Black Mirror special, according to Variety. Per the lawsuit, which may be read here, the Vermont-based Chooseco is asking for $25 million in damages.

Choose your own lawsuit—sorry, not sorry.