Language influences culture and changes the way we see the world. Some of us adore correctness in language, grammar and precision to the fore, others take a laissez faire approach and shift words and grammar for greater expression. Whichever camp you fall into, and I’m in the latter, language is important.

Nowhere is this more easily demonstrated than in environments where language shifts and changes with mercurial swiftness. This quick change is outside of the mainstream and one area where language is always changing is in LGBTQ2 culture. Definitions come and go, and what was briefly de rigueur (trans*) becomes outdated and unused. Nowhere is this more evident than in literature. 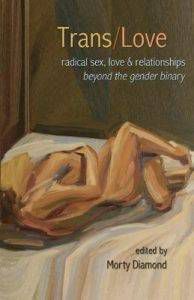 I recently finished a book called Trans/Love, Radical Sex, Love & Relationships Beyond the Gender Binary, ed. Morty Diamond, Manic Press. It’s a book that presents slice of life stories from contributors and they cover a wide swath of subjects that most people may not be familiar with. Some of them are positive and life affirming, others are sad and you’re left wondering how, or if, life got better.

As I read this book over the course of a couple of nights I was left with a sense of wonder at all the different ways transgender people can transition. I certainly related to some of the stories; others I looked at and struggled to fully comprehend. Trans people can learn different views from the book. For cisgender people it’s a little bit like getting thrown in the deep end. You’ll learn so much or just get very confused.

Where I struggled most (and it made me put down the book on multiple occasions) was the language used by some of the contributors. It read as archaic to me (yes I know this isn’t Chaucer, the book was published in 2011) but I found some of the words used to self describe to be offensive in 2016. To be transgender is not like being part of a monolithic organisation where ideas and actions must all be the same. What I find offensive is nothing to others as every person’s opinion differs to a greater or lesser extent.

When I read the word ‘transgendered’ in a book, especially in one written by trans contributors, I cringe, as the word doesn’t exist. Normally word twists wouldn’t bother me, but language around my identity is important. Worse is the word transvestite–as a transgender woman I have never been a transvestite, and these days when I hear that word all I think of is Rocky Horror. It’s a word that most people haven’t been using since the early 1980s.

When I came across the first use of that word in this book I had to pause, let my revulsion run its course, and then continue. It was the same with transexual, an outdated term I usually only see in academic works as they are slow to change. The worst was use of the word tra**y, which for many trans people is hate term as strong as n****r and should never be used. When I saw that I walked away, made a cup of tea, then debated whether I read the rest of the book.

Context is important and in this book no offense is meant as trans people are telling their stories in words that they identify with; words that don’t offend them (or didn’t back when this was written), even if I struggle with them now. Language shifts with culture and influences culture, when we look back, even to 2011, LGBTQ2 language has changed a lot. When we read older works it’s to be expected that language has evolved, but it happens a lot faster in transgender culture especially.

Getting through and past those language changes can be work. If you’re looking to read slice of life by a trans author I’d suggest Redefining Realness by Janet Mock, not because Trans/Love is bad but because Janet’s book is much more accessible. What I find funny is I wonder if in a few years this piece will be critiqued for outdated and offensive language. Viva la language revolution!