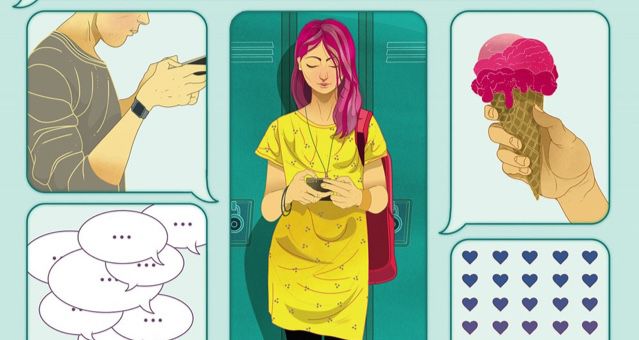 You may not realize it yet, but Technically You Started It is your fav new YA beach read. Debut author Lana Wood Johnson serves up a summer sweet, emotionally fraught-slash-hilarious teen romcom plot line perfect for fans of Netflix movies like To All The Boys I’ve Loved Before. 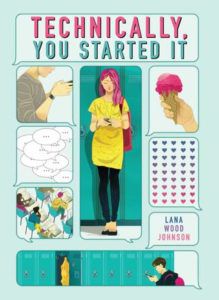 Johnson also includes a thorough discussion of anxiety disorders, bisexual and demisexual identities, the effects of parental divorce on teens, and way more nerdery per capita than most books this size. Oh, and did we mention it’s also written entirely in text messages?

That’s right, Technically You Started It is the latest example of an epistolary novel, a type of book you might remember from the 2019 Read Harder challenge. These are books written in the form of letters, diaries…or texts. As with so many of these sorts of books, Technically You Started It is a story that just wouldn’t work as well told in any other way. Reading these texts pulls you right into the characters’ world, making you feel sort of like you’re secretly skimming your best friend’s DMs (assuming your BFF is both hilarious and wise in equal measure.) And, teacher-librarians take note: the format makes this an ideal pick for reluctant readers and new English speakers!

In case you weren’t already won over, peep the summary:

When a guy named Martin Nathaniel Munroe II texts you, it should be obvious who you’re talking to. Except there’s two of them (it’s a long story), and Haley thinks she’s talking to the one she doesn’t hate.

A question about a class project rapidly evolves into an all-consuming conversation. Haley finds that Martin is actually willing to listen to her weird facts and unusual obsessions, and Martin feels like Haley is the first person to really see who he is. Haley and Martin might be too awkward to hang out in real life, but over text, they’re becoming addicted to each other.

Ann Foster: Tell us about your decision to write Technically You Started It entirely in text messages. Is there something about the story itself that marries well to that format…anything that you can get across via text message more effectively than in traditional prose? And conversely, what were some of the biggest challenges of writing in this style?

Lana Wood Johnson: I definitely decided on the format before the story I wanted to put into it. I usually have snippets of ideas of stories or characters, and then when I’m ready to build a whole story I pull the snippets together. This story came together when I started volunteering for the Text for Help Line at a local youth crisis shelter.

I’d had the idea for a text-based story–but not the motivation to figure out the logistics—until I started helping actual teens. I figured I was too old, but what I learned there was that I had an unusual connection to the teens in the medium of texts. Others who hadn’t spent the last couple decades making all their friends on the Internet didn’t realize how much inflection and tone can be gathered just from how the youth are explaining their problems. Not only was I able to help teens in the area, but I was able to teach some of my skills to the youth workers.

I didn’t use any of the teen’s stories in Technically You Started It, but I did get inspiration from their biggest concerns: homework, mental health, family, relationships. It was important to me that the story not be tragic, but hopeful, which is why I put it inside of a cute romcom package rather than anything more intense. Too often, books take these topics that are elements of our everyday lives and make them seem bigger and more tragic than they are, when in reality we’re also having fun and making connections with people not despite our mental health or identities, but because of them.

What I DIDN’T anticipate was the challenge in maintaining the balance between authentic text communication and clarity. Texting is the closest we get to written Spoken English, which is a language with distinct rules from Written English and often has a very personal set of grammar guidelines. For example, Martin has an allergy to commas in most situations, but commas are super important for the clarity of Written English, which most readers are expecting. A lot of attention was paid to the trade-offs so that it would still read coherently, but still feel like Martin and Haley’s text transcript.

AF: What are some of your favourite epistolary books? Did you keep any qualities of those in mind while writing Technically You Started It?

LWJ: Daddy-Long-Legs by Jean Webster is both my favorite epistolary and a big influence on the story for Technically You Started It. While now it would probably be classified as crossover, it definitely has the sensibilities of an early YA novel even though it was first published in 1912.

I admire how she told the story from a single point of view and yet the reader felt like they knew more about what was happening than the narrator. But where the main character Judy is naive and trusting, Haley tends to be over-confident and opinionated. Both stories rely on the character’s voice to drive the story and after years of online roleplaying that always felt a much more comfortable place to write from than a convoluted plot.

AF: You incorporate several elements of 21st century online culture in this book, like online quizzes and social media newsfeeds, and you show how those can encourage communication and help teens connect. How might this story, or one like it, have played out 20 years ago? Is the online communication crucial to the development of the story?

LWJ: The irony is that this story represents a very twentieth century experience I had. Twenty-five years ago, in fact, I entered college and had access to the Internet for the very first time at my school’s computer lab. Of course, since it was 1994, I didn’t have very many friends online. In fact, the only other person I knew from my friend group who used the Internet was someone who we all would have classified as my nemesis. And yet, somehow, using the TALK application in our UNIX shell accounts, he became one of my best friends. He helped me through my parents’ divorce and encouraged me to transfer to the university of my dreams. While it wasn’t a romantic relationship, it was absolutely a vital one.

In fact, a lot of what you’d consider modern Internet elements of the story come from that same period. From friends trying to enforce fun on the rest of the group (that would have been me) to repeated takings of the Purity Test that was always being passed around in one form or another since the 1970s. The Internet is evolving, but we still managed to have complicated friendships, memes, and quizzes long before we had enough bandwidth for images, let alone gifs.

AF: Haley and Martin discuss the Kinsey Test, which inspires Haley to learn more about her demisexual identity, and also allows for Martin to share his bisexual identity with her. Do you think that this sort of conversation is easier for the characters to handle because it’s through text messages, with that distance? Do you have ideas of how teen readers who don’t have a sweet pen pal explore these ideas for themselves?

LWJ: There is definitely a certain freedom that comes with not having to share physical space with a person you’re having intimate conversations with. The things you worry about sharing are less, because your energy is no longer in closely reading their body language. You can ask things you normally wouldn’t and share things you normally can’t.

The magic of the Internet is that there are more places than ever to find your “community” (those people who welcome you among them as one of their own). I found my writer community on Twitter, but I also found my queer community there as well. Before then I hadn’t known the words for asexual, let alone demisexual.

When you’re exploring things about yourself, another person is helpful but not necessary. I also found a lot of myself through writing and reading in the days before the Internet. I was never a great diarist and even worse at creative writing, but I could write an emotional poem. There weren’t all the words for identities we have now, but there were feelings and as Dr. Rudine Sims Bishop pointed out, you never quite know when a window will become a mirror.

AF: This is one of the nerdiest books I’ve ever read, incorporating online gaming, comic conventions, and cosplay among countless other nerdy pursuits. What is your favourite piece of nerdery you worked into the plot line?

LWJ: When I decided that they both played World of Warcraft I knew I needed to add in a reference to my old guild. In the early days (around Burning Crusade) I was a hunter-class officer and the highest DPS in the guild, but the REAL fun was getting a bunch of folks who just wanted to hang out together and run Karazhan (first made famous by one Mr. Leeroy Jenkins). We’d play with some of the guildmember’s kids and casual players and just have a good time.

The same is true for our Magic: The Gathering games referenced in the book. So much of nerd culture has an often-well-deserved reputation for being highly competitive, but there’s also folks who play just for the joy of it. Like telling a happy, fluffy queer story I also wanted to tell a happy, fluffy nerd of story of teens just having fun being who they are.

AF: Thanks for answering our questions, Lana!

You can follow Lana Wood Johnson on Twitter @muliebris. Technically  You Started It will be published in June 2019 by Scholastic.