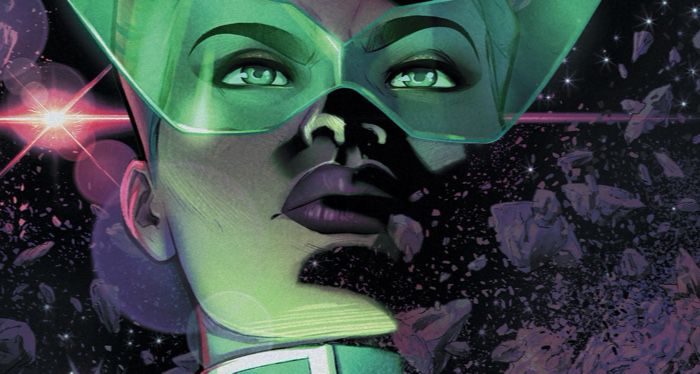 3.5 billion years ago the Guardians of the Universe, refugees from the planet Maltus who settled on Oa, created the robotic Manhunters to protect the universe from evil. The Manhunters rebelled against their creators and had to be dismantled. In their place, the Guardians assembled a force of living beings, each in possession of a “free will” and “strong moral character,” each equipped with a ring that projected and shaped energy into constructs limited only by the desire and imagination of the bearer. Numbering in the dozens at first, the Green Lantern Corps has grown exponentially in the last 1000 years with the Old Corps (Pre-Crisis) numbering approximately 3600 and the New Corps (Post-Crisis) 7200 members.

Unlike other superhero groups, the Green Lantern Corps has always welcomed female-presenting members, with three of the original seven using she/her pronouns (one of whom was the first sentient planet). That’s like, almost half, which is still a better record than many current day teams. Many other Lady Lanterns have come and gone since the Corps’s inception in 1959 (3.5 billion years ago in comic time) and it seems only appropriate that in celebrating the 80th anniversary of the legacy title’s inauguration, we dedicate some air time to them.

I’d love to give you a retrospective on all the work women have done for the Corps, but that’s a book length project (which…maybe someday) so for now, I’ll stick with my three favorites. 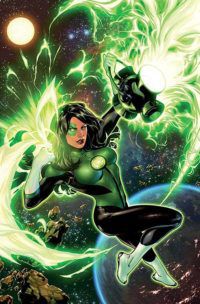 Jessica made her first appearance in July of 2014 and her induction into the Corps wasn’t nearly as pleasant as most of her compatriots’ due at least in part, I would imagine, to the writers given the task of introducing her (I’m very deliberately not naming names here because I don’t want to give them air time).

While on a hunting trip with her friends, Jessica happened upon mobsters burying a body; the gangsters killed her friends and though Jessica escaped, she experienced such severe PTSD she locked herself in her room for four years, hoarding food and water. Her first ring, the Ring of Volthoom, which had previously belonged to the Crime Syndicate (evil parallel universe versions of Justice League members) possessed Jessica without her permission and used her trauma and fear to prod her toward violence. It was only later, with the actual Justice League’s assistance, that she learned to control the Ring.

When Darkseid’s daughter arrived on Earth with the intention of going to war with her father, she took control of the Ring of Volthoom to summon the Anti-Monitor as her champion. Jessica helped Mister Miracle break the Crime Syndicate out of prison to help control the monsters of Apokolips, but being in their proximity strengthened the Ring of Volthoom’s powers and it possessed Jessica once more, actually pulling her inside of it and taking over her body and mind.

Jessica summoned enough will to save the Flash from one of the New Gods, though the effort (apparently) killed her. The New Gods destroyed the evil entity in the Ring of Volthoom and it crumbled. Because she was able to defeat her fear and prove her strength of her will, Jessica was rewarded with an actual Corps ring and became another of Earth’s Green Lanterns. Her Lantern Corps partner is Simon Baz, and Jessica is also a member of the Justice League. She features prominently in the newest incarnation of the DC Superhero Girls franchise.

Unlike other human Lanterns, who all overcome something negative to find their place in the Corps, Jo is already a fully realized hero when the reader meets her in N.K. Jemison’s Far Sector. She knows exactly who she is and doesn’t need anyone’s permission to use her ring, or her will, to get her job done. She’s struggled as a woman, as a Black woman, and as a human in a far away place, but instead of bringing her down those struggles have given her purpose, confidence, and a sense of the space she deserves in not only the world, but the universe. The only reason the leadership of the City Enduring has allowed a Lantern in is because they’ve heard trouble is coming and they want someone else to take care of it; Jo is not only willing, she is one hundred percent sure she’s able, in a way that’s not cocky or arrogant but that’s smart, savvy, and self-assured. 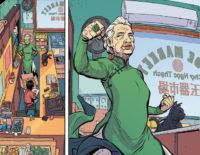 Minh Lê and Andie Tong gave us not one but two new Lanterns in Green Lantern: Legacy: Tai Pham and Kim Tran. Tai is a fantastic new Lantern who reminds all kids, everywhere, that anyone can wear the ring. And a lot of people, myself included, think his grandmother, Kim, from whom Tai inherited his ring, may be one of the greatest Lanterns of all time, surpassing Hal Jordan (who we here at BR generally  consider to be meh but do have to acknowledge as the first human member of the Corps).

Kim used her powers to help people escape Vietnam during the war, risking her own life to do so. Once she arrived in the States, she continued to use them to keep her neighborhood safe. She was John Stewart’s mentor. Iolande calls her “a warrior. Possibly the best of us.” She helped raise a grandson worthy of inheriting her ring, the first time in the 80 year history of the legacy title and the 60 year history of the Corps a relative has had Lantern ring passed down to him.

How could she not be one of my favorites?

If you’re looking for a place to jump in to the Green Lantern mythos, I highly recommend starting with one of these ladies. They’ve each got their own stories to tell, and all of those stories are phenomenal.