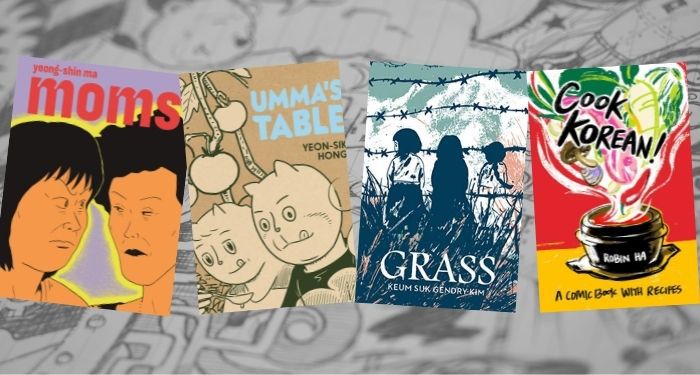 A few weeks ago I stumbled upon the Koreadathon, a readathon put together by two BookTubers: monica kim and books with chloe. Long story short, I loved it (it was my first readathon ever). But that’s not quite why I’m here. The readathon challenged participants to read a manhwa, graphic novel or webtoon from a Korean author. I’m already familiar with manhwa and webtoons. So I beelined towards the graphic novels and found a tiny but amazing corner of stories that I just have to share. During that week I just read one graphic novel. But choosing only one was such a hard decision because there are several amazing Korean graphic novels out there. Most of which I’ve compiled in this handy list for you!

Without further ado, let’s get into it!

8 of the Best Korean Graphic Novels 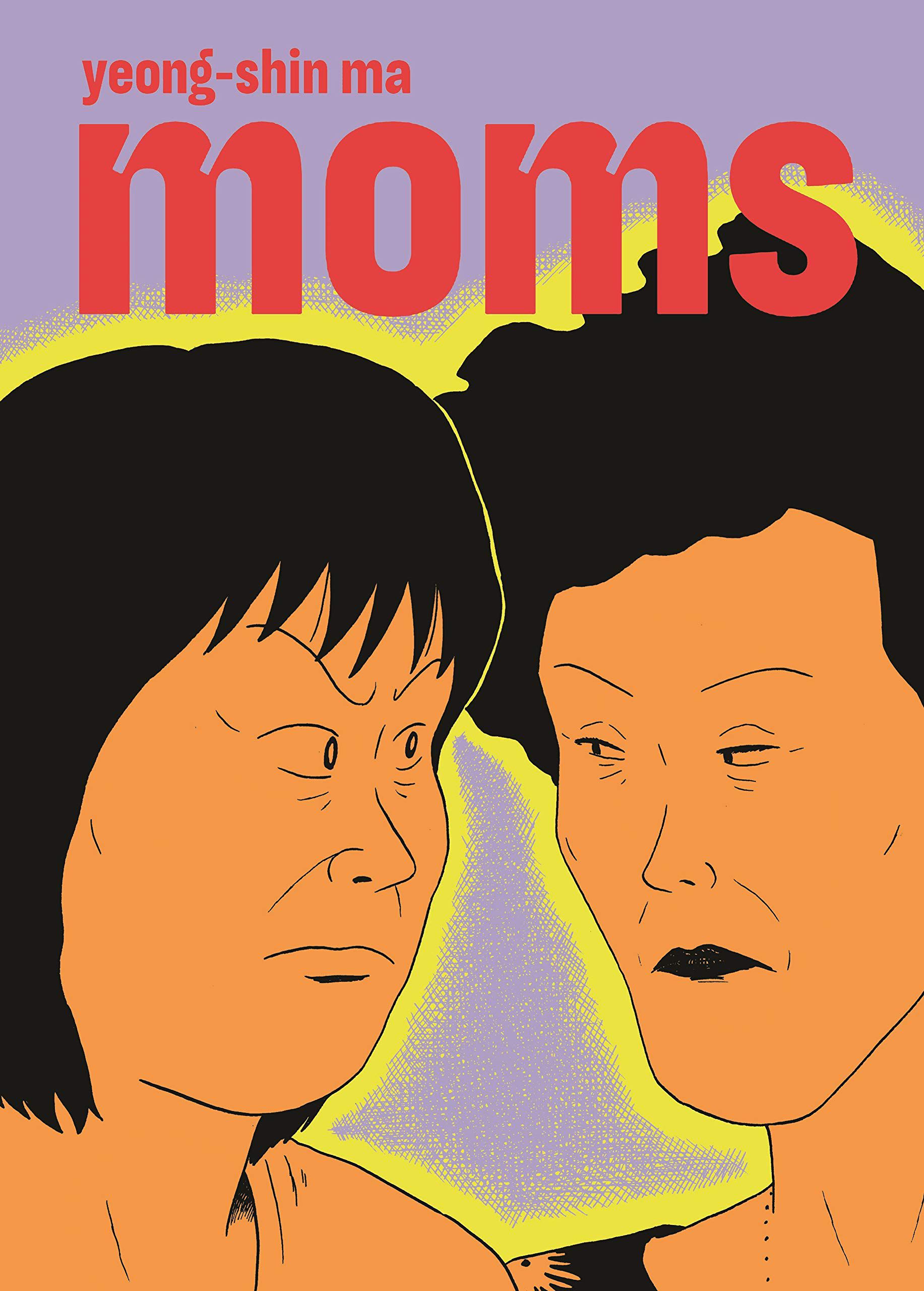 We’re kicking things off with a funny graphic novel. It’s a slice-of-life type of story that shows three middle-aged mothers who want more than what the mediocre men in their life can give them. There’s Lee Soyeon, who divorced years ago but is now in another unfulfilling relationship. Myeong-ok, on the other hand, is having an affair with a younger man. And finally, Yeonjeong has her eye on someone from her gym (don’t tell her husband). They’re all bored with their conventional romances, so they go wild in a way more often attributed to twentysomethings. Through motels, nightclubs, and outrageous sexual encounters we follow these three women in their new honest and vulnerable adventures. 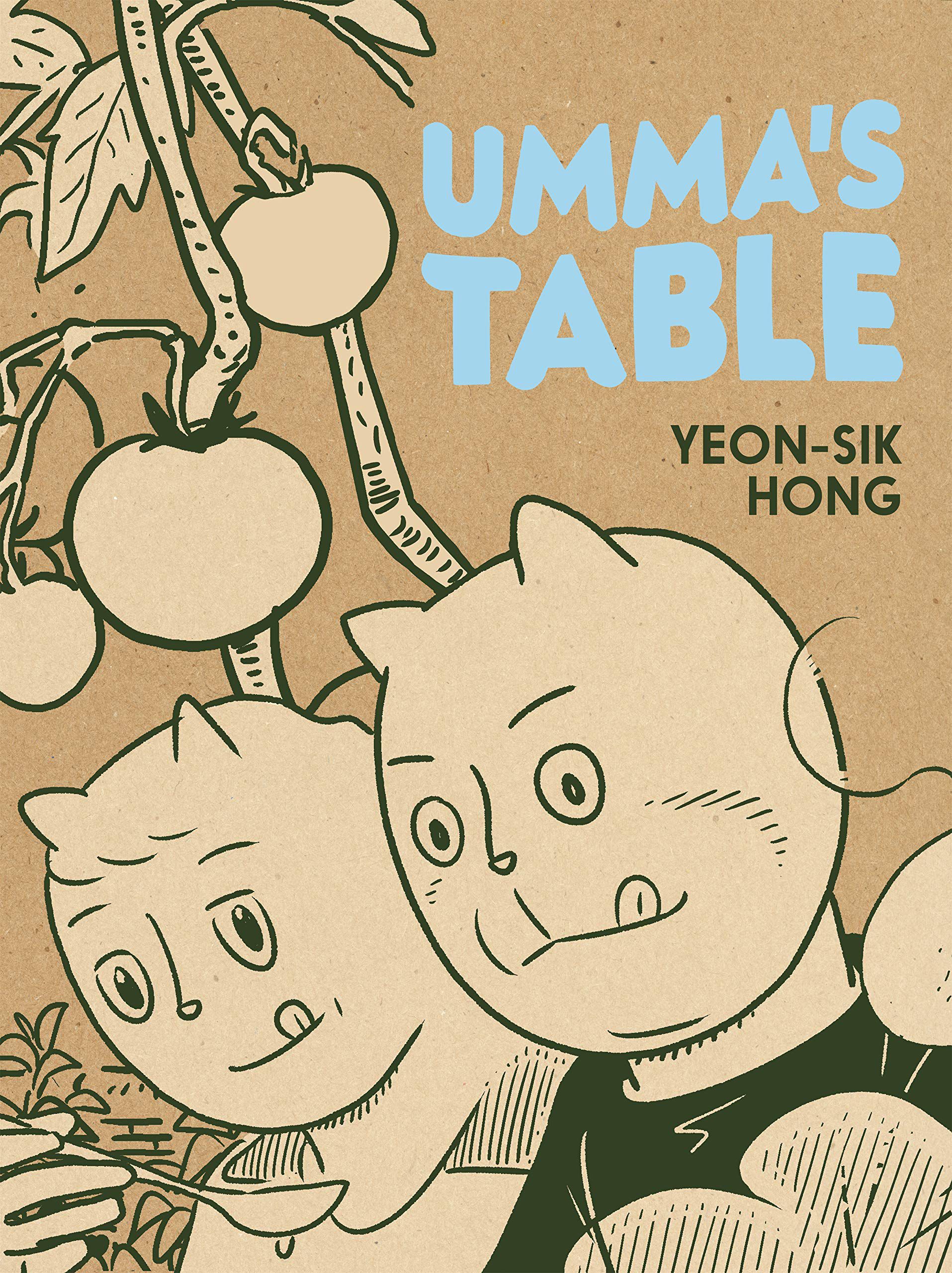 This is a very soft and bittersweet graphic novel about family and food. Umma’s Table follows a comic book writer named Madang, who moves to the countryside with his new family. His newborn baby changes his life, and what seems like a fresh start soon turns difficult. Madang’s parents are sick, and he constantly goes back to the city to care for them. It’s clear that Madang struggles to be a good husband, father and son simultaneously. So he throws himself into his cooking, reminiscing about his own upbringing and how his mother always had food on the table for him and his brother no matter what. It all feels like a thoughtful meditation on food and how it brings us together — bridging the gap between generations. 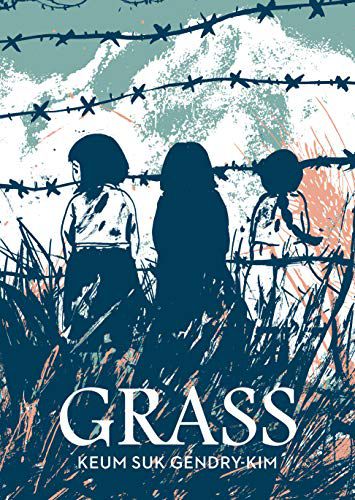 Graphic novels can be nonfiction too, and this is the frankly devastating kind. Grass is a story that documents the sexual slavery that some Korean women were subjected to during WWII by the Japanese Imperial Army, including a girl named Lee Okseon — who the author interviewed to make this graphic novel. Okseon was a child during the Japanese occupation, so we get to see the atrocities of this time through her vulnerable eyes. At the age of 15, she became a “comfort woman” for the military, which is basically a sanctioned form of sexual slavery. The author showcases this, but she also emphasizes Okseon’s strength and resilience to overcome it. 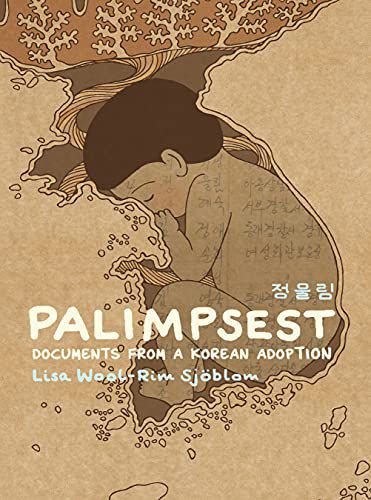 Palimpsest: Documents From a Korean Adoption by Lisa Wool-Rim Sjöblom

By the title you can probably already tell that this is the graphic novel in translation from Swedish I mentioned earlier. It’s also a memoir, and it discusses a time in the 1970s and ’80s when thousands of South Korean children were adopted internationally. One of those adoptees was Lisa Wool-Rim Sjöblom. She found her family in Sweden when she was only 2 years old. As she grew up, Lisa learned to suppress her curiosity for her home country. But a tiny thorn was left inside of her, and in this memoir, she explores her own feelings about the adoption. Especially since she discovered that she wasn’t an orphan without a background — when she sees her parents’ names on her birth certificate. This prompts Lisa to dig deeper into her own backstory, as she learns that the truth is more complicated than she ever imagined.

Banned Book Club is a graphic memoir that seems very relevant today, considering book bans are still a thing. The book is set during the 1980s, when South Korea was in the middle of a horrible totalitarian regime where people feared for their lives and protesters were publicly murdered. This was three years after the Gwangju Uprising (discussed in Human Acts by Han Kang if you’re interested in the political context) and things still looked bad for the population of South Korea. This is when Kim Hyun Sook entered college, and joined an underground banned book club. This is her story of relentless rebellion in the face of violence and fear. All through the joy of discovering great works of literature. 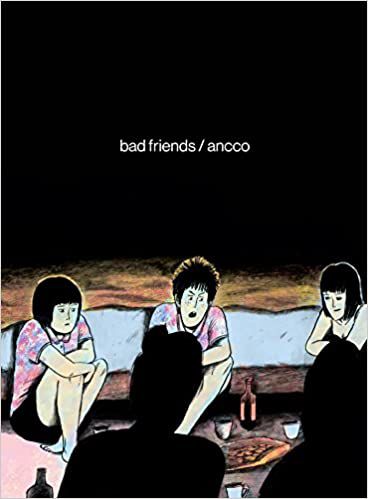 There are fun and easy graphic novels, and then there are the uncomfortable and difficult ones with much heavier topics. Bad Friends is the latter, as among other things it discusses child abuse. It’s the kind of story with sharp edges, but it’s also absolutely worth reading. It follows a woman named Pearl as she looks back at her childhood and adolescence. She had an abusive father, and teachers who beat her too. So one day she runs away with her best friend Jeong-Ae, who also had a difficult childhood. Things don’t pan out for them, and they’re forced to return — even though Pearl is the only one with a home to even get back to. It sounds pretty bleak, and at times it is. But the story also has an inherent warmth and hope amid the violence, especially in the excitement of adolescence and the promise of friendship. 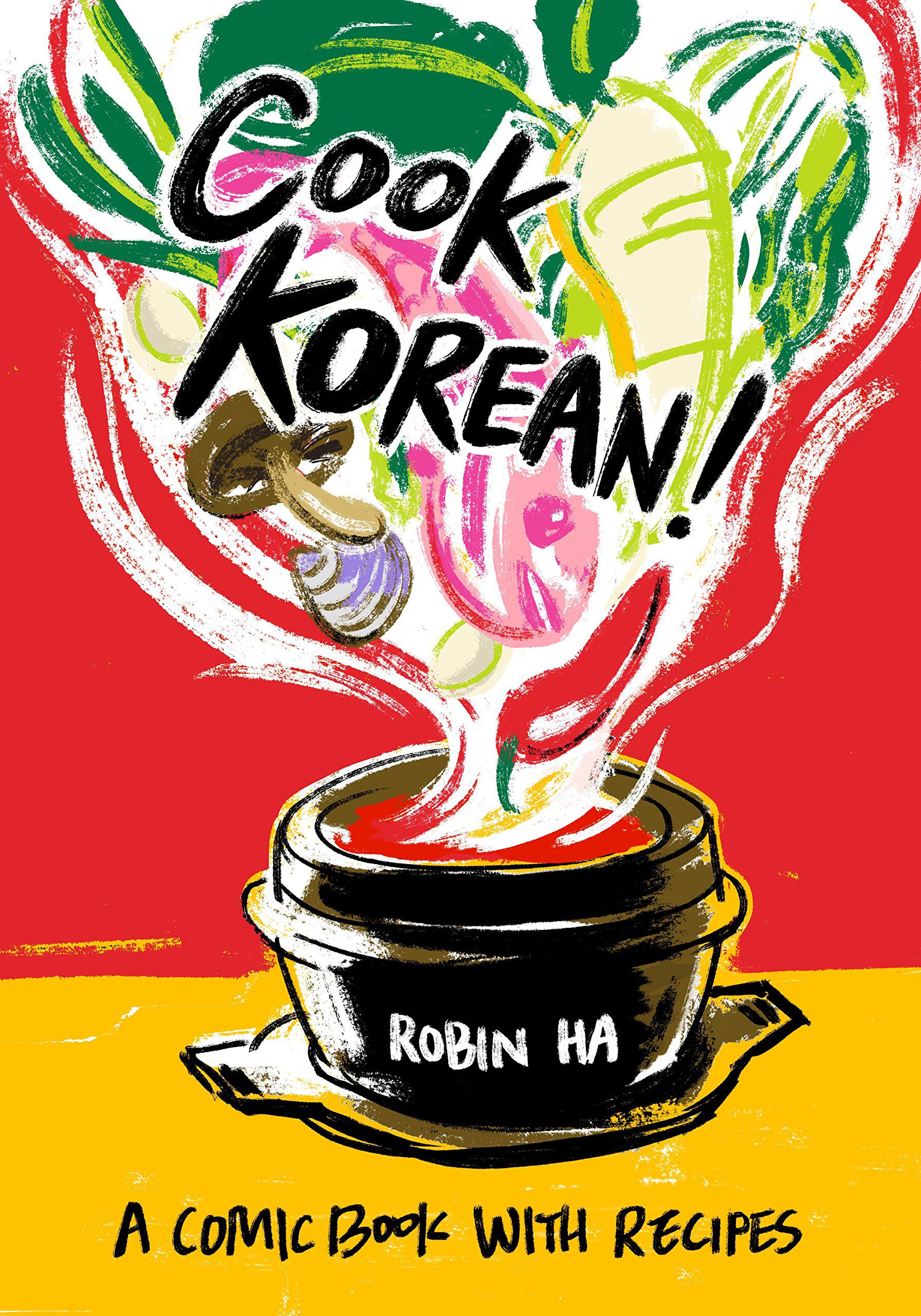 This is such a fun graphic novel because it also doubles as a recipe book. It’s one of the few graphic novels in this list that was written in English — the author is a Korean immigrant and has lived in the U.S. since she was 14. It’s the kind of light-hearted foodie graphic novel that is a joy to read. It does have a narrator in the form of a girl named Dengki, who explains the dishes and sometimes accompanies them with stories or cultural context. Plus, it also has a general introduction to Korean cuisine and ingredients before it jumps straight to the recipes. Of which there are more than 60! Whether you actually want to cook these or not, it’s a super fun and quick graphic novel to read. Believe me: with those drawings and descriptions, you will want to cook these recipes. 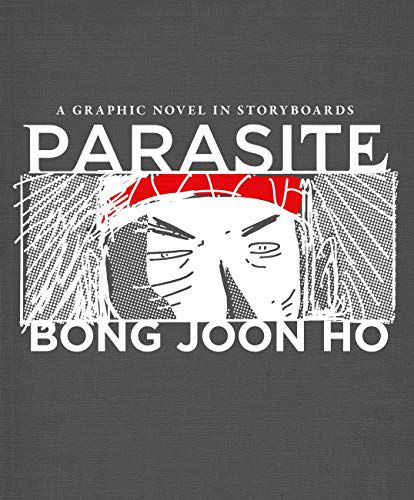 Parasite: A Graphic Novel in Storyboards by Bong Joon-ho

Last but not least, I think we all know and love Bong Joon-ho’s award-winning movie Parasite. We actually have a list of books like the movie, but this ain’t it. This volume compiles the storyboards of Bong Joon-ho to tell the story of Parasite as a graphic novel. His style is spare but detailed, and it is accompanied by the dialogue of the screenplay, as well as Joon-ho’s annotations so you can easily follow the story along. It also includes a foreword, extra scenes that didn’t make the cut, and concept art that help you delve deeper into the story. It’s more of a behind the scenes to something you might already know, but it’s absolutely worth reading and including in this list.

Want to read more Korean stories? We got you covered! We have talked about manhwa and webtoons before, as well as the best Korean light novels you can read online.