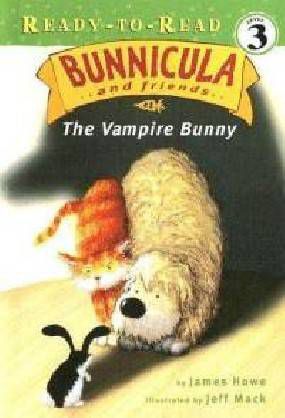 Let’s say you have a seven-year-old boy, like I do, who by day is full of bravado and is in to vampires, mummies, werewolves, and the like. By night he’s scared silly by his imagination. By day: “Let’s go the museum and look at mummies! C’mon, Mom!” By night: “Mom! The toilet paper is scary! That’s what the Egyptians used to wrap mummies in! Mom! Please sleep at the foot of my bed and guard the door from vampires! Mom!” Sound familiar? No? You mean this just happens at my house? 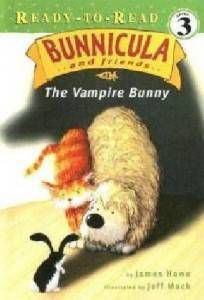 There’s a book for this kind of kid. Bunnicula: A Rabbit-Tale of Mystery by Deborah and James Howe, published in 1979. It became a well-loved series in our house, because the apple doesn’t fall very far from the tree, and I was a scaredy-cat seven-year-old that liked vampires, too. I looked forward to every title, The Celery Stalks At Midnight, and Bunnicula Meets Edgar Allan Crow.

Bunnicula takes as its theme vampire-hunting, and that lore (the garlic, the late nights, the stake — in this case, a steak), but the characters are funny shaggy dogs. Literally. Harold, a shaggy dog, is the narrator; Chester is the uber-intelligent, well-read cat; and Bunnicula is the bunny in question. There is suspicion that Bunnicula might be a vampire rabbit when vegetables in the Monroe family’s crisper turn up white, juice-less, and marked by little fangs.

“Tell me about the fangs,” my son says. I goof around, making rabbit fangs with my index fingers while thumping my hind leg like a hare. “That’s not scary,” he says with relief. I read on. “Mom how can Harold be telling this story, dogs can’t talk?” An introduction to the devices of fiction, is what I want to say, but I say instead, “Cool, hunh?” Fiction can do anything.

“Are there any vegetables in our fridge that have gone white?” He asks, “Maybe I can try to suck the juice out of a tomato?” My maternal ears prick up, not unlike Harold’s. Bunnicula the Vampire Bunny has not only softened the edge my son’s fears of the ghouls of the Western Canon, it’s gotten him to eat more vegetables. That qualifies it as a #kidlit classic indeed.