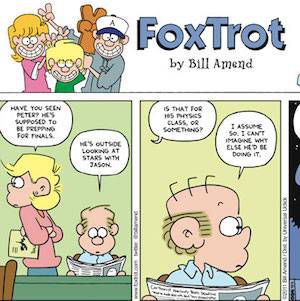 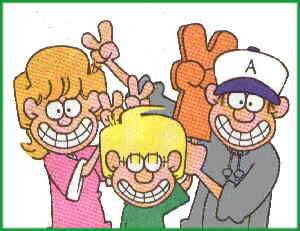 Jason, Paige, and Peter Fox from the comic strip FoxTrot.

If you’re like me then you aren’t Benjamin Button, and the chasm between you and the characters in books you read as younger person grows a little wider every year. Can we all agree that growing up is weird? I don’t know about you, but it doesn’t seem like all that long ago I was in third grade (see also: it was long ago) (see also: jokes about maturity that I’m not going to make). I’m sure we can all agree that books make really excellent markers when commemorating the miles of our lives, especially when we revisit those books when we’re a little further down our timeline.

It’s okay to get older. Tolkien called it “the gift of men”—isn’t that a nice euphemism for marching straight toward mortality after a brief stop at dentures, incontinence, and Lawrence Welk re-runs? Maybe it’s the gift of readers to age our way through a fictional family, to pause and measure the sameness and the difference between ourselves and the character we most closely resembled when we last read about them.

Just before Christmas break in 1993, my best friend Mike handed me a gift that he had obviously wrapped himself. “You’re gonna love this,” he said. I was skeptical, but I opened it up right away. It was a book; I remained skeptical. “It’s FoxTrot,” Mike assured. “It’s the best.” Friendship is the force against which skepticism knows no defense, so I took the book home and started flipping through it that same night.

Maybe the pencil marks on your own literary doorway were measured against the March girls when you were yourself just a little woman or man. I’m sure there are lots of people whose annual cruise through the Harry Potter books have brought them through the ages and stages of development of every last Weasley. I was a literary late bloomer, and my reading habits were simple. I had the Foxes.

Bill Amend’s FoxTrot didn’t appear in our local newspaper, so my sit down with Pass the Loot was my introduction to the Fox family, which includes parents Roger and Andy Fox along with their three children, Peter, Paige, and Jason. Mike was right—I did love it. Amend is clearly wicked smart, and laces the storylines with science and math references, but he makes it all just so tasty by marbling it with pop culture and plenty of genuine heart.

Through luck or synchronicity, I started reading FoxTrot when I was the same age as Jason, the youngest Fox. Like him, I was an unabashed nerdy kid, and I readily picked up every reference to Star Wars, Star Trek, The Young Indiana Jones Chronicles, and comic books that he could put down. Which were many. Jason was smarter than I was, and his obsession with calculus, computer languages and physics were lost on me, but he and his best friend Marcus lived in a world rich with imagination, and I completely identified with their role play adventures through the ice planet Hoth and the far reaches of Hyrule. 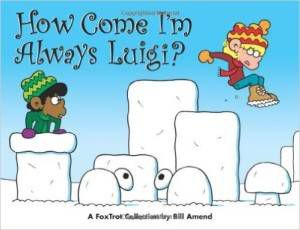 I also identified with the fact that his sister was four years older than him, and lived in a world I thought I wound never cross into.

Until I did. Paige Fox—a perennial high school freshman—follows a trajectory (wait…is that a physics term? Maybe there’s still a little bit of Jason left in me after all.) through dating, through the Scylla and Charybdis of teenage social circles, through getting used to the move from childhood to young adulthood. And something really bizarre happened in 1997: I caught up to Paige Fox in age and experiences. My group of friends changed. I struggled with algebra. I had mad crushes. I was seeing movies I wasn’t quite ready to see (see also: Scream). I was starting to think seriously about getting a driver’s license. Above all else, the world of pretend that I relished four years before was, according to society, supposed to be closed to me—the current of maturity carried me along, and I was surprised and relieved to have Paige there by my side to help sort it all out.

Unlike Paige, I couldn’t stay fourteen forever, and two short years later I was already in the company of Peter, the firstborn. Peter could drive, loved rock and roll, could play a couple chords on a crappy electric guitar, had a girlfriend he genuinely cared about, was aware that high school was going to eventually lead to some other more important place, but he wasn’t quite ready to take it too seriously just yet. He wielded some responsibility, but was mostly still trying it on for size. And, just like my sixteen year-old self, he still liked to play along with Jason’s romps into the ridiculous because maybe adulthood was approaching a little too fast. 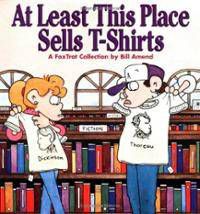 We’ll just have to agree to disagree about how much fun bookstores are.

I’m now twenty-one years removed from Jason (what), but when I look through my old collections, his experiences still feel a little like mine. These days I’m not too far off from finally catching up with Andy, the forty-two year-old mother who not only shares my name but also my career path in writing. My last stop will be with forty-five year-old Roger, who shares not only my occasional well-meaning clumsiness with life but also my thinning hair (double what). Both of them take on parenting their idiosyncratic children with a lot of love, and though they sometimes wrestle with how to understand their kids’ needs, personalities, and dreams they try their best to help each of them self-actualize. And as the prospect of starting a family starts to rise over my horizon (quintuple what), that’s the theme I hope to carry along with me.

Though it sometimes fell into using stereotypes like nerd culture and Paige’s penchant for shopping, I forgive FoxTrot because it also blended in some pleasant surprises, including Peter’s girlfriend Denise, who is blind, and Jason’s aforementioned best friend Marcus, a person of color. Plus, their pet iguana Quincy is so adorable, how can you not forgive them for pretty much anything?

Through books, we have the opportunity to sit around the kitchen table with lots of different families, and I’m sure you have found a couple literary tables of your own to cozy up to. We grow older and they stay frozen, and it’s fun and it’s crazy to check in with them from time to time.