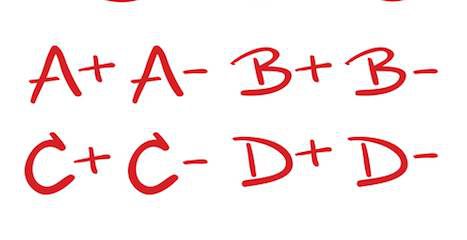 I kind of hate giving books star ratings on Goodreads. I do it now and then, mostly because it’s a quick way of giving feedback on a book when I don’t have time to review it with words. But I’ve always felt conflicted about it. It wasn’t until recently, when Lit Hub revealed its new site Book Marks, that I realized how strongly I feel about rating books, whether it’s with stars or grades or rotten tomatoes or hot tamales or whatever. I really, really don’t like it.

The idea behind Book Marks (the ins and outs of which Book Riot has covered) is that their staff will scour the web for reviews by book critics, assign those reviews a grade, and then average all the reviews for a composite grade, which is the one the public will see. This is what it looks like when you first land on the site: 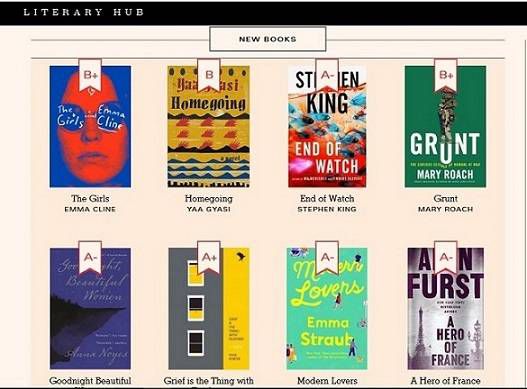 This strikes me as all kinds of wrong. I’m not quibbling with any particular grade here (although plenty of readers will want to quibble), but the site presents these grades as definitive judgments on each book, as though quality has been decided, debate is over, and we can all go home. It’s true that when you click on particular books, you will find snippets of reviews and links to the original full-length pieces, and you will be able to comment on books, make suggestions, submit your own reviews, and generally be a part of things.

But this is not the first impression you get. Instead, the site implies that reviews can be summed up into grades, and that averaging a bunch of grades from established critics leads to a meaningful statement about the quality of a book. Now, full disclosure: I’ve written some reviews that appear on the site. I’m one of those “established critics” whose ideas are supposed to lead to a grade that is supposed to have meaning for readers. But I just can’t believe this is actually a meaningful process. I didn’t assign a grade to the books I reviewed; someone else did. Someone else chose which reviews “counted” for their site, the reviews that got averaged with mine. And then the site did the averaging and presented the grade to readers as a done deal, the “conclusion” the critics came to.

But, but, but! The rating method at Book Marks is different than the rating method at Goodreads – one comes from established reviewers (whatever that means) and the other comes from general readers (there is overlap here) – but ultimately both sites do the same thing: rate and rank books, assigning them value using a very simple system. Grades, stars, whatever. Both methods are unsatisfactory.

Now, let me hasten to say that if you love rating books, I’m not judging you. You may have a system for assessing books that works for you, and that’s great. Your mind is probably a more orderly place than mine. But I don’t have a system, and I don’t think I want one. When I write a review, I try to capture as much nuance and complexity about a book as I can, which is the opposite of giving a grade. When I try to assign a certain number of stars on Goodreads, I’m left with questions like these:

There are other questions along these lines, and you can probably add a bunch of your own. These are questions that can be explored in writing, but that stars just don’t capture. Of course, on Goodreads it’s possible to write a review explaining the reasoning behind a star rating, but the problem is that the stars take on a meaning of their own, separate from a written review. They become part of a book’s average rating, which doesn’t take written reviews into account, and they also just stand out more than words do. If Goodreads users are scanning a book quickly, chances are they will look at the stars and not stop to read the review carefully. And the same problem exists with Book Marks as well: yes, written reviews are available, but the grade is what stands out.

In the end, I’m not trying to persuade people to stop assigning stars or rating books in whatever way they rate them. People should interact with books however they want to. But I think it’s valuable to take a step back from ratings and consider how flawed and oversimplified they are. I’ll take my books messy and complicated, please. I think I’ll stop assigning stars on Goodreads entirely. And I doubt I’ll ever use Book Marks to figure out whether I want to read a book or not.