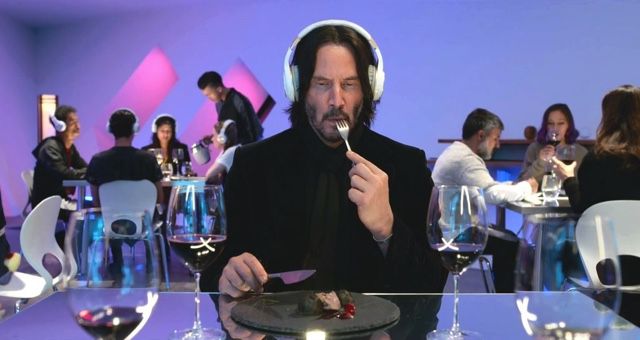 Keanu Reeves is no stranger to bookish roles; he has, by my count, been in 18 movies that are based on books, short stories, and plays. But what about the roles that he didn’t play, but should have? Let us continue our celebration of the Keanu Reevaissance by traveling through time and space to imagine the bookish roles Keanu didn’t play (but we really wish he had played, so let’s pretend).

What if, instead of (or in addition to) these famous roles he did play, he had also been cast in a few additional bookish roles? Join me, if you will, on an adventure through time, space, and our imaginations.

No, the book wasn’t published until 2015. Do not trouble me with details! We are traveling through time and space! Somebody get Keanu a haircut, probably. (I still haven’t read this one. I know, I know.)

This is the would-be casting that inspired this whole post. Imagine, if you will, that Marvel had somehow, miraculously, pulled their heads out of their asses and cast an Asian American (or, in this case, Asian Canadian) as Danny Rand, the privileged young man who becomes the legendary Iron Fist. Imagine.

Keanu Reeves as Dara in The City of Brass by S.A. Chakraborty

Okay, I still haven’t read this book either (I know!) but my understanding is that Dara is the love interest, kind of, and is also a 1000-year-old warrior. Sounds perfect (even if Jonathan Harker didn’t end up a vampire).

Keanu Reeves as Heathcliff in Wuthering Heights by Emily Brontë

Keanu Reeves as Nate in Heroine Complex by Sarah Kuhn

Keanu as a hulking half-demon? WHY NOT. He was certainly bulked up to play Jack Traven at the time. He may not be quite 6’4 but he’s tall enough.

It! Could! Work! **faints** Seriously, though, we know from his portrayal of Paul in this movie that he can do period pieces if they aren’t Dracula (don’t @ me, he was terrible and so was my other true love, Winona). Why not an Austen rogue?

Keanu Reeves as Marko in Saga by Brian K. Vaughan and Fiona Staples

Let’s just cover up Keanu’s worst haircut ever with some horns, shall we? And take away that gun; Marko is a pacifist.

Listen. We are traveling through time and space here. I don’t have to justify this as bookish, but if I did, Star Wars: A New Dawn is a prequel to Star Wars: Rebels, taking place seven years before the show begins. (This, of course, would make Matrix-era Keanu too old to play book Kanan, who is 32 in his last Rebels appearance, but I already asked you not to trouble me with details.)

Keanu Reeves as Black Bolt in The Inhumans and Black Bolt

Is this kiiiinda the same character as John Constantine? No, but also a little bit yes. Should a character who cannot speak be played by an actor who can? I don’t know. Black Bolt can speak and chooses not to (because catastrophic things happen when he does), so maybe?

Keanu Reeves as Michael in So Sweet by Rebekah Weatherspoon

We have it straight from the author’s mouth that this is dream casting. No need to time travel! Somebody greenlight this baby!