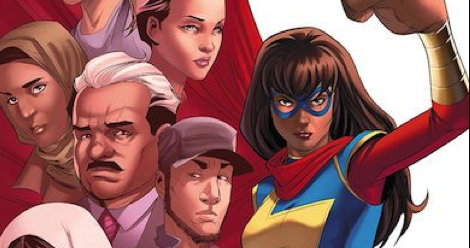 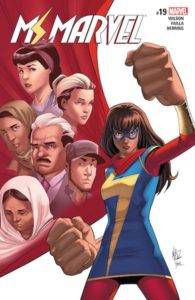 By now, most of the comics-reading populace has fallen head over heels for Ms. Marvel. Kamala Khan burst onto the scene in 2014 and won the hearts of the four-color crowd with her courage, unbridled passion for all things geeky, and genuine joy in being a superhero. But lots of characters have auspicious debuts. The amazing thing about Ms. Marvel is that somehow it just keeps getting better.

One of the things that makes Ms. Marvel so special is its deft handling of contemporary social issues. Kamala’s adventures always feel like they speak to the times we’re living in, while never coming off as clumsily “ripped from the headlines,” and the characters never stop acting like themselves just to make a political point. In the past year or so, Kamala’s confronted gentrification, doxxing and cyberbullying, and police profiling and predictive justice. But the last few issues still took my breath away.

In the most recently completed storyline, “Mecca” (issues #19-22, by G. Willow Wilson, Marco Failla, Ian Herring, VC’s Joe Caramagna, and Travis Lanham, with covers by Nelson Blake II and Rachelle Rosenberg), Kamala discovers that one of her old enemies, Chuck Worthy of HYDRA, has managed to become mayor in a sketchy closed-door coup—and he’s hired another of Kamala’s former foes, Lockdown, to form a new task force: Keepers of Integration, Normalization, and Deference, or K.I.N.D. Through K.I.N.D., Worthy and Lockdown have empowered random, untrained Jersey City dwellers with a bone to pick to, as they put it: “…make sure everybody in Jersey City is somebody who’s supposed to be here…[a]nd that everybody who’s supposed to be here understands and respects our societal norms.”

In other words, they’re after anyone who looks different, Marvel-style: mutants and Inhumans. Kamala, of course, is an Inhuman, but it’s her brother Aamir who gets arrested while carrying a slow cooker full of biryani to the neighbors. 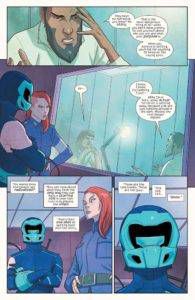 I’ve read many, many comics that like to draw this kind of metaphor without calling it exactly what it is (I mean…that’s sort of the X-Men in a nutshell a lot of the time), but Ms. Marvel doesn’t do that. It’s not a coincidence that Aamir, who is brown and visibly Muslim and wears traditional dress, is arrested while carrying what I.C.E.—oh, sorry, I mean K.I.N.D.—thinks is a pressure cooker. Even Aamir thinks he’s been arrested because of his religion and ethnicity, since he only manifested powers once, under duress, and isn’t anything like a practicing superhero.

Meanwhile, Ms. Marvel is fighting Lockdown’s new minion/ally, Discord, who seems to know all of her weaknesses, both physical and emotional. This is explained when Discord turns out to be none other than her friend Josh, a supporting character who’s been kicking around in the background of Kamala’s adventures from the very beginning.

Kamala is devastated by this. She and Josh have never been close, but she’s known him her whole life, and here he is targeting her. Targeting people who look like her. 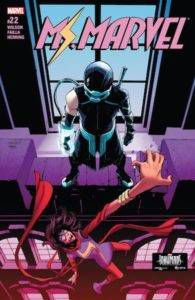 She tearfully asks him how he could do something like this, and Josh explains how isolated and disenfranchised he’s felt lately: “I was sick of being told how lucky I was and how fortunate I was and how easy I had things. If I have it so great in life, why do I feel like this? Why do I feel like this all the time?” He wasn’t sure who he was, the comic explains, so he defined himself by who he wasn’t; by who he could hate.

For a lot of us in the States, the past year has felt a lot like what Kamala goes through in this story. We pull away the masks on the people shouting ugly things at us and we find our friends, our coworkers, even our relatives.

And the use of Josh in this role is no more coincidental than Aamir was. He’s always been the most privileged member of the Ms. Marvel cast: white, male, straight, cis, and Christian—a popular blond jock. The series has never explored his inner life, not when he was mistakenly arrested or when his girlfriend broke up with him because she realized she was gay. He’s always just been in the background, filling up the ranks.

For most of the history of superhero comics, Josh would have been the hero, while Kamala would have been lucky to appear as a member of his supporting cast (and probably not before the mid-90s at the earliest). Now he’s faced with his lack of centrality-by-default, and he’s angry and confused by it. “It’s like you were this big hero, this symbol, for everybody but me,” Josh says, voicing the frustrations of those who see representation and inclusion for everyone as something being taken away from them personally. When you’re struggling—in whatever way that might be—being told you have privilege is infuriating. 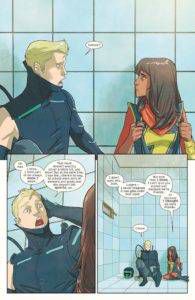 It’s a portrayal of an angry, frustrated young white man who feels disenfranchised that is drawn with compassion, but not with sympathy. The story understands what brought Josh to this point, and never stops painting it as human—but it stops short of ever suggesting anything he does for K.I.N.D. is acceptable or justified. “You don’t get to throw people in the back of a truck just because you don’t like the way they look,” Kamala snaps at one point, before liberating a bunch of illegally-seized mutants and Inhumans. Everyone feels frustrated and misunderstood at some point, especially young people, and that’s fine. Taking it out on others is where Ms. Marvel draws the line.

It’s a timeless story—young people everywhere have felt lost and angry since we climbed down from the trees—and yet specifically, heartbreakingly timely. Who among us hasn’t encountered a Josh on social media—or worse, across the table at Thanksgiving dinner—over the past year?

And as if that wasn’t enough effortless virtuosity for Wilson, Failla, et al., they still take time to have Aamir point out that the common thread behind terrorist attacks is not race or religion but a history of committing domestic abuse. And to give Kamala’s best friend Nakia and her sister-in-law Tyesha—both hijabi—a nuanced, complicated discussion about their very different reasons for wearing the hijab. And Lockjaw shows up! The best puppy in the world!

Kamala ends the story by defeating the bad guys (for now), but she still feels depressed, uncertain, and lost—again, something I think a lot of us can relate to even after triumphant elections like this November’s. But she still gives us a quote to carry with us when things seem dark:

“Outcomes are never certain. The good guys don’t always win. But one thing is certain—even if you can only do the littlest bit of good, you have to keep going. Because that little bit of good may save someone’s life.”

Thanks, Kamala. I can’t wait for your next story.