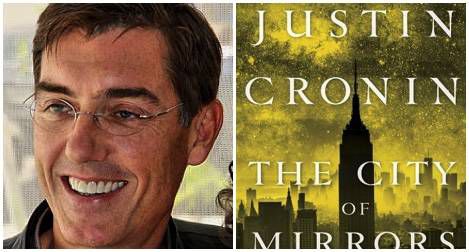 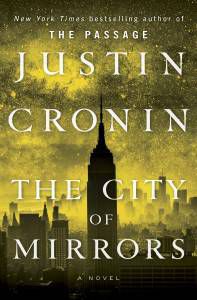 Justin Cronin has spent a few weeks on the road, promoting his newest novel, The City of Mirrors. It’s the last in the trilogy that started with The Passage, and it ties up all (well, most) of the loose ends nicely. He’s spent a lot of time answering questions about plot points and telling the story of how the story came to be.

When I spoke to Cronin, we didn’t just talk about The City of Mirrors. We did discuss it, and I relayed my distaste for one of the characters who dominates the narrative. Zero is a frustrating, albeit necessary, character. Don’t worry. That’s all I have to say about the book. No spoilers here.

According to the news that surrounded the release of The Passage in 2010, Fox 2000 and Ridley Scott’s production company had purchased the rights and a film was “in development.” A movie is no longer in the works. Cronin tells us that, instead, plans are being made for a TV series. Details are not yet available, but for a story that is this complex and rich with detail, television definitely seems the way to go.

“Television now is a great medium. There are so many good shows. Writers took over television at some point, starting with The Sopranos which showed people that television could be kind of novelistic and that there was an appetite for it.”

The series is complete. It’s coming to TV. All that’s left is finishing up the book tour, and Cronin can call that adventure done.

Over the last 18 months or so, Cronin has taken on a different sort of project. He’s been introducing his 13-year-old son to the “touchstone science fiction” of his youth. This was encouraged, partly, by a discussion they had after watching the latest installment of the Star Wars franchise, which they both felt was…lacking. This led Cronin to give his son the science fiction novels he’d grown up with – Heinlein, Asimov, Clarke, Bradbury – and to watch the shows that he’d watched as a kid.

“We watched every single episode of the original Star Trek, every night, one episode after dinner, all the seasons in order. He loved it. He enjoyed it enormously. Even though it’s pretty clear that the sets are made of plywood and there are no special effects. Essentially, they’re all unspecial effects. But he loved it. Every time Kirk made out with an alien chick, we’d take a shot of root beer.”

The experience was such a rewarding one for the both of them, that they decided to do it again. On a recent vacation, they binge watched The Expanse on Syfy, and when they were done, they decided to read the books together. Because summer activities like the book tour and summer camp will keep them from spending a lot of time together, they’re reading the books and discussing them over the phone, as a sort a “Dad/Son SciFi Bookclub.”

This book club may have taken his reading in a different direction than it has headed in recent years, but it’s a welcome break. That doesn’t mean he hasn’t kept up with his favorites. He makes a point of getting early copies of anything by Alan Furst, an author that Cronin says “can’t write a bad sentence.” Furst’s latest, A Hero of France, comes highly recommended.

There is another book in the works, but it’s not something Cronin is ready to talk about. His immediate (well, after the tour) plans involve a as many naps as he can squeeze in, a vacation or two, and a temporary return to teaching. Students at Rice University will have a chance to take a class from Cronin in Spring 2017. It’s been a few years since he’s taught a class, but he hasn’t been able to shake his academic habits.

“One thing that audiences don’t do is, and there’s no time for it, ask about some of the literary references in the book, the Easter eggs. I like talking about the book’s relationship to other books…I have the English professor’s desire to tear apart my own work. And to watch others do it and see what they come up with.”

It’s something that does happen on Twitter, though, when readers will mark a passage, take a picture of it, and ask about the reference. he’s always quick with an answer.

@jccronin What’s the V-word that was used in connection with Jonas (p. 160)? pic.twitter.com/oI9SsFGxUn

His answer to my final question is the type of answer only an English professor would give. His required reading, his desert island book? The Riverside Shakespeare.

“All the sonnets. The bad plays. It’s all there. It sounds like a real high-falutin answer, but that book is all books. Every kind of story is in there. Every possible invented use of language. It’s everything. Every kind of character. Every story ever told can be found within those pages.”

Sounds like he’s got some professorial urges to get out of his system.