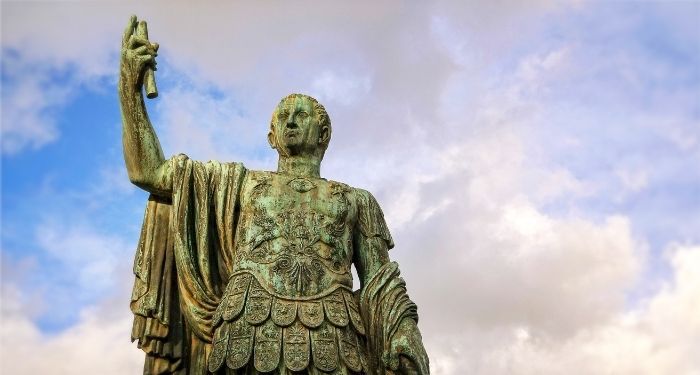 Quick! Name a historical figure from 2,000 years ago whose likeness also appears on a pizza box. Julius Caesar. The answer is Julius Caesar. March 15, or the Ides of March, is Julius Caesar’s stabbing anniversary. RIP, buddy.  Dictatorship, apparently, isn’t all it’s cracked up to be.

Caesar has made regular appearances in literature and media. From Dante’s Inferno to Gretchen’s harried essay in Mean Girls, Julius Caesar has become somewhat of a folk character.

When Shakespeare’s The Tragedy of Julius Caesar is performed, small revisions are often made by the director to stir up comparison between the text and contemporary politics. A prime example is Orson Welles’s 1937 adaptation, Caesar. Welles used a bare stage, modern military dress, and sharp lighting cues, all of which evoked comparison to fascist Italy and Nazi Germany. It is nearly impossible to read contemporary fiction about Ancient Rome and Julius Caesar without drawing comparison to current political climate.

What we know of the real Julius Caesar is minimal. We know about his conquests, his successes, and failures. We know about his death. We have his writings. The rest — his personality, his  childhood, and private thoughts — are open to interpretation. The historical fiction and political thriller authors in the building rejoiced!

Before we look at some of the modern/contemporary fictional representations of Julius Caesar, it’s important to note that almost all of these books were written by white men. I strive to read diversely, especially about historical eras and famous figures, but sometimes the books just haven’t been written yet.

Lace up your gladiator sandals from 2012 and step back in time; we’re reading up on Julius Caesar!

The Ides of March by Thornton Wilder

If juicy gossip and letters are your thing, this epistolary novel is your kind of book. Wilder’s Julius Caesar is magnetic and brilliant, with the sights and sounds of Ancient Rome made impossibly real. First published in 1948, this novel remains fresh. 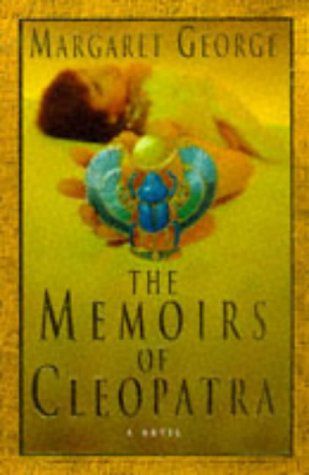 Within the pages of this epic personal history of Egypt’s most infamous Queen, Julius Caesar appears as Cleopatra’s ally, lover, and political equal. This expansive novel comprises of Cleopatra’s life from golden childhood to her life alongside Julius Caesar, through his assassination , and up until her own death. George’s portrait of Caesar is intelligent, powerful, and romantic.

The first two installments of this seven book series provide a political background, as the Roman empire rises. In book three, Fortune’s Favorites, we meet Julius Caesar as an ambitious young boy. McCullough explores his most famous exploits as a solider. This monster of a series is a must-read for the history and political science enthusiasts. 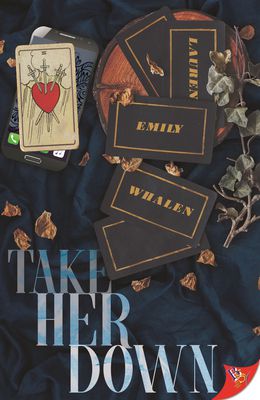 In this queer  YA retelling of Shakespeare’s Julius Caesar, the stakes are high and the emotions are higher in the cutthroat world of Augustus Magnet School. Ex–best friends Jude and Bronwyn are running against each other for class president. Bronwyn’s reputation needs the boost, after family troubles and public ostracism. After Bronwyn’s smear campaign goes viral, Jude goes missing. Can Bronwyn regain her status or is it too late?

In this long-running French comic book series, Gaulish warrior Asterix battles against the Roman Republic, while also having fantastical adventures around the world. The comic book version of Julius Caesar made his first appearance in July 1959. Caesar is the main antagonist of the series, with his plans to finally sack Asterix’s village always failing. The Asterix version of Julius Caesar is a clumsy oaf, often causing embarrassment to the Senate. However, he is shown as honorable, granting favors to Asterix and other warriors. Julius Caesar’s appearance is based on Ancient Roman coins. 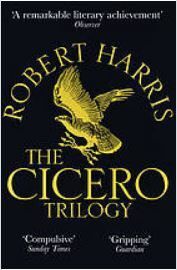 The Cicero Trilogy by Robert Harris

Told from the perspective of Senator Cicero’s enslaved secretary Tiro, this series showcases Julius Caesar’s Rome in magnificent detail. Cicero’s fierce ambition combined with Tiro’s keen intelligence pushes Cicero to the top as Rome, and Caesar’s reign begin to collapse. The third book in the series, Dictator, is a political thriller, and stands alone as a novel.

The Young Caesar by Rex Warner

The night before his assassination, Warner’s Caesar recalls his youth — early conquests, and bitter losses. See Rome through Caesar’s memories in this biographical novel. 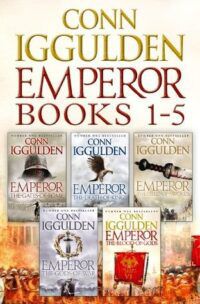 The Emperor Series by Conn Iggulden

Gritty and adventurous, this five book series explores Julius Caesar’s life from boyhood until death. Iggulden’s prose is bold, weaving historical significance with detailed action. This is the series for adventure seekers!

Not done in Ancient Rome? Check out these six books about Rome while you slurp up some spaghetti. 100 Must Read Books About Ancient History  provides more insight to the ancient world. Happy reading, and always listen to the soothsayers!