I’ve talked about shojo manga, but there’s more than just shojo. The show(jo) must go on as girls become women, and continue to love comics. The next progression in the Japanese manga demographics is josei. There are tons of josei mangaka I could highlight here—like Moyoco Anno (wife of Hideaki Anno, yes the Evangelion guy!) or Kyoko Okazaki—and many manga I could spotlight—like Honey and Clover, Bunny Drop, Chihayafuru, or Princess Jellyfish. From the range of titles, josei is not just about women characters, but comics that, generally, women would enjoy. The woman who’s just entered college and, like Honey and Clover’s Takemoto, is unsure of the direction of their life. The woman finding parallels in her life and that of Bunny Drop’s Daikichi. The woman who, like Princess Jellyfish’s Tsukimi, is just a little stranger than the rest.

But I digress. I’m here, as you might have guessed form the title, to talk about Ai Yazawa, specifically her two manga that have been published in English: Paradise Kiss and Nana.

Paradise Kiss has had a bit of an interesting publication history; it was released in its entirety twice, once by Tokyopop in five volumes and then again by Vertical in three. Neither version, to my knowledge, did gangbusters, but it is certainly a pleasure to read. Utilizing Yazawa’s own background in fashion, it follows a group of students—dubbed Paradise Kiss or ParaKiss—who are all fashion students, just wanting to create pretty clothes for all sorts, main character Yukari Hayasaka especially. And stuck in the life of high school mediocrity and having an love unrequited in her heart, Yukari finds herself drawn to the ParaKiss’s odd cast of characters.

I don’t know if Paradise Kiss will—at least in my mind—surpass Honey and Clover as the pinnacle find-yourself-in-college manga, but that has to do with circumstance and time I read it as much as anything else. It also doesn’t help that I probably wouldn’t have picked up Paradise Kiss at all were it not for my love for Yazawa’s next manga, Nana.

In English, Nana is printed by Viz Media under its Shojo Beat imprint, which is their catch-all label for comics for women of any age even though it’s called SHOJO Beat…look, just don’t question it because they’re printing a lot of amazing comics, Nana tragically not among them (at least printing new volumes) for reasons of Yazawa’s own health rather than sales. 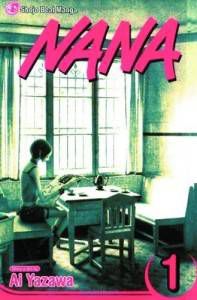 Nana, in the same vein as Paradise Kiss, features well-dressed characters (that’s where the sweeping similarities end) Nana Osaki and Nana Komatsu as they have a chance encounter on a train and end up living in the same Tokyo apartment, on the seventh floor of a building with no elevator in apartment 707 (nana means seven in Japanese, so puns! Or wordplay…Just go with it!).

And Nana, like Honey and Clover, is where my heart lies when it comes to josei manga. This is the story of a struggling musician (Nana Osaki) who has shunned her former, and now-rock star, boyfriend Ren and is trying to find her own niche in music, and of a woman chasing love wherever it leads her (Nana Komatsu).

Nana does shy away from any topic. Nana O talks with Ren about having to take the pill because they can’t afford a child; Ren counters that he’d quit music and work hard labor just to provide for the both of them. Ren, a child abandoned, would like nothing more than a family. Nana O, abandoned by her mother to the care of her grandmother, clings to those around her in her heart so she never loses them, even if they’re gone from her physically. It’s why her sort of father-daughter relationship with Yasu, her band’s drummer, comes from.

Nana K, nicknamed Hachi after the hachiko dog and because that’s Japanese for the number eight, chases her then-boyfriend (after her teacher in high school, after the video store guy, after the married man Takashi Asano…) Shoji to Tokyo just to be with him after a year of studying. She finds, inexplicably, the boys that would cause her the most pain. “Growing up,” as the opening monologue describes, “surrounded by mountains… the middle of three daughters,” Nana is the one with the most stable home life, yet she finds adulthood the hardest because she just wants to find love when love is something you work for.

Ai Yazawa heralded a new manga era in my life, manga that included josei, and I’m better off for it. As gateway josei manga go, Nana and Paradise Kiss are as good a place to start as any, and both are still in print, which is a bonus. Your mileage may vary, but any of the above manga I just suggested would be great starting points. Plus they’re funny.