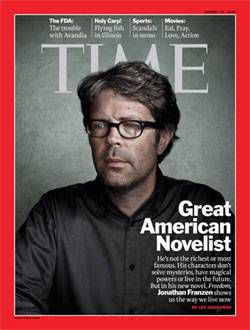 As this week has proven to us all, Jonathan Franzen is a crazy old man who lives in a box under the overpass. Or something. Anyway, he hates a lot of stuff, and people on the internet seem to like writing about all the stuff he hates including, somewhat ironically, the internet. But here at Book Riot we get the best scoops, and I’ve actually found the diary that Jonathan Franzen has kept throughout the development of human history (no, seriously: he’s actually an unaging oracle-type figure of bitching about stuff). Here are some of my favourite entries:

October 4, 2400 BC: I know the date probably looks weird, but I just invented a new calendar. I think it’ll catch on. Anyway! Word out of Egypt is that they’re ditching the clay tablets and turning to papyrus. No, seriously! Apparently people like it because it’s easier to transport and you can write longer texts. While the idea of having more of my words committed to the annals of time appeals to me enormously, I really think significant ideas like mine deserve a significant medium like the clay tablet. I want you to have the visceral experience of carrying my tablets around. If you shatter your pelvis, good.  That’s part of the experience, and I think serious people understand that.

July 29, 377: Been hearing about all these libraries in Rome. Apparently, all the writers have to put copies of their writing in this one building where other people can go in and access them. What. I mean, I don’t know that the person coming across what I’ve written is going to be sufficiently serious-minded to be worthy of the experience of reading me. In theory it all sounds fine until you consider that people might then choose to discuss my work in some kind of popular space, and I promise you I am going to be against that FOREVER.

March 12, 1455: Just got back from checking out Gutenberg’s Bible. I do not see what all the fuss is about. I guess it’s fine for a popular writer like God, but I have a hard time seeing how any serious writer would be interested in distributing his work to the masses. I almost said his or her work! Hilarious, 1455 Franzen. Anywho, as I was saying. It all makes literature a bit too accessible for me, thanks. I think serious books are scribed by monks and that is that.

November 13, 1809: So there’s word coming out of England that some guy named Bartholomew Folsch has been granted a patent for a pen with an ink reservoir. Really, Bart? We’re going to just keep on making it easier for lazy people to express themselves? Writing is done with a quill dipped in ink. That’s it. That’s how writing is done. I find it supremely hard to believe that any person could create a brilliant work of art from this “pen” with its “reservoir.” You’re on my list, Bart.

July 15, 1926: Those chuckleheads at WEAF (what does that even mean?!), a radio station in New York, want me to come on the air and read from one of my brilliant masterworks. Really. Like I’m going to get involved in this flash-in-the-pan malarky. It’s just people talking. If I want to listen to people talk, I will pay someone to repeat my thoughts to me aloud. I think we can all agree no serious conversation will ever occur in this new medium of “radio.” These fads today. People must be getting dumber.