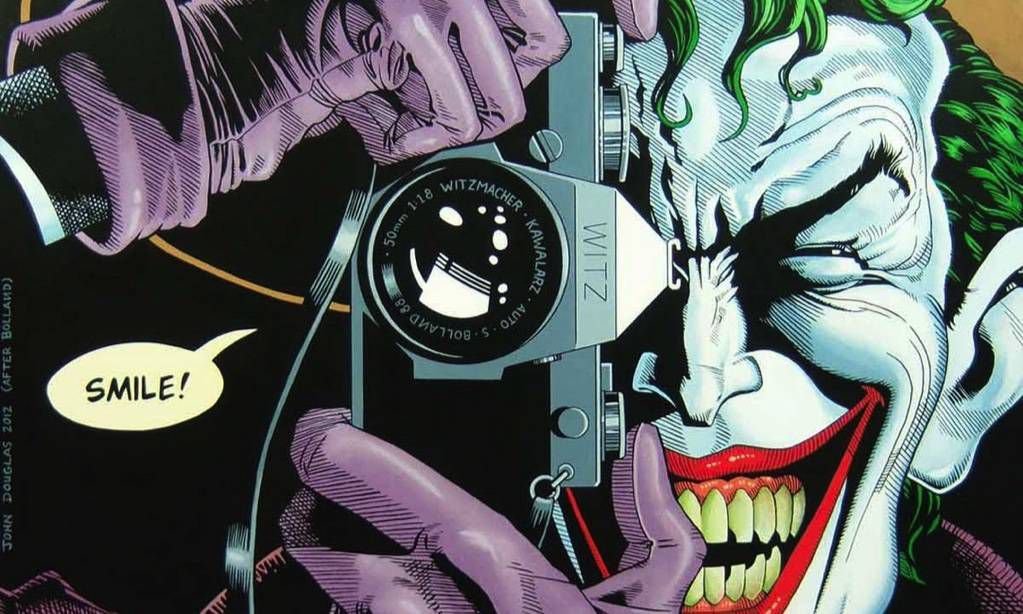 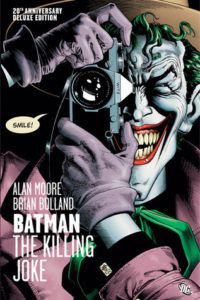 I posted a Facebook link to a Slate article about DC’s upcoming The Killing Joke cartoon, along with a snide comment about the success of DC’s animated versions versus live action films and how children need Alan Moore’s take on reality, and my one friend who enjoys arguing about everything posted quotes from Moore about the book’s pointlessness.

“[I]t isn’t about anything that you’re ever going to encounter in real life,” Moore said, years after The Killing Joke became recognized as one of the best Batman stories ever told, “because Batman and the Joker are not like any human beings that have ever lived. So there’s no important human information being imparted.”

I disagree, based on the importance the Bible, Greek mythology, Norse Mythology, and Coyote trickster tales have in our culture. If stories about gods weren’t meaningful to humans, we wouldn’t have theater, but far be it from me to pick a fight with Alan Moore or with that guy whose hobby is arguing about everything.

What I remembered best about The Killing Joke was the joke. It’s a very Alan Moore kind of joke, touching on the human construction of reality, the power of thought in the act of creation, and the way communication turns ideas into experiences, objects, and beliefs. How did it go, precisely? I didn’t own the book, so I Googled “Killing Joke Joke” in various iterations until I found a transcript. First, though, I found dozens of pages revealing that many people who adored the book didn’t get the joke. A lot of reviewers skip right over the joke.

See, there were these two guys in a lunatic asylum… and one night, one night they decide they don’t like living in an asylum any more. They decide they’re going to escape! So, like, they get up onto the roof, and there, just across this narrow gap, they see the rooftops of the town, stretching away in the moon light… stretching away to freedom. Now, the first guy, he jumps right across with no problem. But his friend, his friend didn’t dare make the leap. Y’see… Y’see, he’s afraid of falling. So then, the first guy has an idea… He says “Hey! I have my flashlight with me! I’ll shine it across the gap between the buildings. You can walk along the beam and join me!” B-but the second guy just shakes his head. He suh-says… He says “Wh-what do you think I am? Crazy? You’d turn it off when I was half way across!

Batman laughs because this joke illustrates his life, his struggle with the Joker, his identity as a superhero. Both characters exist in a fantasy. They may not be “not like any humans that ever lived” in their personal expression, but they are the perfect example of a shared delusion. They’ve created their world together. They both believe in the bridge of light, but Joker doesn’t believe in redemption, and inexplicably, Batman does.

More than ten years after he wrote The Killing Joke, Moore has Aleister Crowley tell an ideologically similar joke in Promethea Book 2, chapter 6. Two strangers, one of whom carries a box punched with air holes, share a railway carriage. The second stranger asks what’s in the box. The first stranger explains that it’s a mongoose he’s bringing to his mentally ill brother, who is plagued by visions of serpents.

“These snakes your brother sees…aren’t they imaginary snakes?” asks the second man.

“Indeed,” says the first, “but this…is an imaginary mongoose.”

According to Moore, if you understand this joke, you understand magic. The world, magic tells us, is precisely what we make it. What we believe, we manifest. There’s no sense in arguing about what exists; you fight delusion with delusion. Reality is psychosomatic.

One of the things that people love about The Killing Joke is that it offers an origin story for the Joker, who never gets a definitive origin story. Maybe that’s what’s so scary about him. The Joker is so insane, and so obsessed with driving other people nuts, and we don’t know why. And the book also focuses on the Joker’s idea that sanity is this tenuous, that we’re all “one bad day” away from becoming homicidal lunatics. Except, of course, Batman has “one bad day” and it turns him into Batman (lunatic, yes, homicidal, no) and, in the course of the story, Jim Gordon has “one bad day” and it strengthens his resolve to be Jim Gordon: “You have to go after him! I want him brought in…and I want him brought in by the book!”

The Killing Joke draws a very human Joker, and a very human Batman. Batman, terrified that the Joker’s antics will turn him homicidal, offers another way. “I could rehabilitate you,” Batman says. “You needn’t be alone.” This is the joke. Batman, teaching the Joker sanity, is like an escaped mental patient offering another escaped mental patient a bridge made out of light.

A lot of readers argue that the book ends with Batman killing the Joker, but I disagree. The joke’s not funny if Batman stops believing in the bridge. He says multiple times that he doesn’t want to hurt the Joker. He needs the Joker, to remind him who he is. To me, when Batman reaches for the Joker, they are sharing a human moment, acknowledging that they’re in this together. They could both be in Arkham Asylum; they could both be in the Bat Cave. But they’ve chosen sides. They’ve chosen identities.

Another thing this book does differently from a lot of Batman stories is acknowledge that Batman and the Joker not only need each other, but in fact, created each other. Joker becomes the Joker when he jumps into chemical waste to escape “that human bat guy, in all the papers lately.” Batman recognizes that his decades-long struggle with this criminal defines him. They’ve constructed their realities together as two men who oppose each other, much in the way that rebellious teenagers create identities based on the opposite of their parents’ values.