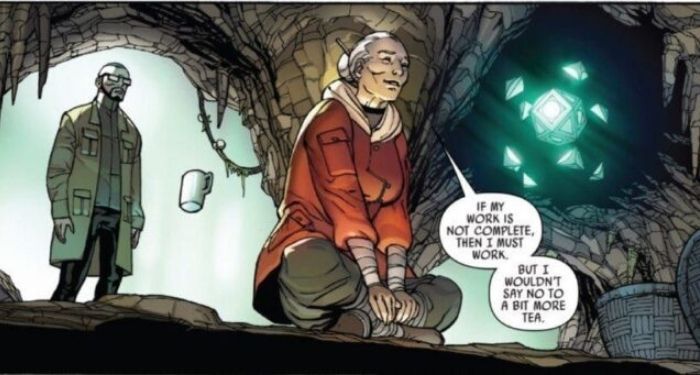 Jocasta Nu is the best of both worlds for us bookish people who also love Star Wars. I mean, who wouldn’t want to be a kick-ass Jedi AND a librarian that guards almost all the knowledge in the galaxy? I know I definitely would. But I have to say, I’m kinda disappointed that we know so little about her. The movies just tell us that she’s a librarian, and her official Star Wars profile is no more insightful. I have read comics with Jocasta Nu in them, so I know there’s more to her. Which is why I decided to take a dive and see — who is Jocasta Nu?

Small disclaimer before we start. All of us Star Wars fans know that one fateful day in 2014, Lucasfilm announced that its entire Extended Universe (EU) would no longer be canon. So, for the most part, I’m going to focus on Jocasta’s story inside this new canon. But if I mention any moments from the EU, I’ll let you know!

So without further ado, let’s go to a galaxy far, far away to meet Jocasta Nu.

Who Is Jocasta Nu?

Jocasta Nu is a Force-sensitive human trained as a Jedi. She served as their Chief Librarian in Coruscant during the last years of the Galactic Republic. Jocasta also belonged to the Jedi Council. As mentioned in the Star Wars: The Visual Encyclopedia, Jocasta is also a Consular Jedi — which means she dedicated herself to studying instead of fighting.

She takes great pride in her Archives, which is also one of her flaws. In Attack of the Clones she even tells Obi-Wan that if the planet Kamino isn’t in the Archives, then it doesn’t exist. And we know how that went. She also categorized Jedi as worthy and unworthy of education — which is a big nope and even led some students to the dark side, such as the Grand Inquisitor.

Little is known about Jocasta Nu’s backstory. But, like most Force-sensitive children, Jocasta was taken to the Jedi temple when she was young. She did well and became not just a Consular Jedi but a part of the Jedi High Council as well. She trained a few Padawans too, but she chose to pursue the path of archivist and became the Jedi’s Chief Librarian.

During her time in the Archives, she became close friends with Dooku, as referenced in Claudia Gray’s Master and Apprentice. She mainly helped other Jedi find information and guarded the Holocron Vault. She also appears several times in the animated show Clone Wars, most notably when the bounty hunter Cad Bane stole a holocron — and then to help Ashoka track down the thief who stole her own lightsaber.

Like all Jedi, Jocasta Nu is Force-sensitive and has demonstrated that she can use telekinesis to move objects around. She can also use the Jedi mind trick to get other people to do what she wants. Jocasta is an older Jedi, but she is still a Jedi. So she can fight with her trusty blue lightsaber, deflect bolts, and even jump several feet.

As far as physically skilled Jedis go, you could say she’s okay. But Jedi don’t solely rely on fighting/physical abilities. Being Chief Librarian, Jocasta has a wealth of knowledge — and a very sharp mind that allows her to remember a ton of information. Which is an invaluable skill that helped preserve the Jedi, for better or worse. Thanks to her knowledge, Luke Skywalker would be able to gather the information to create his own Jedi Academy after Return of the Jedi.

The End of Jocasta Nu

We’re heading into a major spoiler planet now — because I’m going to talk about the end of Jocasta Nu’s story in the Star Wars canon.

I’m just going to go ahead and say it. Jocasta Nu is dead. Both in the canon and the Extended Universe. In the EU, she doesn’t survive Order 66 — and she’s killed by Anakin in Coruscant. But not before she gave some important datachips to her Padawan so that he could escape. In the new canon, her story isn’t that different. But it is much more exciting, in my opinion.

When I read Darth Vader, issue #10 I was hooked from start to finish. Because it’s the story of Jocasta Nu’s death and her legacy. In this comic, Jocasta Nu is hiding after the Jedi purge. Remember when I said one of her biggest skills was her mind? Well, while in hiding Jocasta records dozens of holocrons that would help train new Jedi. She meant to create a school, but it didn’t have any students. So she set out on a daring mission to the old Jedi Temple in Coruscant. The idea was to find and retrieve a database with the names of every Force-sensitive child in the universe. But things didn’t go exactly as planned.

On her way out, she met the Grand Inquisitor. He was reading some of the files and tossing them aside. Jocasta, offended, confronted him. They launched into a big duel — which Jocasta lost. As the Inquisitor was about to deliver the killing blow, none other than Darth Vader saved her.

Vader was under strict orders to capture Jocasta alive in order to unlock the secrets of the Archive. They fought for a while, and Jocasta learned that Vader is Anakin Skywalker thanks to a droid. But she was outmatched. So, in a last desperate stand, she tried to kill herself by jumping off the side of the temple. But Vader used the Force to stop and capture her. She didn’t die then, but he killed her when she revealed his identity to a ship full of stormtroopers.

Or at least it appears so. Because while we see Vader ignite his lightsaber, we never see him strike the killing blow.

Want more Star Wars bookish content? Take a dive into our archives to find all sorts of quizzes, recommendations, and character profiles.