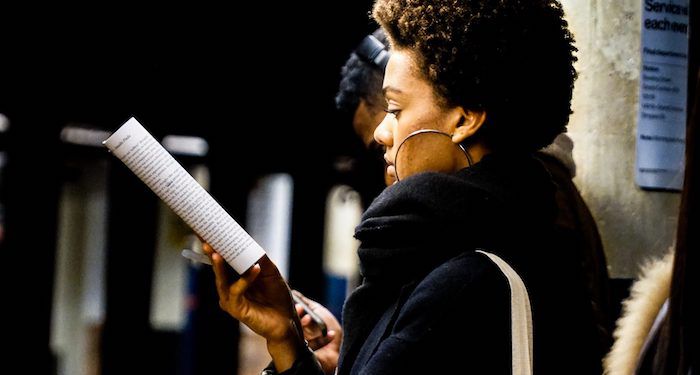 “I can remember now, with a clarity that makes the nerves in the back of my neck constrict, when New York began for me, but I cannot lay my finger upon the moment it ended…” I know, I know. Despite how iconic and amazing Didion is, that quote is pretty hackneyed. But the thing is, it’s representative of my relationship with NYC, including NYC-centric literature. I’ve lived in NYC at three different points in my life and each time, it was very different. Different, I expected. What I didn’t expect was to ever fall out of love with it, or at the very least, be ambivalent. Interestingly, my relationship with NYC-centric literature has been the same way.

The first time I lived in NYC, I was 22 and there for grad school. My move-in day was delayed a day or two because of the 2003 blackout — it wasn’t the most auspicious start. My first weekend there, I had dinner at the communal table at Angelica Kitchen, had a late night book browsing session at St. Mark’s, and went to the Guggenheim for the first time. My neighborhood was dotted with Tasti D-Lite (Pinkberry had not yet arrived), Kim’s Video and Music, Ollie’s, and Labyrinth Books. On weekends, I would pick a neighborhood to explore and leave my apartment early, the day wide open for me. The grad program wasn’t a good fit and I left after a year, but I had fallen in love with the city and was already planning my return.

After a summer-long practicum in the city for school in 2008, I knew I would come back one day. In 2011, I moved back — somewhat begrudgingly, though I wasn’t sure why — for grad school, shortly before Hurricane Irene. Again, not a great start. After living down south for four years, the differences were shocking. I had gotten used to walking down the sidewalk, smiling and making eye contact with people, and having conversations with cashiers, clerks, and fellow customers in line — and suddenly all of that was gone. Not just gone, it was purposely avoided. My first day of classes, it rained. When I got to the building, I was one of the last people to get into the elevator, and I made some sort of joke about something, which was met with absolute silence. Clearly I wasn’t in Carolina anymore.

In 2010, Chad Harbach wrote an article titled “MFA vs. NYC,” in the lit mag n+1 (excerpted on Slate). In it, he examined what he felt were the two American literary scenes: the NYC writing culture and the MFA program writing culture. He wrote about the ways they overlap and do not, the things they value, the status symbols in both, the writer and their behaviors in both, and cultural habits of the communities. I had read his article when in my own writing program, and found it entertaining and mostly true. His 2014 book by the same name, which included essays by writers with and without MFAs, commenting on programs, teaching, and the larger game of writing and publishing, was one I read in nearly one sitting, appreciating all of the questions brought up and ideas put forth.

I had loved Didion’s The Year of Magical Thinking, and when I read her essay “Goodbye to All That” in late 2011 several months into my writing program, I thought yes, exactly. Living in Manhattan at nearly 31 was very different than living in Manhattan at 22. I was living one street over from where I’d lived nine years prior, but the neighborhood had changed a bit. It was an odd sort of déjà vu, with a side of gentrification.

I stayed for four years, leaving in order to live near family when I became pregnant with my son. In that time, I did find pockets of solace — I often spent hours and hours at Strand and then working at a table at The Bean, sipping a dirty chai; I walked in new neighborhoods and explored all the falafel places I could. I had my favorite blocks, a favorite candy store, my favorite museums. Thinking about my time working at Bank Street Books still makes me nostalgic. But either the city had changed, or I had. Maybe both.

The two books Goodbye To All That (yes, a nod to Didion’s essay) and Never Can Say Goodbye came out when I was living in the city, and I tore through both of them. The former is a collection of essays about “loving and leaving” New York, and the latter is a book of essays about love for New York. But those descriptions are too pat, too dismissive, of what’s in these essays, which is probably why I love and relate to them. Feelings of isolation, financial struggles, real estate envy, finally making it your home — it all reminds me of what I loved about living there, and what I don’t miss; the inexplicable urge to defend the city while also being fed up with it at the same time. Wanting to leave, but at the same time, having the contradictory thought of maybe trying to find some sort of way to hold on.

Writing well about place can be tricky. Southern literature has a knack for establishing place as a sort of character in itself. I think writing well about cities is especially hard, particularly in fiction. Too overpowering and it just feels fake and overwhelming; too mild and it can feel blah. The worst is when it just doesn’t feel authentic. But when authors do it well, it transports us. Not just into the story, but into places like Maycomb, Alabama (Harper Lee); or late at night after closing time at the Met (E.L. Konigsburg); or Eatonville, Florida (Zora Neale Hurston).

When I lived in the city, I rarely read novels set there. When I left, at first I couldn’t get enough. It was like I wanted to remind myself of what I left, but only in an abstract sort of way. Now, I don’t miss it so much, but I also don’t read as many books set in NYC. I used to love the city, be at home in it; that slowly morphed into unease with it, and eventually, the need to leave. Now, I just feel wistful at times, and look forward to my next visit, whenever that may be.

I know some writers like to scoff at Didion’s popularity among writers, as if that diminishes her prose or intellect. While her essays and various observations about New York may be overly quoted or have become a shorthand of sorts, it doesn’t make them disposable. And just as her writing has meant different things to me at different times, so has New York and its literature — and all of these will stay with me in some way for the rest of my life.

If you’re interested in reading more books about New York City, check out this list of must-read NYC novels, and if you want to read more Joan Didion but aren’t sure where to start, this post about which book to read depending on what adventure you want is a good place to start!