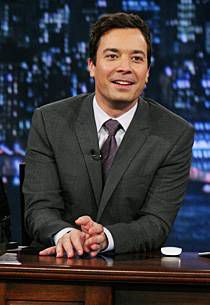 The title is not meant to suggest that Jimmy Fallon has a problem with the Audies. I don’t know if he does or not. I don’t even know if he knows what the Audies are. (Jimmy, if you’re reading this, the Audies are the audiobook industry’s award for the best audiobooks of the year.) What I do know is that he recently did another of his ‘Do Not Read’ segments, and it featured an audiobook. I also know that he says the books are all real, but I had my doubts about the audiobook he mentioned, Jitters: A Quirky Little Audiobook (see the whole list here).

Yeah, so Jitters is a real thing. More surprisingly, it is a real audiobook that won the “prestigious” 2011 Audie Award for “Best Multi-Voiced Performance.” I have only been an audiobook listener for about a year, so this is the first year that the Audies have even been on my radar. I have no idea what the criteria are or how legitimate the award actually is. I am taking part in the Armchair Audies, though, as a judge in the Original Work category (one that it seems Jitters would have been eligible for, too). If Jitters is supposed to be one of the best performances out there, then maybe I should ignore Jimmy’s advice and give it a listen?  You know, so I have an idea what to look for when I’m judging my category.

*Goes to listen to Jitters*

While you’re waiting, why not watch the trailer?

I should probably start by pointing out that this audiobook is not really a book. It’s more like a radio play. There is no print copy. It was written specifically to be an audio performance. Taking that into consideration, it shouldn’t really have qualified for Jimmy’s ‘Do Not Read’ list – technically speaking – but, if it were in print, then I would have to say that it most certainly should have been on it, if not at the top. Really. Don’t read it.

I am sure that there are many people out there who enjoyed the experience of listening to this book who wouldn’t have cared for it all that much had they tried to read it in print. There have been books that I listened to and enjoyed that I would have put down after the first few pages of reading in print. A great audio performance has the power to save an otherwise less-than-stellar reading experience. In this situation, however, Jitters has nothing to be compared to. There is nothing for it to be held up against, no way that I can say, “Well, at least the audio wasn’t that bad.”

I have to admit that I had trouble finishing this audio. The performances were a bit over the top for my taste, but for the story, that was perfectly appropriate. The story was what I found most off-putting. I’m all for implausible character combinations (see my genre kryptonite), but a shock jock that teams up with a one-armed reporter and a drag queen to save a mentally-challenged polygamist who eats pets is too much. I have a hard time imagining that it would have been published as a novel – by traditional means, anyway. I really think that audio was the only way it could have worked.

If Jitters were touted as an audio drama instead of an audiobook, maybe I wouldn’t have such high standards in terms of the actual storyline. This is why I am beginning to doubt the “prestige” associated with the Audies. It makes me wonder about the judging criteria. Is it based solely on performance, or does quality of the material count, too? In my way of thinking, they can be separated, but I don’t know that they should. Jitters was up against some pretty stiff competition in terms of content – Room, The Importance of Being Earnest, among others – so I’m really having a hard time understanding how this won the award.

In the match-up between Jimmy Fallon and the Audies, Jimmy wins. I can’t wait to see what makes it on his next ‘Do Not Read’ list.

P.S.  Kudos to the Jitters crew for having a sense of humor about being on Jimmy Fallon’s list. I hope you take this commentary in the same spirit.