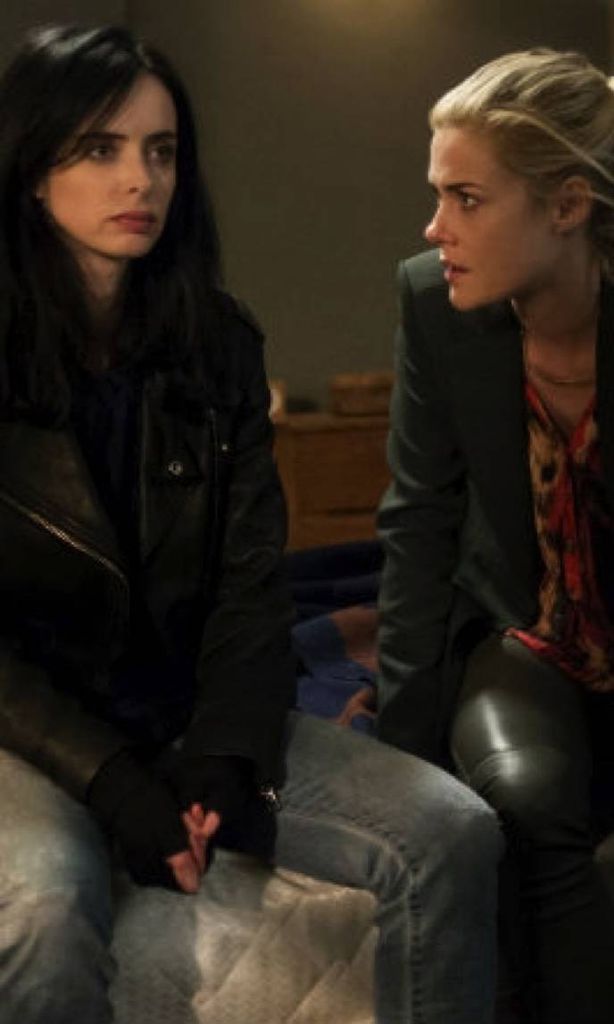 JESSICA: I’m still not the hero you wanted me to be.


TRISH: You’re exactly the hero I wanted you to be.

Jessica Jones is a show about a strong, complicated, fucked-up, semi-functioning woman.

In the second episode, Jessica comes to Jeri Hogarth and forces her to take Hope’s case. Later in that same episode, Trish does her hardest to protect Jessica, only to have Jessica say to her, “I can’t risk you.” These are things you do for the people you love in your life.

Every major female character on this show is protecting something.

Jessica: Protecting her loved ones and the innocent, constantly.

Jeri: Protecting her life and the things that she wants.

The flashbacks we see in Jessica Jones are largely about her relationship with Trish, which started with them protecting one another. Jessica gives up the secret of her power to stop Trish’s mom from physically abusing her. And even when she and Trish are adults, she goes after Mama Walker to reiterate threats, despite Jessica’s life being in danger from Killgrave.

Part of what’s great is that these women don’t necessarily need protection. But they need each other. And that’s not a weakness. It’s human. The writers trick us into thinking they’re writing Trish into an abusive relationship, only to find that she’s actually just training to be strong enough to fight for herself and for Jessica. Trish fights like hell when Killgrave sends Simpson to end her, and Jessica comes in as only a super-strong best friend can and saves her.

And afterward, when Trish has to deal with the trauma of being attacked in her home, she deals with it on her own. For better or for worse, she does not fall apart into hysterics. She does not give us any sort of trope-filled damsel in distress, broken victim. She’s affected, but she holds on to that gun and she saves herself. She’s vocal about what she wants and what she needs. Her relationship with Simpson is dictated on her terms… well, until he goes on his psycho binge. Her line, “Last night was fun, but that doesn’t mean I want your opinion.” gave me life. (A quick step aside to say that I think that this line resonated with a lot of people watching. Women are not often allowed to be seen as enjoying sex and then still be real people.) And later, without a moment’s hesitation, Trish sacrificed her body to save Jessica from Simpson by taking the red pill. Even if she’s not super, she’s a hellcat.

I had to throw all my story-instincts out the window. “Trish isn’t answering the phone when Jessica calls? So shitty.” Nope, actually, Trish is angry with herself for not being strong enough. Which is frustrating to watch, but also refreshing. And it was only frustrating because Trish is the one who can get through to Jessica. Refreshing because that is a best friend relationship. Painful honesty. “You have guilt and shame and it is clouding your judgement.” Trish says to Jessica. See? Painful honesty.

Jessica Jones as a show frequently subverts our expectations. Killgrave, the evil one, is the one who professes true love and the need to own and protect Jessica. Luke Cage is never once put in a position where he tells Jessica he’ll protect her, or not to worry because he’ll handle it.

Luke and Jessica have an exchange once he’s learned about Killgrave:

LUKE: You don’t have to do it alone.
JESSICA: Yeah, I do.
LUKE: Good for you.

No argument, just acceptance and support.

The most “protective” men on the show, Malcolm and Simpson, are both thwarted at every turn. Their attempts to take control of situations without the approval of the women whose lives they’re affecting are written as overbearing at best and violent and terrifying at worst.

Let’s talk about Hope for a moment. Hope is the most damsel in distress-y of the main women on the show, but Hope gets the award for willing to go the furthest to take back what’s hers. She hires a woman in prison to beat the hell out of her just to force an abortion. The writers do something here that I’ve never seen happen on a mainstream television show: They humanize this woman who was raped. They show her to us. And she is angry. “I won’t give life to this thing.” she says. Hope saves herself the only way she knows how, by taking action and not waiting for help.

And this isn’t about glorifying decisions made by these female characters, this is about the fact that this woman figured out how to have agency in a world where we’re rarely given any.

The show also disputes the idea that motherhood is the most good a woman can do. The three mothers we see for any length of time on the series are not shining examples. One is an overbearing, uber religious woman whose own son wants Jessica to kill him. Then we have Trish’s abusive mother. And lastly, we have Killgrave’s mother. Who inadvertently turns her son into a monster and then tries to kill him for the greater good.

Jeri Hogarth, despite turning into the most despicable, gives us a woman who would do anything she could to get her life to where she wants to be. She is cut throat. “The real world is not about happy endings, it’s about taking the life you have and fighting like hell to keep it.” She is selfish and awful, and trusting Killgrave was her and her loved one’s downfall, but she is still complex. Killgrave tells her to take him to a doctor she trusts and she goes to her estranged wife’s apartment. The same estranged wife that she’s attempting to get dirt on to force her to sign divorce papers. The same estranged wife she cheated on. The same estranged wife she probably still loves a little bit. Jeri has contradictory emotions, but she hides them and rationalizes away until she’s in a place where she can think clearly and coldly about what she needs to keep what she wants.