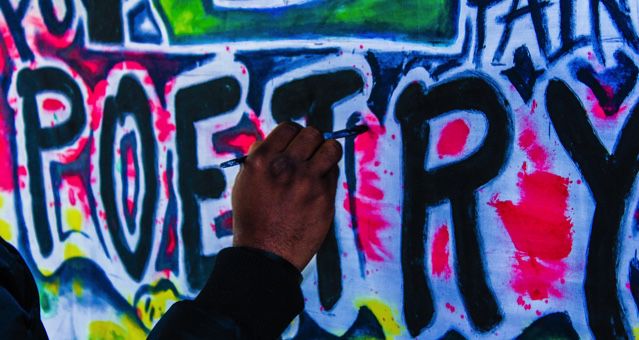 My first year living in New York City, I heard Jericho Brown recite at a poetry reading and got goosebumps. Jericho Brown poems are stunning. But there are so many other words to describe them: emotional, sexual, vulnerable. To borrow a sentiment from Walt Whitman, the poems contain the multitudes of his identity as a Black gay poet living in the American South. His words tell stories while making use of Christian references and allusions to ancient mythology. They feel both timely and universal—like most great art.

I could keep gushing, but I won’t. Because reading Jericho Brown’s poems will be infinitely more enriching than my descriptions of them.

They lie like stones and dare not shift. Even asleep, everyone hears in prison.


Dwayne Betts deserves more than this dry ink for his teenage years in prison.

In the film we keep watching, Nina takes Darius to a steppers ball.
Lovers hustle, slide, dip as if one of them has no brother in prison.

I dine with humans who think any book full of black characters is about race.

Check Your Shelf Newsletter
Sign up to receive Check Your Shelf, the Librarian's One-Stop Shop For News, Book Lists, And More.
Thank you for signing up! Keep an eye on your inbox.
By signing up you agree to our terms of use
A book full of white characters examines insanity near—but never in—prison.

His whole family made a barricade of their bodies at the door to room 403.
He died without the man he wanted. What use is love at home or in prison?

We saw police pull sharks out of the water just to watch them not breathe.


A brother meets members of his family as he passes the mirrors in prison.

Sundays, I washed and dried her clothes after he threw them into the yard.
In the novel I love, Brownfield kills his wife, only gets seven years in prison.

I don’t want to point my own sinful finger, so let’s use your clean one instead.
Some bright citizen reading this never considered a son’s short hair in prison.

In our house lived three men with one name, and all three fought or ran.
I left Nelson Demery III for Jericho Brown, a name I earned in prison.

I, too, know the science of building men
Out of fragments in little light
Where I’ll be damned if lightning don’t

Strike as I forget one
May have a thief’s thumb,

Another, a murderer’s arm,
And watch the men I’ve made leave
Like an idea I meant to write down,

God came to know the moment
Adam named animals and claimed
Eve, turning from heaven to her

As if she was his
To run. No word he said could be tamed.

No science. No design. Nothing taken
Gently into his hand or your hand or mine,
Nothing we erect is our own.

This is what our dying looks like.
You believe in the sun. I believe
I can’t love you. Always be closing,
Said our favorite professor before
He let the gun go off in his mouth.
I turned 29 the way any man turns
In his sleep, unaware of the earth
Moving beneath him, its plates in
Their places, a dated disagreement.
Let’s fight it out, baby. You have
Only so long left—a man turning
In his sleep—so I take a picture.
I won’t look at it, of course. It’s
His bad side, his Mr. Hyde, the hole
In a husband’s head, the O
Of his wife’s mouth. Every night,
I take a pill. Miss one, and I’m gone.
Miss two, and we’re through. Hotels
Bore me, unless I get a mountain view,
A room in which my cell won’t work,
And there’s nothing to do but see
The sun go down into the ground
That cradles us as any coffin can.

We want pictures of everything
Below your waist, and we want
Pictures of your waist. We can’t
Talk right now, but we will text you
Into coitus. All thumbs. All bi
Coastal and discreet and masculine
And muscular. No whites. Every
Body a top. We got a career
To think about. No face. We got
Kids to remember. No one over 29.
No one under 30. Our exes hurt us
Into hurting them. Disease free. No
Drugs. We like to get high with
The right person. You
Got a girl? Bring your boy.
We visiting. Room at the W.
Name’s D. Name’s J. We Deejay.
We Trey. We Troy. We Q. We not
Sending a face. Where should we
Go tonight? You coming through? Please
Know what a gym looks like. Not much
Time. No strings. No place, no
Face. Be clean. We haven’t met
Anyone here yet. Why is it so hard
To make friends? No games. You
Still coming through? Latinos only.
Blacks will do. We can take one right
Now. Text it to you. Be there next
Week. Be there in June. We not a phone
Person. We can host, but we won’t meet
Without a recent pic and a real name
And the sound of your deepest voice.

When you finish these five poems and inevitably want to read more Jericho Brown Poems, his newest book The Tradition 0r the collection The New Testament are both beautiful places to keep exploring this stunning language.