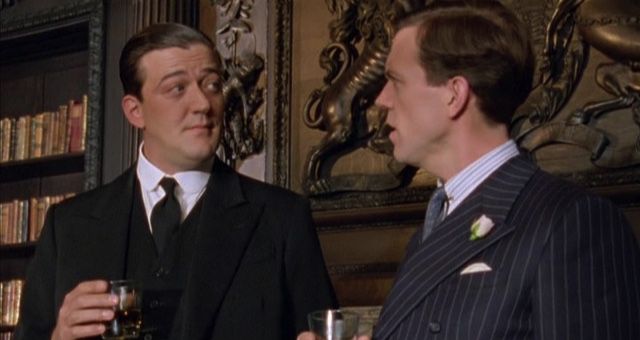 Obviously P.G. Wodehouse was never going to be beloved of egalitarians. Though immensely charming, his works are essentially nostalgic yearnings for a world of harmlessly genteel and likable aristocrats benefitting from inherited money and titles, employing a vast machinery of servants, and largely oblivious to the outside world (like those pesky world wars).

Sure, there’s a subversive bent to Wodehouse’s most famous creations: the dopey bachelor Bertie and the unflappable valet Jeeves. For Jeeves – as Bertie is constantly reminded, to comic effect – has a brilliant mind, and is much more capable than the feckless Bertie. It can be argued, though, that Jeeves’ contentment with being employed by such a nitwit is itself reassuring. Their relationship suggests that even the most talented and renowned of the working classes won’t rise up against the wealthy classes that have done nothing to earn or maintain that wealth.

So we can argue back and forth over how classist Wodehouse’s stories really are. Mostly, though, they steer clear of overt racism, generally because his world is lily-white. An exception is Thank You, Jeeves, because blackface is a key plot engine of this comic caper. 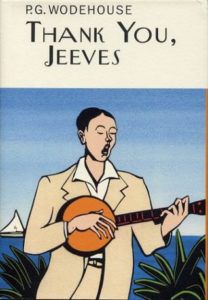 Thank You, Jeeves involves a typically intricate and silly stratagem to get out of a typically intricate and silly conundrum: Bertie’s been invited to dinner on a yacht owned by an American millionaire. They’re to be entertained by a group of black musicians. But the American first traps Bertie in a stateroom, holding him hostage to ensure that he’ll marry the millionaire’s daughter. Jeeves comes to Bertie’s rescue by encouraging him to apply boot polish to his face and pretend to be one of the musicians, so he can get the hell off the boat.

As Jeeves says in his typically deferential and understated manner, “I have a small tin of boot polish here, sir. I brought it with me in anticipation of this move. It would be a simple task to apply it to your face and hands in such a manner as to create the illusion, should you encounter Mr Stoker, that you were a member of this troupe of negroid entertainers.”

“Negroid entertainers,” to use Jeeves’ term, is the least offensive description applied in the book to the musicians, which gives a sense of how much they’re dehumanized. One character assumes that a black man is likely to be a thief. There’s repeated and careless use of a racial slur.

After his escape from the yacht, Bertie spends a good deal of time wandering around the village, hiding from people, and trying in vain to scrub his skin and acquire either butter or petrol to remove the polish. Wodehouse attempts to mine much comedy out of others’ reaction to dark-faced Bertie. An inebriated valet insists he’s the devil. A maid goes into seizures. Bertie is considered unfit for polite society until he’s white again. You get the idea.

Of course there’s a long and exhausting debate to be had over the way authors absorb harmful influences from their time and place, which needs to be properly contextualized when reading those authors later, lest they be judged by an unfair set of standards. And it’s possible to enjoy beloved authors while recognizing and being disappointed by the ways they dehumanized people of different classes, genders, races, sexualities, and other identities.

Ideas of what’s problematic in fiction can change rapidly. Interestingly, a 1998 radio adaptation of Thank You, Jeeves turned the minstrels into “hillbilly performers,” which itself could be seen as classist.

But the blackface/minstrelsy plot of Thank You, Jeeves is so startling, so extensive, and so recurrent as a source of attempted comedy that it spoils the book. This isn’t a passing reference to racial inferiority (although of course the casualness of that kind of reference would itself be symptomatic of a certain kind of racism). This is thoroughly embedded into the storyline, making it hard to root for Jeeves, Wooster, or any of the other characters implicated. (No black character is given a name or any dialogue, of course.)

How much is too much? Should we not be making excuses at all? Or should literature be approached more like history or anthropology, with caveats about cultural influences of the time? I’d love to hear from others.