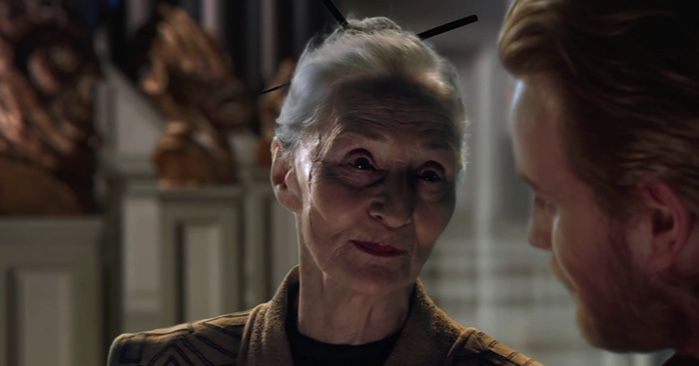 B-list heroes, however, haven’t gotten quite the same bump, and I can think of a few who deserve a little love and air time. Since the trailer for S2 of The Mandalorian dropped recently, let us deep dive into the Jedi Archive and get to know…

As was the case with most force sensitive children prior to the Imperial Era, Jocasta Nu was removed from her family at a young age and taken to the Jedi Temple on Coruscant to be raised and trained. She became a member of the Council at a relatively young age as well as a member of both the Jedi diplomatic Corps and a librarian. She chose to focus primarily on the latter and soon became chief librarian, though she still attained the rank of Master and trained several Padawans. Nu had many strengths, though her greatest weakness was an absolute confidence in the contents of the archives and the belief that if recorded knowledge did not exist therein, it did not exist at all (this proved detrimental to those attempting to prevent Padmé’s assassination during the Separatist Crisis as they were looking for a bounty hunter on Kamino and, indeed, for Kamino itself, but as Nu had never heard of Kamino and could find no record of it in the Archives, she insisted it didn’t exist. As we are all well aware, it did, and it played a huge part in the Clone Wars mythos).

Random note: as he spent a great deal of time in the Archives when he was a Padawan, Nu developed a close academic relationship and friendship with Dooku when he was studying under Qui Gong Jinn. She seemed neither particularly surprised nor very troubled when he went to the dark side.

Nu had a tendency to sort Padawans and Jedi into those worthy and unworthy of education in her mind. She made it very clear to one Umbaran Jedi in particular she thought he had no place in her Archive nor in the order; many felt it was her dismissal that ultimately turned him to the Dark Side and led him down the path to becoming the Grand Inquisitor who would murder countless force sensitive children and Order 66 survivors, and later capture, torture, and nearly kill Kanan Jarrus (once Padawan Caleb Dume) and Kanan’s Padawan, Ezra Bridger.

Nu herself survived Order 66 and did what she could to preserve the Jedi legacy by smuggling as many holocrons as she was able out of the temple and recording more, filling them with what information she was able to remember. Both the Grand Inquisitor, who had reason to hate Nu, and Darth Vader were informed that the librarian might still be alive, though only Vader was given instructions to bring her in alive; Darth Sidious hoped that she might have information that would help him sustain the Empire.

Nu didn’t yet have that information, but she realized it was still at the Temple and she would have to go back for a holocron containing the names of all the force sensitive children in the galaxy who had been identified prior to Order 66. When she arrived, however, she found the Grand Inquisitor already in the Archive. She was able to obtain the holocron without detection but confronted him on the way out, not recognizing him as the Umbaran Padawan she had once mistrusted. He reminded her and the two dueled; the Inquisitor was about to strike the killing blow when Vader stopped him. Nu escaped in the confusion.

After going several more rounds with Vader, Nu was captured and forced to watch as Vader scanned the holocron with the children’s names. That she revealed him as former Jedi Anakin Skywalker to his troops was of no consequence; once he had what he wanted, Vader killed Jocasta Nu.

The librarian did leave a legacy behind, however: the artifacts she left with her assistant before returning to the Temple and facing both the Inquisitor and Vader were sealed in a vault that was later uncovered by Luke Skywalker. He used them to help found his own Jedi Academy. Which…well, we all know how that went. But at least someone read the sacred texts.