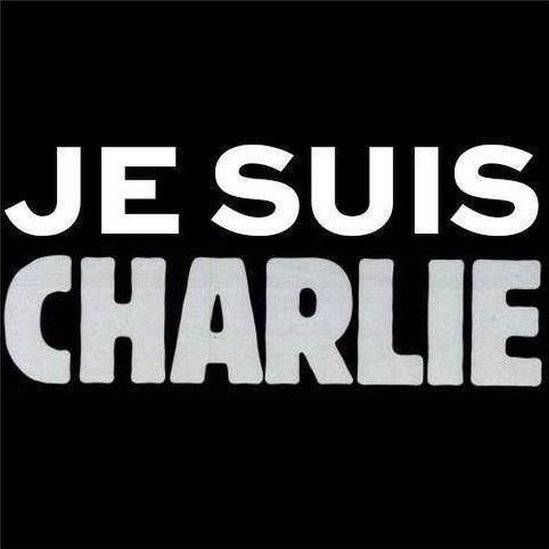 Editorial cartoonists are the court jesters of our time.

They speak truth to power. They uncover the absurdities of daily life. They mock the mock-worthy. They question authority. They challenge the establishment.

We are richer for their art.

Yesterday, in Paris, twelve people were shot dead at the offices of Charlie Hebdo, a satirical and controversy-courting publication well-known for its judicious use of editorial cartooning. Among the dead are four cartoonists, including the publication’s editor, Stéphane Charbonnier (known by the penname Charb), who had been living under police protection due to death threats. He was quoted as saying that he would rather die standing than live on his knees. The magazine courted controversy in 2006, when it republished the highly controversial Danish cartoons depicting the Prophet Muhammad; in 2011, the same offices were firebombed after the publication of a comic titled “Charia Hebdo.”

This issue was “edited” by Muhammad, with the speech bubble here reading, “100 lashes with a whip if you don’t die laughing!”

The tradition of cartoon satire is long and storied in France — during the French Revolution, depictions of Marie Antoinette in scandalous situations graced the pages of many papers — and often blends political commentary with obscenity and gutter humour. Charlie Hebdo is part of this tradition. Because it is a secularist left-wing publication, it has a specific political slant that colours the work it publishes. You may read editorials in the coming days suggesting that Charlie Hebdo is anti-Islamic; this is not untrue, but also not the whole picture. Charlie Hebdo is anti-religion, mocking and deriding sacred cows of all faiths. This is, after all, a publication that has been sued by the Catholic Church. Fourteen times.

Not everything Charlie Hebdo publishes is high art. Much of it, indeed, is puerile, facile, childish. We can look at a comic and be offended, disgusted, dismayed. We don’t have to like or agree with everything, or even anything, Charlie Hebdo publishes vis-a-vis religion or anything else. There are lots of very good think pieces out there today about the problems with what Charlie Hebdo has published over the years; we should read them and consider them thoroughly. We can discuss the notion that this is a racist publication or that it has published racist content. I wouldn’t necessarily disagree. It is important to remember: We don’t have to be Charlie Hebdo fans.

But we do have to stand with Charlie Hebdo in condemning violence that seeks to silence.

Where art is meaningful, it is powerful. Art has the power to disrupt, to enrage, to enlighten. Art expresses our experiences, our joys, and our frustrations. Political art and political satire give voice to the voiceless, offer challenges on behalf of the powerless, demand change and seek redemption. But they do these things by pushing the boundaries of what is acceptable, tasteful, and appropriate. Even what is acceptable. What we can stomach. It goes too far sometimes. That’s part of the deal. For political art to work, it has to be able to operate without fear of violent reprisal.

In 2012, the US State Department reacted to Charlie Hebdo’s approach to engaging with Fundamentalist Islam by calling the publication inflammatory: “We don’t question the right of something like this to be published, we just question the judgment behind the decision to publish it.” But is silence responsible, or does it breed only more silence, more fear, and more anxiety?

Freedom of speech, as we all know, is not ever freedom from consequence. But the appropriate response to a piece of art you disagree with is not violence. It is more art. Art in conversation. Art in challenge. Art in disagreement. Art in mockery.

We must stand with Charlie Hebdo.

Response by Loïc Sécheresse. You can view more cartoon responses to this horrific crime at Buzzfeed.