Real life can quickly become strange. It can only get stranger when you learn you can’t die. This happens to Jimmy Yee in the graphic novel series Demon. He tries to commit suicide in various ways but keeps waking up and finding his body intact. As Jimmy tries to figure out why, the government takes an interest.

Jason Shiga, independent cartoonist and author, has won the Eisner Award for Demon, and has just released the fourth volume. It is our honor to speak with him on Book Riot.

Congratulations on your Eisner win! How does it feel to have an Eisner Award, in November 2017?

It was just icing on the cake. Just getting the series published against all odds was the real win for me. When I was putting it out as a mini, I never dreamed it would be as successful as it turned out to be. As a cartoonist, I spend most of my working day alone, so I never really know if I’m communicating with anyone or just rambling nonsense to myself.

The letters pages, the serial nature of the story, being in control of almost every aspect of production. I feel now, comics are mostly personal like Persepolis or mostly genre. What I liked about the alternative comics of the ’90s in particular was the newfound sense that you could blend the personal and genre in really interesting ways. With Demon, I put everything on the page. I didn’t hide anything. 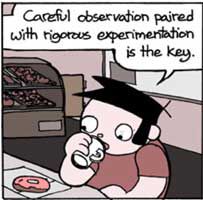 I have to admit, in book one, it made me giggle with horror when the lead found out he had a daughter who was still alive, but decided to repeat a suicide attempt anyway. What was the best part about writing the black comedy in the series?

I think my sense of humor naturally tends to go to dark places. The thought of death is so utterly terrifying to me, it can make me literally nauseated. I remember as a child ripping out pages of a songbook because they mentioned death and dying. To this day, I still have that sickening feeling like when I look into an infinite hall of mirrors. I’m an atheist too, so it’s not like I think there’s an afterlife. Just a permanent state of nonexistence forever. Hilarious!

What tools do you like to use for drawing? Do you prefer traditional or digital media?

I pencil with bic ballpoint pens, ink with a Windsor Newton 222 onto copy paper, and color with the paint bucket in Photoshop. That’s it. When I was younger, I thought I had to have a rapidograph or the right type of paper. But one of the big moments for me as an artist was realizing that every cartoonist I knew drew in a completely different way with completely different sets of tools. There was no one right way to do it.

In mainstream comics, there seems to be a struggle for POC voices to find room for stories, especially in the case of Marvel. What is your opinion on increasing diverse representation in comics?

I don’t know how insightful I’m gonna be about mainstream comics as I tend to work on my own projects, but from a business point of view, I think one key would be getting companies like Marvel or DC to think about the fact that white men are actually a minority in terms of potential readers. I only see the trend continuing towards an increasingly multicultural society and global world. And it’s not even like there’s a dearth of POC cartoonists working for those companies. They just happen to be working on these 70 year old properties.

For new readers who want to dive into your previously published works, what recommendations do you have?

For children, I’d recommend “Meanwhile,” a choose your own adventure comic book with over 3,856 different pathways through the book.

In an interview with Comics Beat, you mention that your next project is “a 600-page interactive comic with an automated memory system that unfolds into a cube.” Can you give us hints or snippets about it?

The interactive mechanism is gonna be hard to describe in words but in terms of story, the main idea is that the comic bounces back and forth between two worlds, almost like in the original Legend of Zelda game where getting tools or supplies in one world helps you get through the other. In the case of the comic, it’s about a science fiction writer.