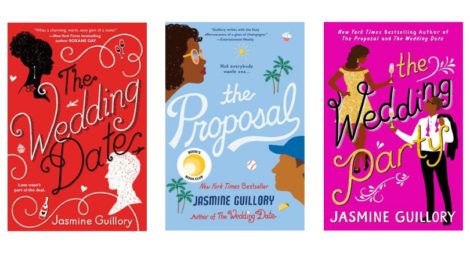 When I picked up The Proposal, I had no idea what I was getting into. Many an algorithm had suggested that it was just the book for me, but I put it off for quite a while. Man, those algorithms really know what they’re talking about! I should have known something was up when the cover looked more like a heady fiction novel than the traditional Harlequin or the watercolor of a Nora Roberts book. What I found when I cracked open this romance novel was a refreshing and surprising approach to a genre I have come to love, despite all of its cheese and cliches. Jasmine Guillory is an author delivering a fresh take in a way I never knew I always wanted.

Not only did The Proposal give me—a Black woman who never sees herself reflected in the redhead buxom heroines of traditional romance—a protagonist that I could get behind, it did so with an honesty and humor that I did not anticipate. Both leads in this modern romance, Nik Paterson and Carlos Ibarra, are people of color, and they talk about their race and cultures in a way that jives with my own lived experience and never once seemed heavy-handed. Moreover, they live in the real world and engage with texting and technology in a way that makes sense to anyone out here living the dating app life. Their banter is funny, relevant, and endearing. Their friends also feel like real people, not the blond, willowy women or perfectly chiseled manly men we typically get as sidekicks to our romantic protagonists. Nik’s best friends are a Black lesbian model and a plus-sized Korean chef. Carlos’s bestie is a nerdy white doctor marrying a Black woman. These are people I actually know, they talk like people I know, and they seem like the type of folks I might even go to brunch with.

And it’s not just identity and language that make Jasmine Guillory’s work a lovely surprise, it’s also the sex. What’s a good romance novel without a steamy love scene or two? Jasmine Guillory takes the romance novel into the modern day and does it with a subtlety that made me ask out loud as I read it, “Did she just do that?!” There’s expressly stated consent and there’s, dare I say it…oral sex. And not vaguely alluded to, as in most mainstream romance novels I read, but as a healthy, normal (and remarked upon) part of this couple’s sex life. The overall effect is a novel that made me flip ahead to the end to make sure there was a preview for her next book. I’m officially a convert and may never look at the genre the same again.

Jasmine Guillory is not your mom’s romance novelist, and this millennial, for one, is glad she’s showed up on the scene.