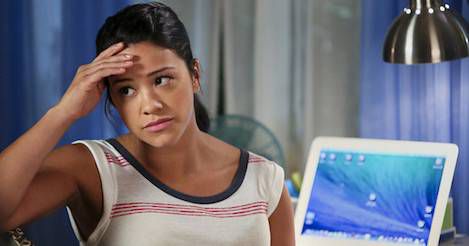 Allow me to be honest here: I haven’t been reading much lately. Instead, I’ve been watching a lot of Jane the Virgin. You know – that cotton-candy colored love letter to telenovelas currently airing on the CW? My brain hurt from writing term papers, and I just needed something sweet and funny. Jane the Virgin stars the doe-eyed Gina Rodriguez as Jane Villanueva, a 23-year-old aspiring romance novelist who accidentally becomes pregnant after a series of kooky coincidences and an accidental artificial insemination.

Anyway, in the most recent episode, Jane is struggling to find childcare while she finishes her novel, a steamy love story about salsa dancers. A real roadblock, however, is her brash grad school advisor, Marlene, who hates Jane and all her material.

In their first scene together, Marlene asks Jane what she’s trying to do with her novel. “Is it a book for bored housewives, or is it about something?” Ruffled, Jane says: “Both!”

It got me thinking. The housewife is an extremely vilified reader. She is the stereotypical target audience for bodice-ripper romance, trashy true crime, working girl fiction, and any other much-maligned genre on the shelf. The image of the bored housewife, curled up on a chair reading books in order to distract herself from her stifling, 1950s lifestyle, is one of the most prominent pictures of the Woman Reader out there. But others abound, too: how about, for example, the teenage girl devouring Sarah Dessen on her beach towel? It’s an issue, in part, of judging books by their covers, which often depict a pair of shoes, or some individual part of a woman’s body – a mouth, maybe, or a torso.

I share Jane’s indignation at the assumption that a book can’t be both written for women and “about something.” The problem is not necessarily with the books themselves. “Women’s literature,” as bookstores sometimes call it, is full of winners and stinkers like any other genre. The problem is this: by calling these books “women’s literature,” we women are told that this is our section, then we are ridiculed for actually liking the books it contains. This is the irony of the pastel dust jackets: romance (in its many incarnations) has always been dominated by women writers, and it consistently remains one of the highest selling genres. Either there are a lot of “bored housewives,” or there are a lot of people who read romance, period. But romance is still considered “pop” literature, not the preference of the serious reader.

In another scene, Jane is asking Marlene for an extension. As she is speaking, the sound of her son Mateo crying in the other room gets louder and louder, and she is distracted. Finally, the friend watching Mateo bursts into the room and hands the baby to Jane, and it is right then that Marlene refuses Jane the extension. At which point Jane bursts into tears.

It is a Big Visual Moment. For a moment, we see Jane as Marlene sees her: more concerned with her own “marriage plot” than a serious writing career. The image she projects is that of the romance reader: an emotional young woman, in a sundress, holding a baby. She is serious about writing, but it seems that her preferred genre (and the stereotypical femininity it connotes) will never let her be seen as a “serious” writer. So she gets kicked out of the club, too.

Still, as much as I think that “chick lit” needs to be cut a serious break, I can’t help but think that the conception of The Woman Reader could also use a makeover. In marketing books by women, about women, publishers and booksellers create the image of a woman buyer that doesn’t seem to have changed in years. For example, I was recently browsing on Thrift Books when I found myself in a subsection titled “Single Women,” in which all of the novels were about weddings. I couldn’t help but chuckle, not because they were “bad books,” but because my marital status was suddenly a factor in my reading. There was no “Single Men” section (what would that look like, I wonder?). My feelings were complicated, because on one hand, I had chosen to click on that section. If I wanted other types of books, I could have clicked on any other section – there are no rules to what I can and cannot read. On the other hand, that section was purportedly “for” me. It wasn’t called “Books About Weddings,” it was called “Single Women!” Staring at the first row of results, all the covers emblazoned with white dresses, was another Big Visual Moment for me.

I guess what I’m trying to say is that this Woman Reader (like most, I would assume) is somewhere between a Jane and a Marlene. Do I think that the pejorative way we talk about “chick lit” and romance has a lot to do with the fact that these are genres associated with the ultra feminine? Absolutely. At the same time, do I think there’s an issue with associating the Woman Reader solely with the ultra feminine pop novel? Yes. That too. It should be obvious: Women Readers are just readers. And books “for women” are just…books.

Which reminds me: now I’m caught up on Jane, I should probably get back to reading.