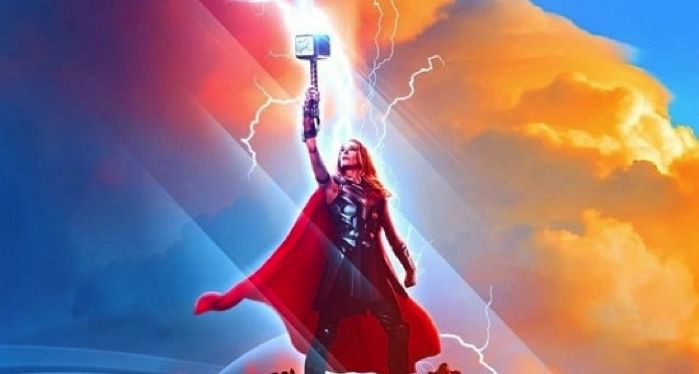 Thor: Love and Thunder is coming to theaters so very soon. The talk among all Marvel Cinematic Universe fans is Jane Foster wielding Mjolnir as Thor. This naturally brings comparisons between Jane Foster and Thor Odinson. What’s the difference? This idea was first introduced back in 1978 in What If…? #10. The version of Jane as the God of Thunder seen in the trailers is from Jason Aaron’s run on Thor, however.

Can we expect to see Jane wielding exactly same powers as Thor Odinson? To be clear, that is possible. This is the MCU, not the Marvel Universe, so they don’t have to (and rarely do) adhere strictly to what the comic books have done. That said, understanding the differences between these two Thors may give us some sense of what’s coming from Taika Waititi’s upcoming film.

Thor Prime. Thor the First. However you want to refer to him, this is the original Thor, son of Odin. God of Thunder from Asgard. Here’s a quick refresher of his powers:

Strength: Thor is top tier in terms of strength, able to lift over 100 tons. Even in the MCU, he went toe-to-toe with Hulk twice and pushed Stormbreaker into Thanos’s chest. Strongest Avenger, indeed.

Speed: Thor is a god and can move like one, particularly when he winds up and throws Mjolnir, hanging on for the ride. With Stormbreaker’s ability to open the Rainbow Bridge, he moves even faster.

Durability: Thor doesn’t bleed very often. He’s been in major slugfests with every Marvel baddie imaginable, and usually has the upper hand. Even if a powerful being lands a blow, Odinson is able to shrug most of them off. He can also survive in space or in the direct path of dwarf star.

Lightning: God of Thunder. Lightning, too. In the MCU alone, we’ve seen him call down bolts of lightning from the heavens, channel it through his body and weapons, and even gather storms for his use.

Flight: In the Marvel Universe, Thor can fly without his hammer. Other than a lightning-infused spin move in Thor: Ragnarok, the MCU version of Thor only flies with the help of Mjolnir or Stormbreaker.

Immortality: As a god, Thor has lived and will continue to live for a very long time. Versions of him in the Marvel universe have survived for thousands of years beyond Earth and humanity. Even according to the old Norse mythology, Ragnarok is a cycle of death and rebirth, extending life even longer.

Weapons: Thor Odinson is worthy to wield Mjolnir, which is no small feat. He also crafted Stormbreaker in the MCU, which doesn’t seem to have worthiness requirements, but it’s an impressive axe, nonetheless.

We know the MCU version of Jane Foster at least a little bit. She’s a brilliant scientist who didn’t let anybody boss her around. She showed great courage in the face of magical and intergalactic threats. With the upcoming movie, it looks like she’s worthy, too. When examining Jane Foster vs Thor Odinson, what are her powers when she lifts Mjolnir?

Strength, Speed, Durability, Lightning, Flight: See above. Yep, when Jane Foster lifted Mjolnir from the surface of Earth’s moon (oh, comics), she gained all of Odinson’s standard powers. She also got really cool armor including a half-mask that hid her identity from readers, heroes, and villains alike.

Electrokinesis: While Odinson calls down lightning, Jane Foster one-upped this. She discovered she could generate the lightning from herself. We’ve seen this from Odinson in the MCU during Thor: Ragnarok’s climactic battle. Expect more of this from Jane.

Control over Mjolnir: Jane had a different relationship with Mjolnir. While Odinson wielded it like a weapon with cool abilities, Jane started to communicate with the ancient artifact. She could control Mjolnir in mid-flight, sending it bouncing around between enemies, not just out and back.

But She’s No God

Likely the biggest difference between Jane and Odinson is godhood. As Odin famously told his son, he is “not the god of hammers.” As much as he loves his weapons, most of his powers are there with or without Mjolnir or Stormbreaker. Jane, on the other hand, is a human. A brilliant, worthy, fierce human, but just a human. In the comics, she was battling cancer in her human form at the time. Picking up Mjolnir and becoming Thor made her powerful, but it also purged all toxins from her system. Toxins like chemotherapy. Each time she lifted the famed hammer, she inched closer to death. When she sat Mjolnir down, she returned to her frail, human form.

So what will the MCU version bring to Jane’s Thor? Hard to say. The MCU likes to play with comic readers’ expectations, leaning in and steering away in equal measure. We’ll all find out soon enough.