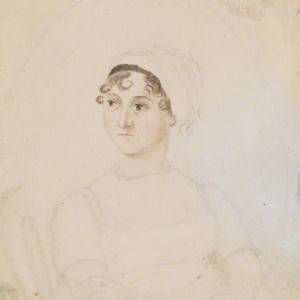 This is a guest post from Juliette Wells. Juliette created the new 200th-anniversary annotated edition of Jane Austen’s Emma for Penguin Classics. The author of Everybody’s Jane: Austen in the Popular Imagination, Juliette is associate professor and chair of English at Goucher College in Baltimore.

As a Jane Austen scholar who possesses a fine resting bitch face (as my current passport photo will attest), I am pleased to share with you that I have resolved a longstanding controversy among readers and critics. Austen—one of the most celebrated English novelists, and certainly the most beloved in our own era—was blessed with an RBF. 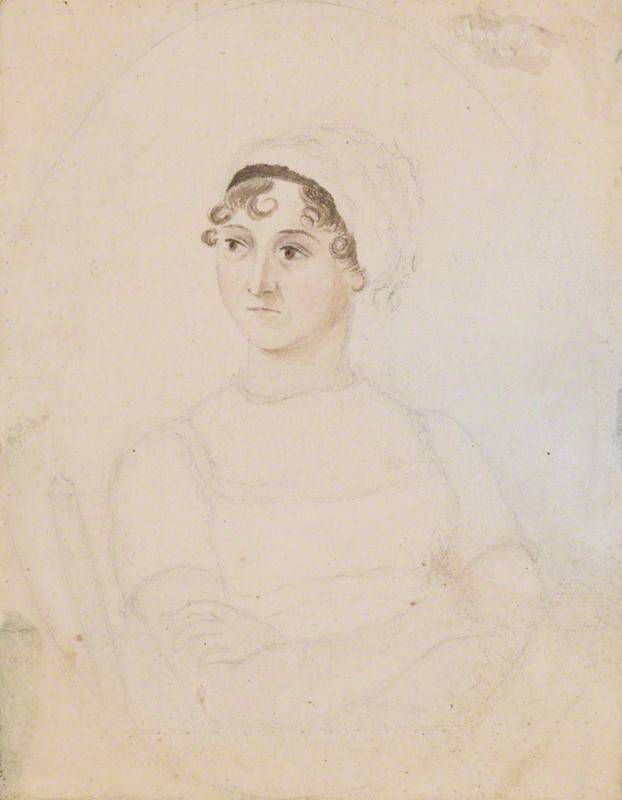 by Cassandra Austen, pencil and watercolour, circa 1810

My exhibit A is the only authentic portrait of Austen’s face drawn during her lifetime (1775-1817): this watercolor sketch, done by her elder sister Cassandra in approximately 1810, which is now in the collection of the National Portrait Gallery in London.  (Cassandra also left to us a portrait of Jane from the rear, which, while lovely, obviously doesn’t help us with the face question.) Just a year later, in 1811, Austen’s novel Sense and Sensibility would be released, the culmination of years of dedicated writing and aspirations to publish. Perhaps Cassandra took Jane’s likeness to commemorate, within their family, Jane’s new sense of herself as an author. We’ll never know for certain.

What we do know is that this tiny image has never sat well with the majority of those who love, appreciate, and study Austen’s writings. This face conveys none of her wit and wryness. Nor does this portrait, in either scale or execution, seem suitable as the only surviving image of a literary genius. In every sense—the pose, the medium, the level of finish—the image betrays that its creator, like so many gentlewomen of the time, was an amateur visual artist. Mutually devoted as Jane and Cassandra are known to have been, a sister was hardly the portraitist anyone would have chosen to honor Austen’s literary achievement.

During Austen’s lifetime, however, no one knew how highly her works would one day be valued. Her novels received respectful reviews and sold moderately well. Even the highest praise she received—from her fellow novelist Walter Scott, for Emma—stopped short of describing her as great.

Esteem for Austen’s writings grew throughout the nineteenth century, helped along by the publication in 1870 of the first biography of her, prepared by some of her surviving nieces and nephews. To accompany that biography, her family commissioned a new portrait, which significantly adapted Cassandra’s sketch to make it more appealing to Victorian viewers. Subsequent artists felt even freer to “improve” on the original. From our perspective, the results of these efforts are appalling. In the hands of the touch-up artists, Austen’s hair becomes curlier, her cap fancier, her bosom fuller; in one especially wince-inducing image, a wedding ring shows up on her hand. (Famously, Austen chose not to marry.)

These gussied-up portraits also noticeably soften Austen’s expression. The convention of nineteenth-century portraiture, whether in photography or older media, was to present a serious visage, and these images are no exception. But, while Austen isn’t outright smiling in these, neither does she look as grimly determined as she does in Cassandra’s original.

In other words: long, long before the condition of RBF was identified, these late nineteenth-century do-over artists did their utmost to de-bitchify Jane Austen’s face.

The idea of the RBF helps us see Cassandra’s portrait through, if you’ll pardon me, fresh eyes. “I’m not Mad.  That’s Just My RBF,” we can imagine Austen saying, in the words of a recent New York Times headline. Cassandra’s sketch conveys that her sister’s features, like those of so many impressive women in our own era, looked serious in repose.  In that sense, this portrait couldn’t be more appropriate. Austen took her authorship very seriously indeed, as we see with especial clarity in the letters she exchanged with her publisher, John Murray, and others during the publication process of Emma (which was released in December 1815). Despite pressure, she negotiated her own contract and stuck to her guns about her subject matter and style.

To date, no single depiction of Austen’s face has pleased everyone. Additional possible images from her lifetime have been debated, most notably the so-called “Rice Portrait” of a young girl and the depiction of an older woman put forward by biographer Paula Byrne a few years ago. (Byrne has also publicly decried the choice and treatment of the Austen portrait chosen to adorn a future British £10 note.) Attention, but not appreciation, certainly followed the unveiling of the “forensic portrait” by Melissa Dring, commissioned by the Jane Austen Centre in Bath. On the opposite end of the spectrum, Anne Hathaway’s Jane in the film Becoming Jane (2007) struck many as too glamorous.

Olivia Williams’s thoughtful, age-appropriate portrayal in the unfortunately titled television biopic Miss Austen Regrets (2008) comes closest to how I envision Austen (with necessary allowances for the unavoidable good looks of all actors). I’m also a big fan of Nigel Boonham’s cheerfully monumental sculpture “Jane Austen in Heaven.” But, mostly, I think that Austen—like all authors, like all of us—had the face that she was born with, and used it how she wanted.   If she did have an RBF, so what? I care about her writings, not about her looks.

But, since it takes one to know one, I can say this with certainty: the most brilliant smiles start from a resting bitch position, because the contrast is most stunning. Imagine yourself saying something so amusing to Jane Austen that her face lights up. Could there be a more potent readerly fantasy than that?