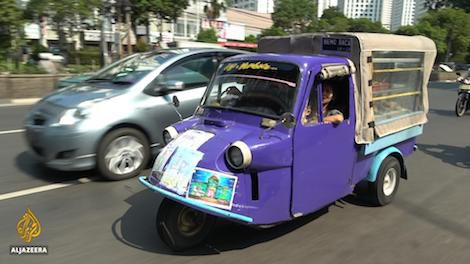 Sutino “Kinong” Hadi was not even 10 years old when he dropped out of school.

Now in his late 50s, he has spent most of his working life driving a tuk tuk, known in Indonesia as a “bemo”. The three-wheeled vehicles were a popular mode of public transport until they were banned in Indonesia‘s capital, Jakarta, last year in an effort to reduce pollution.

Kinong’s bemo, however, is still on the road.

The government gave him a special exemption from the ban, since his bemo no longer carries passengers – but books.

Most weekday mornings, he visits schools in some of Jakarta’s poorest neighbourhoods, providing disadvantaged children access to books.

Your feel-good reading and viewing of the day.

Given the deluge of movies, TV, and tweetstorms, it may be more important than ever for publications to help books accomplish these goals. But the best format for them to do so is likely no longer the traditional, single-book, literary review. To break through the noise, editors must translate old-fashioned book coverage to the lingua francas of today’s impossibly paced media climate: shareable lists, essays, digestible Q&As, podcasts, scannable email newsletters, hashtags, Instagrams, even book trailers.

“You can have a blog post that at least draws people’s attention to the book. Maybe they’ll read it, maybe they won’t. But at least the ideas from the book will filter through into the conversation,” Kachka says. “I think it’s important to get those ideas in, so books can have an influence beyond their readership, whatever it might be.”

Bill Gates’ book lists are an influential force in publishing, capable of giving a title a sales bump. On Tuesday (Dec. 4), the Microsoft founder shared his favorite books of 2018, which he says is “pretty eclectic” and has “something for everyone.”

True to form, Gates’ 2018 favorites are all nonfiction, and touch on subjects as varied as autonomous weapons and mindfulness (he rarely picks up fiction). Here are the five books, linked to his comments on each.

Includes Educated, which has been on so many lists.