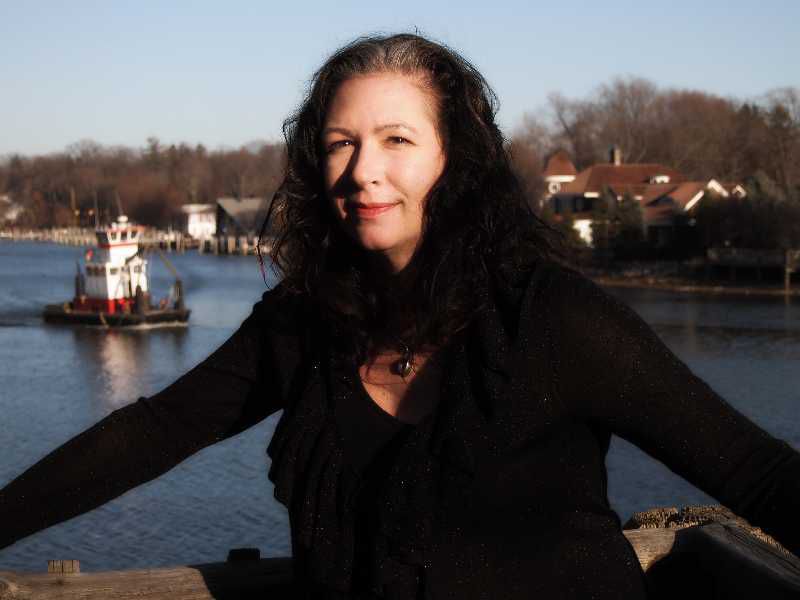 Jacqueline Carey has become a staple of feminist high fantasy ever since her first epic, Kushiel’s Dart in 2001, that sparked an epic, sex-positive trilogy. She has continued the Kushiel’s Legacy series with spin offs, starting with Kushiel’s Scion and Naamah’s Kiss. Carey continued to work in epic fantasy with the Tolkein-based Sundering series consisting Banewreaker and Godslayer, later moving onto the Shakespearean Miranda and Caliban. Since then, Carey has created the superheroic world of Santa Olivia and the urban fantasy Agents of Hel.

With Starless, Carey comes back to an epic, heroic fantasy. Starless focuses on a warrior named Khai, a warrior with a peculiar destiny tied to a princess in a world where the stars have been cast down to their planet. I was lucky enough to contact Carey and ask her about her latest. Note that there are a few small spoilers ahead. 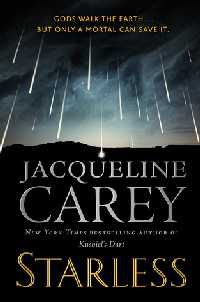 Book Riot: What served as the inspiration for the story in Starless?

Jacqueline Carey: In some ways, it adheres very closely to the classic structure of epic fantasy—there’s a foreordained hero, a prophesy, a dark god rising. What I tried to do was put an innovative spin on every aspect of the journey.

BR: Your books (in particular those that take place in Terre d’Ange) have fascinating religions in them that are inspired by other real life beliefs or mythologies. What religions or mythologies inspired the world of Starless?

JC: None! While I did draw extensively on existing history, religion and culture for the theology in the Kushiel’s Legacy series, this world and the gods that inhabit it are wholly the produce of my imagination.

BR: Do you have a favorite god or goddess that you created?

JC: I’m going to go with Ishfahel the Gentle Rain, just because I love that moment of visual transformation from immense, serene goddess to living landscape and back.

BR: You have mentioned in other interviews that you read a lot for research, but what did you read for fun while writing Starless?

JC: Traditional publishing is not an industry known for speed, which is by way of saying that, with apologies, I have absolutely no recollection of what I was reading for fun at the time. But I can say that New Weird authors like China Miéville [Perdido Street Station]  and Jeff VanderMeer [Annihilation]  had an influence on my world-building for this book.

BR: Are you planning a sequel? The story itself is epic and could be standalone, but you also leave some of it open to a sequel. Is that being planned or did you want to keep this its own story?

JC: No, it’s totally intended to be a standalone, which I understand is something of a rare beast in epic fantasy these days! As much as I love a good series, sometimes it’s nice to enjoy a sumptuous, satisfying meal of a book without being left hanging for months or years on end for the next course.

BR: There are a number of different languages and dialects to really give a sense of character. There’s Brother Yarit’s crude vernacular, the Elehuddin whistling language, the Therinian double-speak, and more. It’s pretty clear you had a lot of fun writing and crafting a lot of the dialog with all these disparate voices; which one or ones did you enjoy the most?

JC: Let me be honest, I can be casually foul-spoken, so Brother Yarit’s crudity was the easiest to write, and I did enjoy the way it played against the more mannered dialog of other characters. The Elehuddin language of whistles and clicks was an interesting challenge, because I couldn’t render it phonetically—okay, I could have tried, but I don’t think it would have scanned well—so I had to figure out ways to get enough on the page for readers to construct and hear it in their own minds.

Therinian double-speak was fun…to an extent! This is a culture that worships a (literally) two-faced god, and saying the opposite of what you mean is actually a form of reverence. As one might imagine, this becomes a bit exhausting.

BR: There’s a lot of wonderful gender-play and gender fluidity remarked cross-culturally throughout Starless. How did you begin to approach that in your writing process?

JC: Okay, mild spoiler alert! You might suppose this is in response to contemporary cultural trends. That is not, in fact, true. In 2014, I read an article by the author of The Underground Girls of Kabul about the surprising—and surprisingly commonplace—practice in Afghanistan in which a family without a male child designates a daughter as an honorary son. She becomes a “bacha posh,” which according to the author translates from the Dari language as “dressed like a boy;” is given a boy’s name, dressed in boy’s attire, and for all extents and purposes, treated as a boy, with all the attendant rights and privileges. However, when either a) a son is born to the family, or b) the bacha posh reaches puberty, they’re expected to resume a female identity. Obviously, this is pretty damn traumatic.

So, that was my inspiration for deciding that Khai would be “bhazim,” a term I coined to mean “honorary boy,” which was the only way the all-male desert warrior sect in which he was raised could fathom rearing a female child. It sets the stage for a profound sense of betrayal on his part when he learns he’s not biologically male.

The gender fluidity of my sea-dwelling Elehuddin was inspired by the fact that there are species, like clownfish and moray eels, that can literally change gender under certain circumstances. I wanted to provide Khai with an example of non-binary gender identity in a way that felt integral to the world I created. And of course, in a sense it’s nod to Ursula K. LeGuin’s classic The Left Hand of Darkness.