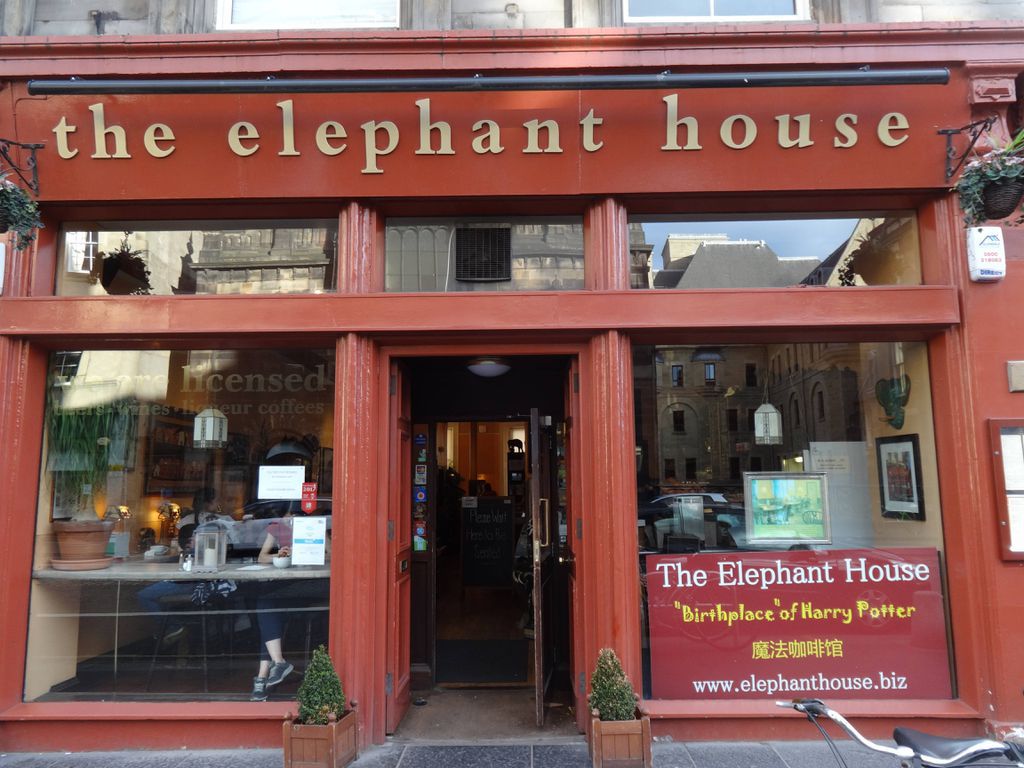 This is a guest post from Emily Polson. Emily is a writer, reader, and traveler from Iowa who has visited twenty-one countries and lived in three. Her first publication was an article in Muse magazine about her summer job as a corn detasseler. She’s a Slytherin, an amateur ukulele player, and a Peter Pan enthusiast. Twitter: @emilycpolson Blog: emilycpolson.wordpress.com

Harry Potter and the Philosopher’s Stone turned 20 while I visited Edinburgh in June, and I spent my three days there in a Potter-themed flurry of tourism. I stopped by Greyfriar’s Kirkyard to see the infamous gravestone of Thomas Riddell, considered the similarities between George Heriot’s boarding school and Hogwarts, and even chanced upon a pop-up event in the Scottish National Library celebrating the book’s anniversary. The most magical part of my trip, however, was a stop at The Elephant House, a café in which J.K. Rowling retreated to the back room to work on the first Potter book, where wide glass windows frame a view of Edinburgh Castle.

I was traveling alone, so when I entered the eclectically decorated café (which stays true to its elephant theme), I anticipated a quiet meal throughout which I would journal in some attempt to channel the ghost of a genius that once frequented these same tables. It was not to be so.

I ordered my dinner and took out my notebook, but I couldn’t focus on my own words. To my left sat a family of four with two preteen children excitedly discussing piles of paper they had found stuffed in the drawers of their table.

One of the kids turned to me when he caught me looking. “Do you want some?”

“Letters,” he replied, and handed over a stack.

They were written on postcards, scraps of paper, and even napkins: letters to J.K. Rowling telling her what she meant to her readers and what their circumstances were for visiting the Elephant House. I got lost in other people’s memories like Harry did when he took a dive into the pensieve: 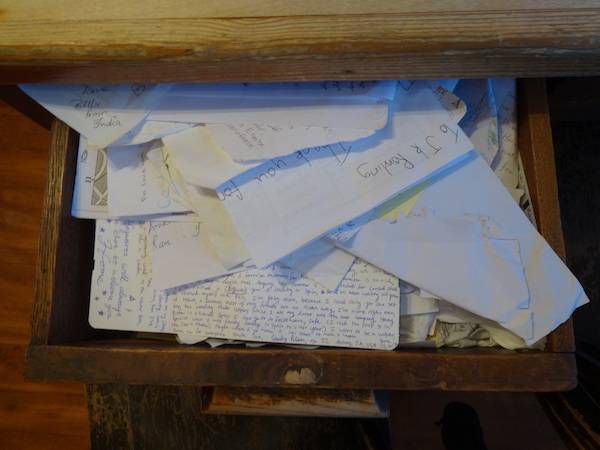 “Thank you J.K. Rowling for my childhood,” wrote Tamar from Florida.

“Dear J.K. Rowling, I love harry potter. I’m on book 2 and I’m loving it. Thank you for harry potter,” said Orla from Dublin.

“Your books some dope sh*t. Hella trill af. Live the dream!! You da real MVP,” said Nate from Chicago. “But seriously your books are amazing! They have inspired me to be creative.”

“Excuse me,” said the couple at the table to my right. “Are those letters?” I nodded and handed them the stack I had finished reading.

“Here are more,” said the boy to my left. I continued reading, even more entranced.

“J.K, it’s kind of amazing that I’m here in Edinburgh sitting in the same café that you wrote Harry Potter. I’ve been studying in London for the past few months (I’m from New York) & it’s interesting to see how you’ve inspired so many different cities. You probably wouldn’t remember, but I met you once during a book signing. I was about 10 years old & you stopped to talk to me about my holographic snake necklace. That was nearly 11 years ago. I’ll never forget it!” wrote Susan.

There was one paper with notes from four girls who visited from Spain. I’d spent the last year living in a small town in northern Spain, and I was delighted I had improved my language skills enough to translate their notes:

“Thank you for your books and for making us pass a beautiful afternoon here where you wrote.”

“The best story of magic.”

“You created a world for people who wanted to live.” 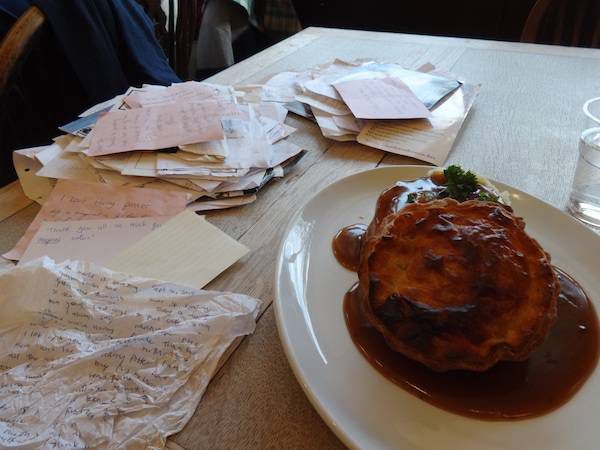 I imagined the four Spanish friends not only perusing the letters but also growing up with Harry Potter just like I had, loving the same characters and stories from another corner of the globe in a different language.

The couple to my right wrote a note before they left, and I spent a long time crafting my own on the back of my boarding pass to Edinburgh. By the time I finished, both tables had cleared and a new family had been seated to my left. They quietly enjoyed their coffee and cakes without paying any attention to the papers peeking out of the overstuffed drawers. I loitered for a bit, wanting to leave my note but not wanting to disturb the family at the table. I read a few articles posted on the walls about the café’s Rowling connection, then remembered there was one more part of the café I had to visit: the ladies’ toilet.

The walls were covered with graffiti—quotes from the books and even more notes to Jo.

“You taught me how to read, love, and believe.”

“Thank you for making my childhood magical.”

One of the articles I read said that at first the owners tried to paint over the graffiti, but every time they did more people would write notes. Eventually they gave up and embraced it. When I left the loo, the letter-table was empty again. I walked quickly over, tucked my note in the drawer, and turned to leave.

“Excuse me,” said a man who was sitting with a woman at a nearby table. “What’s in the drawers?”

I went to the front and paid, and when I took one more glance at the back room, the man’s companion was standing at the table, my boarding pass in her hand.

Sometimes I see a stranger and wonder about their life—what they’re like, where they’re from, why they’re here, what their struggles are. The notes I read provided that kind of insight into the lives of strangers. I smiled to think that moments before I was just a nameless face to this woman. Now she had read a piece of my life’s story, and I had become part of hers—she could go home and tell her friends about her visit, about the girl she met whose note she read. I was part of what made the Potter experience real for her, part of this web of people who are all connected by something that exists primarily in the hearts and minds of a generation.

That is the magic of Harry Potter, and why Hogwarts—in its many earthly forms—will always be a kind of home for me, no matter where I am.