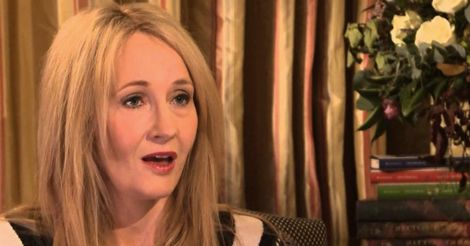 Donaldson worked for Rowling from February 2014 until April 2017, and is denying all claims. Specifically, she’s been accused of making a series of unauthorized purchases including: $1,900 worth of candles, $2,100 at Starbucks, and $1,577 on two cats. (Adopt don’t shop!!!)

Okay, so we’re exaggerating with the “terrible, horrible, no good” but J.K. Rowling’s assistant is accused of some serious unauthorized purchases and we have questions: What kind of cats are those?! And are they witchy candles?!

I already knew what I thought about wrongful incarceration. I mean, that’s why they call it “wrongful.” To write a novel, I need to find a question I don’t readily know the answer to. That’s how I became interested in the collateral effects. Their problems as a couple are similar to anyone’s, but because of his situation the heat is turned up so high.

What really brought it together was when I overheard a couple arguing at the mall. She said, “Roy, you wouldn’t have waited seven years for me.” And he said, “This would never have happened to you.” That’s when I knew there was a story there. I do sometimes wonder if they might have been talking about something completely different. Maybe he was in the Peace Corps.

Tayari Jones talks about her latest novel An American Marriage and how it’s changed her life.

🌟 BIG NEWS FOLKS 🌟
What we've all been waiting for this since our absolute obsession with #TheNightCircus…@erinmorgenstern is returning with a magical, timeless and wholly original love story set in a secret underground world. Is it too early to start counting down the days? pic.twitter.com/zYp24PgxET

The Author of The Night Circus wrote another book and that ear piercing scream you heard was our excitement as we did gimme-gimme hands and muppet arms—we are talented, we can do both at the same time!