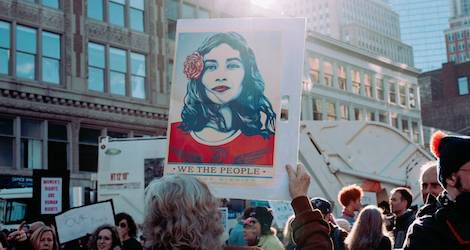 International Women’s Day always feels timely; to say that this year it feels more timely than ever is to repeat ourselves from last year. And yet, women’s lives, rights, and livelihood are under serious and continued threat. Planned Parenthood, a mainstay of access for many women to basic and lifesaving healthcare, is facing serious plans to defund it. President Trump not only reinstated but expanded the “global gag rule,” which blocks US federal funding for non-governmental organizations that include abortion counseling or referrals, potentially costing worldwide health programs $9.5 billion dollars. His administration withdrew guidance to schools regarding transgender students’ right to use the bathroom matching their gender identity. To put this in perspective, there are no statistics for transgender persons harassing others in restrooms, while 12% of transgender youth reported being sexually assaulted in school settings in 2011. Globally, women earn 24% less than men, and at the current rate of progress (assuming we continue to make any), it will take till 2069 to close that gap. In literary news, the winners of the 2016 National Book Awards were all men, continuing the industry’s gender gap for rewarding authors’ work. A recent essay by Bonnie Nadzam reminded us that women are still routinely harassed and abused, both emotionally and physically, by acclaimed men in the publishing industry. This is, of course, just a reflection of a much broader problem: one in four women have been victims of severe violence by an intimate partner in their lifetime (and women with disabilities are even more likely to experience domestic violence than those without).

Recently, a listener of the Get Booked podcast wrote in asking for books to help convince a male friend that feminism is still necessary. While we have many great books to recommend, I present the above paragraph as back-up. I present the Women’s March on Washington, which may have been the largest protest in US history. I present the Women’s Strike, in honor of which we are celebrating IWD a day late. And I present a few highlights of the past year, where we did actually see change. In pop culture, Hidden Figures brought us the story of the black women who made the space program possible. Roxane Gay was hired as Marvel’s first black female writer. There are a record number of women of color serving in Congress this year: 35 Democrats and three Republicans. To put that in perspective, there are 535 voting members of Congress, 104 (or 19%) of which are women. As of 2015, women were 49% of the global population. Feminism’s goal is to bring about the social, political, and economic equality of all genders. Until those numbers match up, until millions of women don’t feel compelled to take to the streets, until we’re not still “discovering” women’s contributions to history, until we’re done with “first”s and “only”s, until our opportunities and safety match those of our male peers, we need feminism.

International Women’s Day celebrates the social, economic, cultural and political achievement of women, and this year’s theme is “Be Bold for Change.” So today on Book Riot, we’re delighted to present bold women writing about the things that are important to them. Heroines, fandom, body image, queer literature; the topics vary as widely as our writers’ tastes, personalities, and geographic locations. Read, get inspired, and join us in continuing to strive for the changes that will make our world truly equal.

To Reach The Farthest Sea

Bae Suah muses on the process of discovering the heroines of her novels.

On the struggles faced by Latin American women writers to have their work recognized.

Books for the Jewish Feminist

A short list of buzzed-about female authors from Latin America.

Books about feminism by black authors to read ASAP!

Romance Without Feminism is No Longer an Option

On the feminist nature of modern romance novels, with reading recommendations!

Madonna and the Madwoman: On the Women of Jose Rizal’s Classic Noli Me Tangere

Keah Brown discusses five women of color who are making the world a better place through their creative work.

Fictional characters who are breaking harmful stereotypes about women.

On Writing as a Woman

A consideration of the expectations placed on women writers.

Four books from French writers, all celebrating the life of women.

Travel The Universe With 11 Short Story Collections By Women

Short stories have become a sandbox for formal, stylistic, and ideational experimentation. They can also help us re-imagine womanhood and women's lives.

Seeing Myself (and Mama Cass) in Comics

Pénélope Bagieu talks about the reasons she chose to work on a graphic-format biography of Mama Cass.